These two systems meant 2020 was the sixth straight hurricane season to start early – before the official start date of June 1.

This is prompted meteorologists to question whether hurricane season should start in May rather than June. 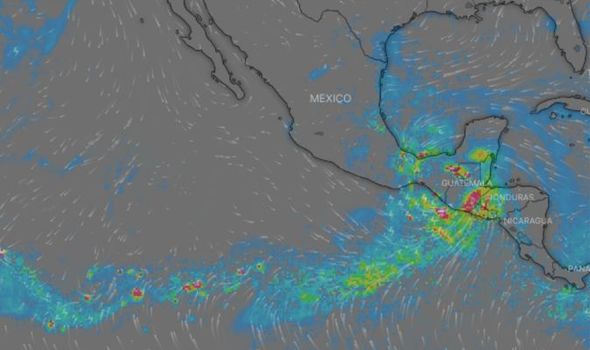 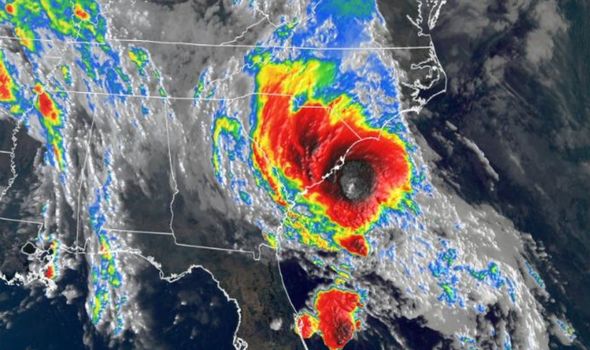 Only five other Atlantic seasons on record have produced two named storms before June 1, and all but one of these was more active than average.

This may mean the Atlantic is set for a very active hurricane season this year.

The most recent season to follow this pattern was 2016, with a very early January Hurricane Alex in the eastern Atlantic Ocean.

This was followed by a late May Tropical Storm Bonnie off the Southeast coast. 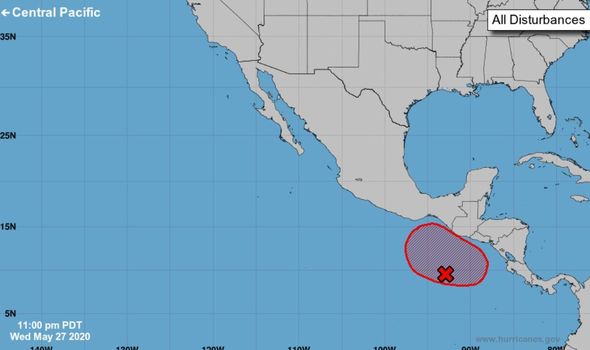 Elsewhere, a new area of low pressure has been spotted in the Eastern Pacific.

According to the National Hurricane Center (NHC) this trough of low pressure is producing a large area of disorganised showers and thunderstorms.

It is currently located a few hundred miles south of the coasts of Central America and southern Mexico.

Environmental conditions appear conducive for gradual development of this system, and a tropical depression is likely to form this weekend while it drifts northward.

The NHC states there is currently a 30 percent chance of cyclone development within 48 hours, and formation chance within five days is high at 80 percent.

The NHC wrote: “Tropical cyclogenesis is possible in association with Central American Gyres.

Cyclogenesis is the development or strengthening of an area of low pressure in the atmosphere, resulting in the formation of a cyclone. 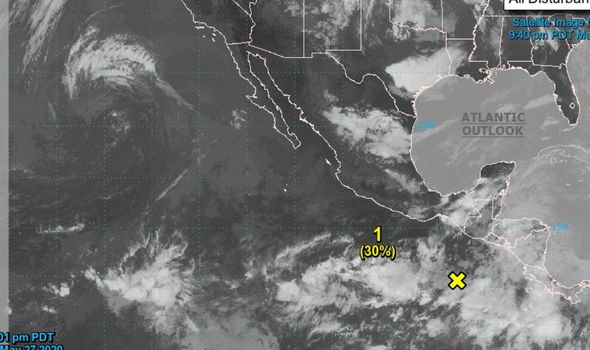 However, regardless of development, this system is expected to produce heavy rainfall over portions of Central America and southern Mexico beginning late this week and continuing through the weekend.

These rains could cause life-threatening flash floods and mudslides, especially in areas of mountainous terrain.

Those in the areas affected are advised to check local weather reports for information.

Pacific hurricane season officially began on May 15 and will run through to November 30.

The first named storm of the Pacific hurricane season has not yet occurred, and when it does will be named Amanda.

In 2019, the first named storm was Alvin which began to form on June 12 – this later developed into a hurricane reaching a category one hurricane with 75mph winds.

Of these hurricanes, four were major – and the strongest was Hurricane Barbara, which reached category four status with maximum sustained winds of 155mph at its peak.

A low-risk scenario where pupils in England would attend school on alternating weeks was presented to the government as the most likely way to gain popular support before ministers instead settled on their plan for a widespread reopening on 1 June, newly published papers have revealed.

The government’s plan for reopening schools to entire classes of reception, year 1 and year 6 pupils on 1 June was not among the nine scenarios modelled for Sage by the Department for Education. But one of the scientists’ preferred options of splitting classes and having pupils attend on alternate weeks, which they said had “particular potential merit”, was passed over.

The papers of scientific advice prepared for Sage and its subcommittees reveal high levels of uncertainty around different scenarios for school reopenings, and over the likelihood of transmission of the Covid-19 virus by children of different ages.

One of the most recent papers, discussing the effects of increasing school attendance on transmission, concludes: “There is substantial uncertainty, with the relative contribution of school openings being driven also by the relative susceptibility and infectivity of children of different ages compared to adults, as well as the extent to which social distancing is or is not sustained in the wider population.”

The stash of documents released by Sage and the government on Friday afternoon show the scientific advisers wrestling with questions of how easily children could transmit coronavirus, with the experts conceding that exposure outside the schoolyard was likely to be highly influential.

Collectively, the scientific advice appears to do little to assuage fears among parents and teachers over the potential risks in reopening schools to reception, year 1 and year 6 as soon as 1 June, as Boris Johnson pledged earlier this month. On Thursday the governments of both Scotland and Northern Ireland announced that schools in those countries would not return until after the summer holidays.

A modelling paper stated: “The modelling consistently suggests that resuming early-years provision has a smaller relative impact than primary school, which in turn has a smaller relative impact than resuming secondary schooling. However, this analysis does not incorporate potential for indirect impacts on contacts outside of school – which may differ by age of child.”

The modelling of infection spread – carried out by four institutions, including Public Health England – also did not account for the activities of children within schools: “It is important to understand what is going on inside of the school (eg physical distancing, hygiene measures, and more). The potential effect of such actions is not incorporated into the modelling.”

Sage looked at the modelling for nine different scenarios outlined by the Department for Education, from total closure to full reopening. But none of the published scenarios included the three year groups that the government eventually chose.

The committee that examined the modelling appeared to favour two scenarios that would have split both primary and secondary school classes and have different groups of children attend on alternate weeks, labelled scenario seven, which would have seen a low level of potential transmission according to the four results.

The recent paper on modelling continued: “Scenario 7 (alternating one/two weeks on, one/two weeks off) may be a good way to stop extensive transmission chains in schools. When this effect in schools is embedded into the wider community, the impact is less strong, but still has some value in reducing overall R.” But it added: “The modelling of Scenario 7 is the least robust of the scenarios, and further exploration is needed.”

“Scenario 7b, where children alternate in and out of school on a weekly basis, was perceived to be potentially preferable – both developmentally and practically – for young children and working parents.”

Dear Gavin Williamson: teachers like me can no longer look to you for leadership | Gary Collins

The group looking at the role of children in transmission was most supportive of the reopening option involving split classes coming in on alternating weeks, across both primary and secondary schools.

“Although not initially one of the options proposed by DfE, options 7b (classes split in two, with children attending on alternate weeks) emerged from the joint discussions as having particular potential merit for further consideration,” according to one paper prepared for a meeting on 30 April, just days before Boris Johnson’s announcement on 10 May that primary schools would reopen.

One paper prepared by Sage’s modelling and behavioural subgroups on 16 April warned that, as a result of school closures, some children would have “experienced a shock to their education which will persist and affect their educational and work outcomes for the rest of their lives”.

The experts conceded that “many children will adapt and be just fine”, with lockdown providing some families the chance to “bond more closely”, but they raised serious concerns about children who were already vulnerable, in particular those with special educational needs and disability.

A period of home learning, they added, would reinforce existing inequalities between children, while months off school would mean emerging learning difficulties were missed.

The volcano is experiencing new activity after 800 years without erupting. Since January 21, the Reykjanes peninsula south-west of Iceland’s capital, Reykjavik, has experienced over 8,000 earthquakes and about 10cm of land uplift due to subterranean magma intrusions.

Dave McGarvie, a volcanologist at Lancaster University, said: “It seems that after being relatively inactive for many centuries, this region is waking up.”

The affected area is located near the town of Grindavík and the popular Blue Lagoon thousands of tourists visit ever year, as well as being nine miles away from Iceland’s international airport.

Although the volcano has not erupted in about 800 years there have been more recent eruptions offshore.

Geological studies show the area is surrounded by five volcanic systems, which become active at the same time roughly every 1,000 years. 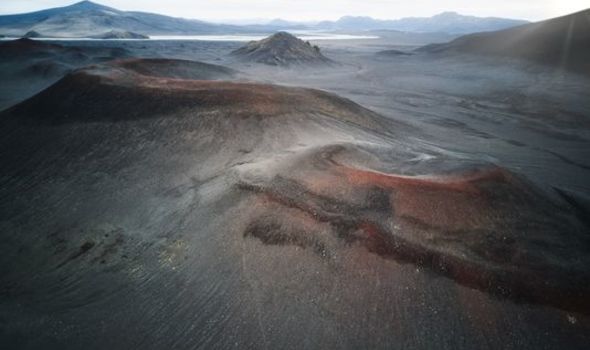 Typical Icelandic volcanoes wake for a few years and then die down.

Contrarily, this particular region can have on and off eruptions for up to 300 years.

Fissures of up to five miles splutter streams of lava, usually without much ash or many explosions. 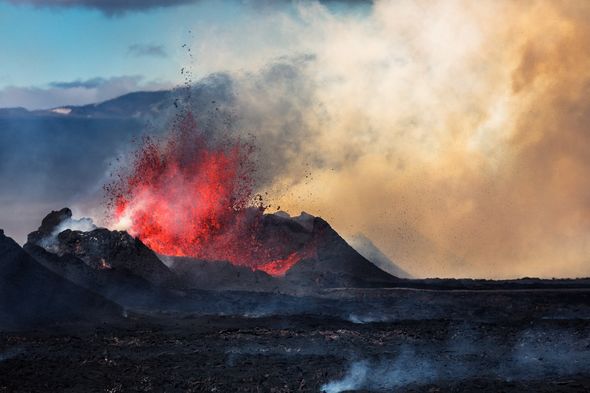 There were or more different eruptions, each lasting weeks to months, with gaps between them of up to 12 years without any activity.

Volcanic rocks travel tens of kilometres in the wind and written sources report the rockfall being an issue for livestock.

If something similar happened nowadays the Iceland GeoSurvey calculates that runways at Keflavík airport could be coated in 0.78 in of ash, causing flight to be cancelled temporarily. 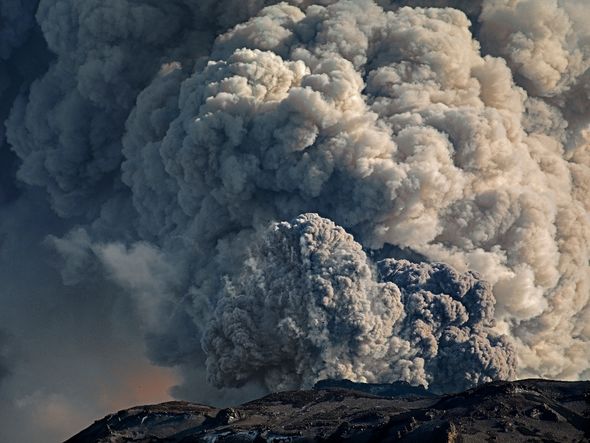 McGarvie said: “Wind direction during times of ash production is critical – anything with a slight northerly aspect is going to cause problems for the international airport and the metropolitan area of Reykjavík.”

Kristín Jónsdóttir from the Icelandic Meteorological Office commented: “The worst-case scenario is if lava flows towards the town of Grindavík.

“There is also other important infrastructure in the vicinity including a geothermal power plant.

“Hot and cold water supply may be at risk, along with roads, including the road between Reykjavík and Keflavík airport.” 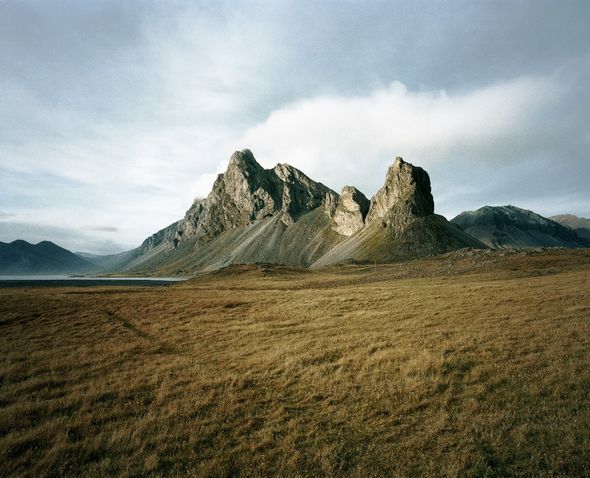 While volcanic activity is not a rare occurrence in the country Icelanders are likely to be paying this volcano close attention.

McGarvie commented: “People on the Reykjanes peninsula, and their descendants for several generations, may have to be on their guard and ready to evacuate every so often.”

Small and intermittent eruptions are easier to deal with than large torrents of lava like the 1783-84 Laki eruption.

If history would repeat itself it could be catastrophic for Iceland.