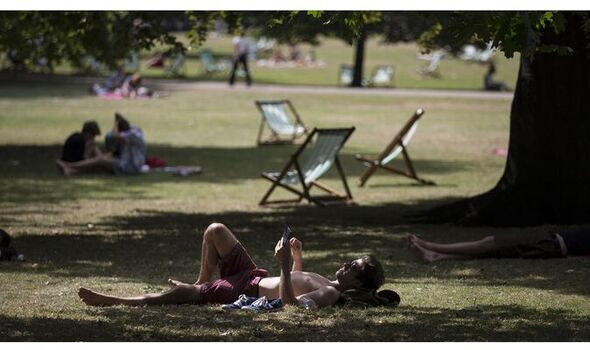 BRITAIN is facing a weather roller-coaster with temperatures to smash 70F this week before giving way to a freezing easterly blast. A tropical plume from the Continent pushing the mercury around 15C higher than average will plunge Britain into an early spring steam bath. Warm air dragged in by a colossal high-pressure system stretching across Scandinavia promises burst of spring glory.

But Britons are warned to make the most of the fine weather before the gates fling open to the freezing fury of the East.

Temperatures from next weekend will nosedive with sub-zero winds putting parts of the country back on snow alert.

The best of the weather this week will be confined to southern regions which could see highs of 20C.

Jim Dale, meteorologist for British Weather Services, said: “High pressure over Scandinavia will pull warm air in from the Continent this week with temperatures to peak around Thursday.

“This is not going to be everywhere though, and the highest temperatures will be confined to the Southeast and southern-central parts of the country.

“But we are definitely going to see a taste of spring this week.”

The weather will make a dramatic U-turn after the weekend as colder air sweeps in from Russia, he added.

High pressure will shift to steer winds in from the east bringing a return to frosts and even a touch of snow, he warned.

He said: “The high pressure starts to regress and then, wham, it starts to turn colder as we go into an easterly airflow.

“This is going to bring cold air in from Russia where a tongue of very cold air is bringing severe wintry conditions.

“We will see temperatures drop, and there will be the risk of frosts and maybe snow over high ground in parts of the country.”

Warmth will arrive after a soggy start to the week with rain to spread across Britain before the weather cheers up, experts say.

Netweather’s Ian Simpson said: “There are signs that high pressure will build around the middle of next week, bringing in a spell of more settled weather.

“Through Tuesday and Wednesday, we can expect a band of rain to spread slowly south-eastwards across the country.

“It will turn very warm for the time of year away from south and east-facing coasts, with highs of 17 to 19C in parts of England and perhaps even 20C locally.”

However, easterly winds threaten to bring the warm weather to an abrupt halt at the weekend, he warned.

He added: “There is the potential for it to turn colder from the east towards next weekend, but that is a long way off and subject to change.”

Nevertheless, models are once again hinting at a turnaround allowing cold air to sweep in from Russia after this week.

Warmer weather will arrive this week before the risk returns next weekend of a late winter blast, according to weathertrending meteorologist John Hammond.

He said: “It’s a drier and warmer trend to look forward to across the UK through mid-March.

“The low pressure, which is currently closing in on us, will be squeezed out as high pressure builds through the week.

“Later in the week, some computer models attempt to bring much chillier air in on a strengthening breeze from eastern Europe. I’m somewhat sceptical.

“They tried this a week or so and it came to nothing. But it’s one to watch.”

In the meantime, Britain is bracing for more wind and rain through the next couple of days as low pressure dominates.

Met Office meteorologist Aidan McGivern said: “Monday promises some drier and brighter interludes, but then we are back to where we started with low pressure to the southwest and high pressure to the east.

“On Tuesday and Wednesday, we will see some wet weather.

“After that, there are signs of high pressure becoming a bit more influential later next week.”