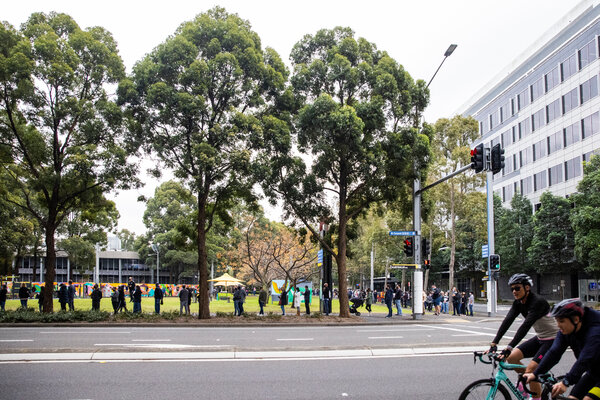 Politicians and medical experts in Australia are trading blame for a slow vaccine rollout as the country struggles to contain a coronavirus outbreak in Sydney, its biggest city.

Only about 9.5 percent of Australia’s population of 26 million has been fully vaccinated, with 27 percent of people having had at least one dose, according to New York Times data — figures that lag behind many other richer nations. The rollout of doses has been hampered by shifting advice about the AstraZeneca vaccine, the only one manufactured domestically, which the authorities currently recommend only for those over 60. People under 40 are not yet eligible to receive the Pfizer vaccine, the only alternative, because of supply shortages.

In radio interviews on Wednesday and Thursday, Prime Minister Scott Morrison blamed the sluggish rollout on Australia’s vaccine advisory body, saying its “cautious” guidance had “put us behind.”

The body, a panel of health experts known as the Australian Technical Advisory Group on Immunization, issued recommendations beginning in April that younger people should wait until the Pfizer vaccine was available, because of a very small risk of blood clots connected to the AstraZeneca shots. On Tuesday, the group revised its advice, saying that during an outbreak, when the supply of Pfizer was low, people should consider getting the AstraZeneca shots despite the rare clotting risk.

Mr. Morrison said that the group’s initial advice constrained use of the AstraZeneca vaccine, which Australia had invested in most heavily, and was based on the assumption that case numbers in the country would remain low. “I never made that assumption,” he said.

The advisory group said in response that its role was only to provide guidance and that the federal government remained responsible for decision making.

The finger-pointing was escalating as an outbreak in Sydney swelled to 900 cases, with the lockdown in the state of New South Wales, which includes the city, stretching into a third week. On Wednesday, the state’s premier, Gladys Berejiklian, said that case numbers were “stabilizing.” But officials in Australia’s second-biggest state, Victoria, which includes Melbourne, announced a five-day lockdown after a cluster of infections linked to the Sydney outbreak grew to 18 people. Three of them were suspected to have been infected at a sports event over the weekend attended by tens of thousands of people. More than 10 million in Australia are now under lockdown.

Mr. Morrison’s government has also faced criticism for being slow to procure other vaccines. Australia is set to receive 40 million Pfizer doses by the end of the year, with about three-quarters of those yet to arrive. The government announced last week that the delivery of some of the anticipated doses would be brought forward to August, from September.

Opposition politicians intensified their attacks after it was reported over the weekend that a former prime minister, Kevin Rudd, had called the chief executive of Pfizer in a personal capacity to lobby for more doses, at the request of business leaders. Mr. Morrison’s government responded by saying that it had been communicating with Pfizer’s Australia chief of operations.

Mr. Morrison has also argued that supply chain delays — such as Italy’s blocking AstraZeneca doses bound for Australia earlier this year — and vaccine misinformation spread by some lawmakers hampered the provision of vaccines.