Home » World News » Afghanistan: No child will be taken out of Kabul on their own, defence secretary says, following reports of women throwing babies over razor wire

No child will be taken out of Afghanistan on their own, the defence secretary has said, following eyewitness reports of desperate women throwing babies over razor wire at a compound and asking British soldiers to take them.

Ben Wallace told Kay Burley that when evacuating refugees from Kabul, the UK government “cannot just take a minor on their own” and that children will be helped out alongside their families.

His comments come following a conversation Sky News chief correspondent Stuart Ramsay had with a senior officer in Afghanistan, in which the official said: “It was terrible, women were throwing their babies over the razor wire, asking the soldiers to take them, some got caught in the wire.” 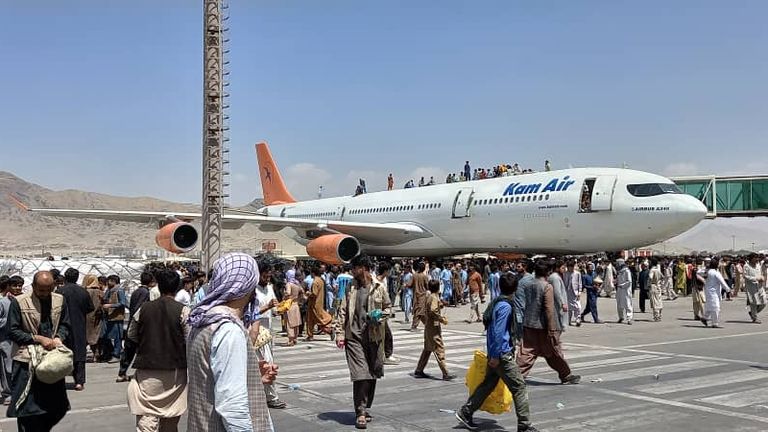 But Mr Wallace offered reassurance that the UK government is continuing to load families onto planes departing Kabul airport and will continue “rolling through that process”.

Shown video of babies being handed over razor wire on Sky News, the defence secretary said: “In the footage I have seen them. If they are families that are coming through as a whole they will come through.

“Right now as we are speaking I think we are loading up 120 families on to a plane to depart, another 138 only a few hours later – we will be rolling through that process.

“It is a 24-hour airport now for military planes and they are getting through.

“Obviously we cannot just take a minor on their own and it is difficult, but you will find, I think if you see in the footage, the child is taken – that will be because the family will be taken as well.

“It will be the challenge of trying to make it through the crowd. We are finding other ways of dealing with that, but that is what is happening.”

The defence secretary also denied reports that the UK government are allowing “empty planes” to take off from Kabul.

Labour leader Sir Keir Starmer raised the matter during the Commons debate on Afghanistan on Wednesday. 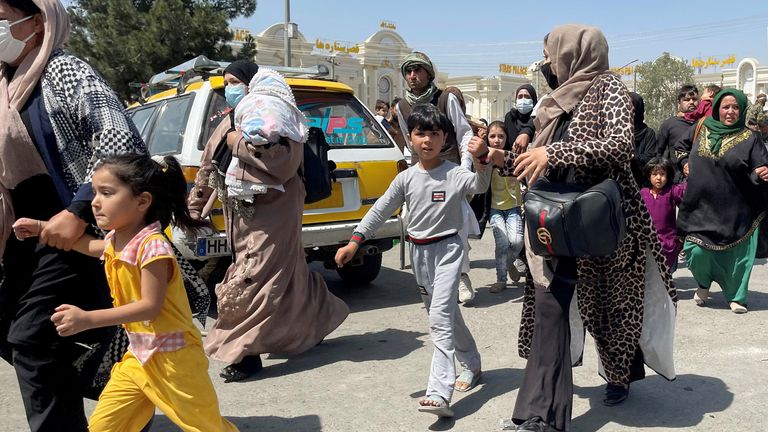 And responding on Thursday, Mr Wallace told Sky News: “The other thing is we are not sending out any empty planes. We have not sent out a single empty plane so far.

“If we have any spare capacity at any stage we make sure we share it with other nations to fly out their key personnel such as we flew out some Nato personnel and some of the Nato interpreter Afghans for them to make sure that not a single seat is wasted and we are co-ordinating with other countries.”

Thousands of civilians have descended on the airport in Kabul over the past few days in a desperate bid to leave Afghanistan following its takeover by the Taliban.

A photo showing the Afghan civilians, crouching and crammed up against each other on the floor of the military plane, went viral on social media after Kabul was seized by Taliban insurgents.

It is believed more than 600 people were crammed onto the US aircraft which later touched down safely in Qatar.

Others clung to another plane as it taxied and video footage showed at least one person falling from the aircraft during take-off.

And at least five people have been killed during chaos on the ground, with US troops firing into the air to deter people trying to force their way on to flights evacuating diplomats and embassy staff.