Home » World News » Aiming for Perfect Asian Tapas, Even in a Pandemic

A Korean Chef With a Globetrotting Palate 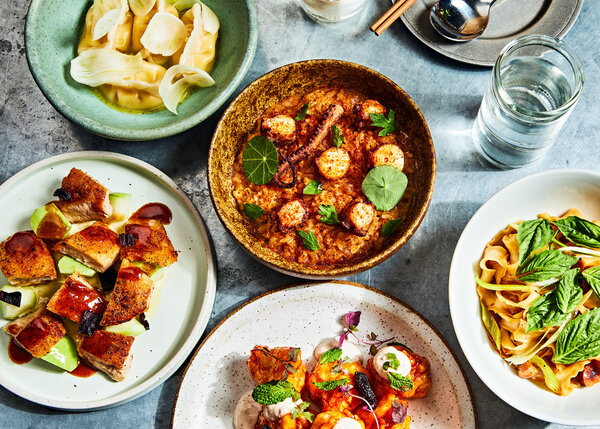 “Everything was perfect, as always,” the woman at the next table at Mokyo said as she paid the check.

I would have hedged that slightly; perfection is too much to ask of any restaurant meal, let alone one that servers in masks bring out to the sidewalk of St. Marks Place during a pandemic, while the assembled dogs, e-bike delivery drivers and nocturnal wanderers of the East Village pass by.

But I knew exactly what she was talking about. Mokyo’s chef, Kyungmin Kay Hyun, is aiming for a very high mark, and hits it far more often than anybody should under these circumstances, when restaurants have their hands full just trying to stay in business for another week.

Ms. Hyun calls her cooking at Mokyo “Asian-inspired tapas.” My past experience with stuff called Asian tapas has been grim, suggesting that whoever was in charge had never been to a tapas bar and couldn’t find Asia on a globe. Ms. Hyun’s idea of tapas isn’t very Spanish; she means the word in the modern American sense of small, composed plates. But the dishes she lobs out of the kitchen, one quickly following another, make complete sense.

The texture Ms. Hyun gets out of her Korean fried cauliflower is a marvel, almost fluffy like a baked potato, very soft but not mushy or clammy. Around this is a thin fried shell that keeps its crunch even though it’s coated in a sticky gochujang glaze.

If this were the Cheesecake Factory, the cauliflower would arrive with a dish of ranch. Because this is Mokyo, it comes drizzled with labneh that incorporates raisins. The surprise of the dish is that the affinity of cauliflower for raisins is so strong it survives the gruff embrace of gochujang.

Showing off her skill with textures again, Ms. Hyun braises thin tiles of pork jowl for hours and then lightly sears them. You eat them and you immediately think of unagi, an effect she reinforces by brushing the pork with a buttery version of kabayaki sauce, the syrup of soy and mirin that Japanese chefs brush on grilled eel. Each piece of pork is draped over a chunk of chayote, which provides much of the crisp freshness that would be supplied by cucumber if this were a sushi bar.

Ms. Hyun, known as Kay, opened Mokyo in December with her husband, Sean Hwang. It’s a block away from their first restaurant, Thursday Kitchen, and the name is a play on the Korean word for Thursday. 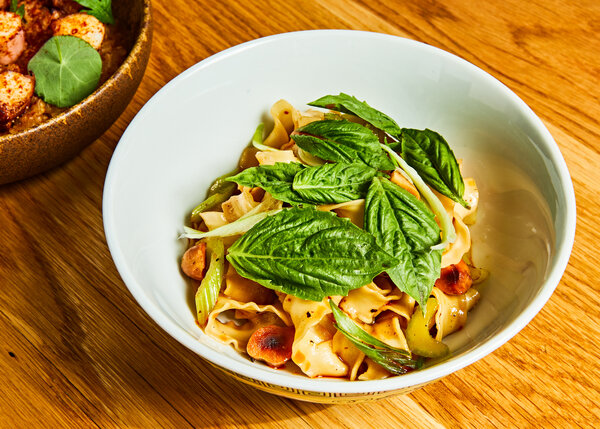 At both places, Ms. Hyun’s frequent strategy is to rewire familiar dishes; when a dish isn’t already Korean, she adds a component that is. (She comes from South Korea herself, the coastal city of Busan.) A shower of smoked pimentón over exceptionally tender octopus legs at Mokyo give the dish an obvious Spanish cast, but the mesmerizingly good rice porridge under those legs is made with the same technique a Korean cook would use to make jook.

Mokyo was meant to be a step up in refinement, but the pandemic got in the way. There’s a handsome interior of whitewashed brick, wood floors and industrial-modern chairs, only one-fourth of which can be occupied under current safety rules. At tables set on the sidewalk, and on the pavement from Thursdays to Saturdays, you can still see the servers trying to go through the motions of a somewhat formal service style, even as they are largely drowned out by all the other events on St. Marks, which during one of my meals included a small brass band playing somewhere out of sight.

Mokyo put together a brief but thoughtful list of sake and soju, but when it reopened for outdoor dining this summer it borrowed a gimmick from Thursday Kitchen: glow-in-the-dark cocktails served in plastic pouches punctured by a straw.

Over the summer, Ms. Hyun adapted some dishes to stand up to the heat outdoors. Now she is adjusting others so they will keep their heat when the air turns cold. She shortened her menu when she reopened, but she has been adding dishes back and hopes to restore its preplague length soon.

Whatever changes she has made, though, the food at Mokyo retains a level of complexity and polish that not many restaurants would bother attempting this year.

The corn dumplings are a successful repurposing of ravioli to deliver the flavors of Mexican grilled corn, in the form of a juicy, butter-laden purée of smoked corn. There is a whisper of truffle oil in the filling, and if the prospect makes you want to run for the hills, you should taste the way the tart and smoldering salsa verde keeps the truffle in its place.

There are Taiwanese flat noodles dressed with brick-red chile oil that pulses with Sichuan peppercorns. You know this combination, but not what’s coming next: the fresh, reviving, summery aroma of basil leaves and chopped, toasted Brazil nuts. From one wavy strand to the next, the dressing wobbles between dan dan noodles, spaghetti with pesto and some other, delicious thing that until now was found only in Ms. Hyun’s wonderfully busy imagination.