Home » World News » Alcohol will be banned at the Tokyo Olympics.

Organizers of the Tokyo Olympics said on Wednesday that they would ban alcohol at the Games, bowing to an outcry from a Japanese public that is deeply skeptical of hosting the event and weary of months of pandemic restrictions.

Two days earlier, the organizing committee said that it was considering sales of alcohol during the Games, which are scheduled to begin in Tokyo on July 23. That prompted outrage from many Japanese, with Tokyo and several other areas just emerging from a prolonged state of emergency during which restaurants were prohibited from selling alcohol as a virus control measure.

On Wednesday, the president of Tokyo 2020, Seiko Hashimoto, said that the committee had consulted with experts and decided to ban the sale and consumption of alcohol at Olympic venues “to prevent expansion of infection.”

Asahi Breweries, an official partner and one of the largest beer and spirits producers in Japan, endorsed the ban. “We totally understand the decision by the committee,” said Takayuki Tanaka, a company spokesman. “We will keep supporting the Games’ success.”

The alcohol ban is the latest sign that the Tokyo Games, postponed from 2020 because of the pandemic, will be unlike any other. This week, organizers said that crowds would be limited to 50 percent of a venue’s capacity, up to 10,000 people. Only spectators who live in Japan will be permitted to attend, with the organizers having decided back in March not to allow fans to travel to the Games from overseas.

Organizers are still determining what the crowd guidelines will be for some outdoor events such as marathons and whether viewing events that could attract large groups should be allowed in certain parts of the country.

After a sharp spike in May, coronavirus cases in Japan are receding, with daily totals of new cases nationwide having fallen by 38 percent over the past two weeks. A sluggish vaccination drive is starting to pick up pace, but with only 8 percent of the country fully vaccinated, according to New York Times data, the Olympic events are set to take place in front of crowds that are mostly not immunized. 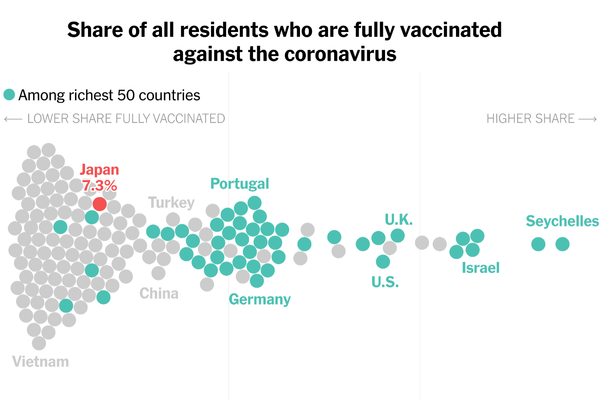 A Month Before the Olympics, How Is Japan Faring With Covid?

In the past month, cases have decreased and vaccination has ramped up dramatically — but with less than one-fifth of the country even partially vaccinated, many residents remain worried about hosting the Games.