Even if Donald Trump had not become the international poster child for COVID-19, he was always destined to loom over the vice-presidential debate, especially after his disastrous opening encounter with Joe Biden.

Now, the president’s illness – and the uncertainty shrouding the state of his health – presents Republican running mate Mike Pence with a tricky challenge. It also complicates the task of Democratic nominee Kamala Harris, leaving her with a delicate line to walk. Even in absentia, even from his sickbed, Trump commands centre stage at the vice-presidential debate.

Wednesday’s contest between Pence and Harris has the potential to shatter viewership records for vice-presidential debates, which normally draw much smaller audiences than their top-of-the-ticket counterparts – the exception was Biden’s debate against novelty act Sarah Palin in 2008.

With the question of presidential succession at the forefront of many voters’ minds, and obfuscation from the White House the order of the day, the Pence-Harris match assumes an outsized role in the relentlessly bizarre election of 2020. This is the first vice-presidential debate in American history that will also be watched as a presidential debate.

Viewers of the vice-presidential match will see two very different, very skilled debaters, separated by plexiglass, making their appeals to the nation at a strange and emotionally fragile moment. Both candidates bring strengths and liabilities that will determine how they navigate a debate that is unusually fraught for its participants.

Trump has put Pence in a bind in two key ways. First, there is the Trump administration’s negligent response to the pandemic, now personified by an ailing Trump under round-the-clock medical supervision, pretending all is well. Second, there is Trump’s aggressive, politically damaging debate performance against Biden last week, still fresh in the nation’s memory. Either one of these would be difficult to explain away, yet Pence must tackle both.

If history is a guide, Pence will deploy an evasive but upbeat tone. In his 2016 debate with Tim Kaine, Pence outmanoeuvred his rival by projecting an air of bland, cautious inoffensiveness. Even when espousing controversial views, Pence managed to sound generic and unthreatening. His rhetorical strategy has been to use a whole lot of words to say a whole lot of nothing. Virtually every statement Pence makes vanishes into thin air before he reaches the end of the sentence.

In debates, this can be a useful tactic. Running out the clock is a skill Pence mastered as a feel-good talk radio host in the 1990s, and it’s a trick he regularly employs with journalists. 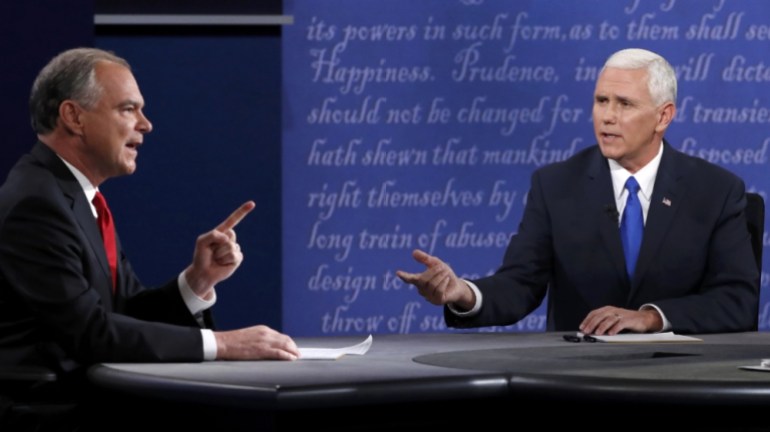 Democratic US vice presidential nominee Tim Kaine (L) and Republican vice presidential nominee Mike Pence  during their debate at Longwood University in Farmville, Virginia, October 4, 2016. [File: Jonathan Ernst/Reuters]But in Kamala Harris, Pence is up against a much tougher adversary than Tim Kaine. This time, warm smiles and down-home Midwestern chitchat won’t suffice. By universal acclamation, Pence won the 2016 vice-presidential debate, but concealed behind that victory was an inability to mount an effective defence of Donald Trump. Four years later, the administration’s record leaves Pence even more vulnerable to a sharp opponent.

Let us not forget that like all politicians, the vice president has ambitions of his own that transcend his alliance with Trump. Under normal circumstances, a high-profile debate like this would allow Pence to position himself as heir presumptive to the Republican throne. Now, instead of making a positive case for his own political viability, Mike Pence must spend the 90-minute encounter defending the indefensible.

With Pence relegated to defence, his opponent will need to play offence in a way that appropriately reflects the sensitivities of the moment. Obviously, Harris will criticise the Trump administration, but she may choose to soften how she talks about Trump himself. Striking the balance between sympathy and indignation is the sweet spot Harris must hit.

The campaign gods have dealt Harris a strong hand going into this debate, including one particularly valuable card: Pence’s status as head of the White House coronavirus task force. This provides Harris with a way into the issue that avoids Trump’s personal health and keeps the emphasis, by proxy, on Pence. It’s a simple question: With Pence in charge these past seven months, how did things go so wrong?

Harris’s debate style is often described as “prosecutorial”, as befits someone with a long career as a local district attorney and state attorney general. The intensity she projects is leavened by a steady, consistent unflappability – Harris never seems to lose her California cool, even when bearing down on an opponent or fending off an attack.

Unlike Mike Pence, Harris has never participated in a general election debate, and her comparative lack of national political experience is likely to show. In the 2020 Democratic primaries, Harris took part in only five multi-candidate debates before exiting the race, though her previous debate experience does include a number of Senate and attorney general matches in California.

Harris’s high point in the Democratic primary debates came at the expense of running mate Biden, when she criticised him for having once opposed busing as a means of integrating public schools. “There was a little girl in California who was part of the second class to integrate her public schools and she was bused to school every day,” Harris told the audience, then turned directly to Biden. “And that little girl was me.” 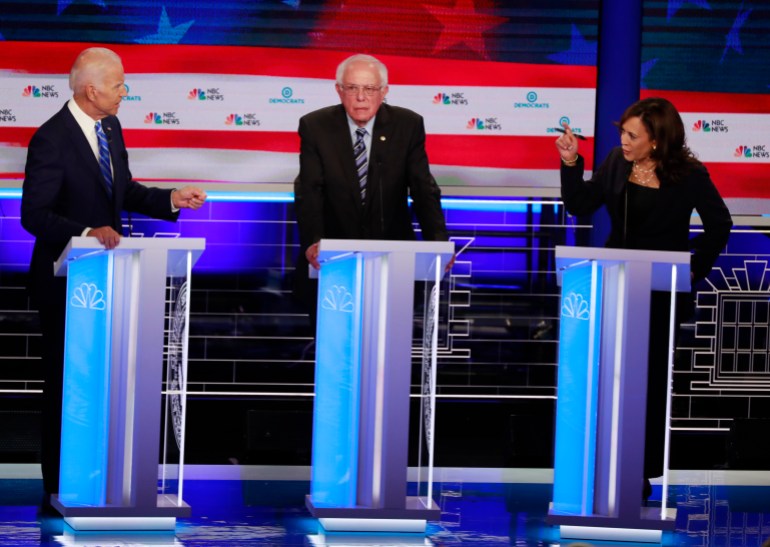 Joe Biden, left, and Kamala Harris, right, spar during a Democratic primary debate, June 27, 2019, in Miami, Florida. Senator Bernie Sanders is in the centre [File: Wilfredo Lee/AP Photo]“That little girl was me” instantly exploded into a meme, netting $2 million in donations to Harris’s campaign within 24 hours. In a field of more than 20 Democratic contenders, Harris vaulted into the top tier of potential presidential nominees.

Success on the debate stage proved elusive for Harris after that. Perhaps a better forum for displaying her verbal dexterity and dramatic flair has been the floor of the United States Senate, where Harris has used her membership on the powerful Judiciary Committee to publicly discombobulate two Trump attorneys general (Jeff Sessions and William Barr) and a Supreme Court nominee (Brett Kavanaugh). Harris seems to hold particular peril for conservative white Republican males – a category that naturally includes Pence.

Heading into the vice-presidential debate, political circumstances may favour Harris, but as we learned in 2016, Pence cannot be discounted, especially with his back against the wall. At an unsettling juncture in American history, this normally low-stakes ritual suddenly feels like an audition for destiny.