One of the two attackers likely the Indonesian wife of first Filipino suicide bomber, killed in 2019. 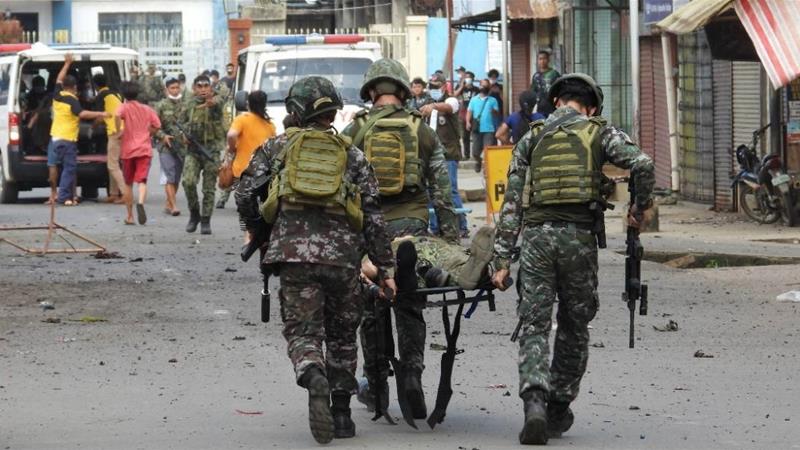 Two female suicide bombers, one of them Indonesian, were behind Monday’s twin attacks in the southern Philippine town of Jolo, the country’s army commander said, as government soldiers in the area were placed on “high alert”.

At least 14 people, including troops and civilians, were killed in the attacks, which also wounded 75 others in the capital of Sulu, one of the country’s southernmost provinces which is known as a stronghold of the armed Abu Sayyaf Group.

Lieutenant General Cirilito Sobejana, commanding general of the Philippine army, told ABS-CBN digital news that one of the attackers was probably the Indonesian wife of the first-ever Filipino suicide bomber, who blew himself up outside a military camp in Indanan town, also in Sulu, in 2019.

Sulu is one of a chain of mainly Muslim islands in the southwest of the majority Roman Catholic country.

Sobejana said investigators had collected the remains of the suspects for forensic tests, to determine who the Indonesian national was, and who carried out which attack.

There have also been reports that one of the attackers was the daughter of the Indonesia couple who was behind the suicide bombing at the Catholic church in Jolo in January 2019 – an incident in which more than 20 people were killed.

Monday’s two incidents, not far from the church, were one of at least six suicide bombings in the past three years, a mode of attack previously rare in the Philippines.

Initial reports said a motorcycle packed with improvised explosives was used for the first bombing, but it now appears that a female bomber was also involved.

As authorities cordoned off the site of the first blast, it is thought a second woman blew herself up causing more deaths and damage.

There was no immediate claim of responsibility for the attacks.

Sobejana also said the two female suicide bombers were probably the same suspects who were being tracked by four military intelligence officers. The four officers were killed in a confrontation with Jolo police officers in June.

During a Senate hearing in Manila on Monday, shortly before the attacks in Jolo, Major General Corleto Vinluan, a military commander in Mindanao, also said it was “possible” the police officers involved in the shooting of the army officers were related to members of the Abu Sayyaf.

“That is possible, because almost everyone are related to each other in Sulu. There are ASG [Abu Sayyaf Group] who have relatives in the police force … Sulu is small.”

In a separate statement obtained by Al Jazeera, Major General Edgard Arevalo, the Armed Forces of the Philippines spokesman, said the military was “on high alert following this incident”.

“We advise the public to stay calm, but be vigilant to monitor and report any suspicious persons or items or unusual activities in the area.”

Abu Sayyaf has long been battling for independence in the southern region of Mindanao, which they regard as their ancestral homeland dating back to the pre-Spanish colonial period.

The group is notorious for kidnappings, robberies and deadly bombings. It has also allied itself with the ISIL (ISIS) armed group.

Susukan’s presence in Davao had raised concerns about security in Mindanao. For years, Susukan has been wanted on multiple murder charges in the country’s restive south.