BBC Weather forecaster Sarah Keith-Lucas warned more thunderstorms with hail and lightning will be seen in the southern parts of the country today. As temperatures will continue to gradually plummet, Britons will see highs of 25C in the south and 15C in the north, down from the scorching 35C of the beginning of the week. The weather forecaster said: “Through today, high pressure toppling across the northern quarter of the UK keeping things largely dry.

“Low pressure in the south is going to be spilling those heavy showers and thunderstorms that we’ve seen.

“They’re going to be quite hit and miss today across southern England and South Wales and some places are yet to see any rain.

“They will be hit and miss again but where you do see them, they’ll be quite heavy with some hail and certainly with some frequent lightning as well. 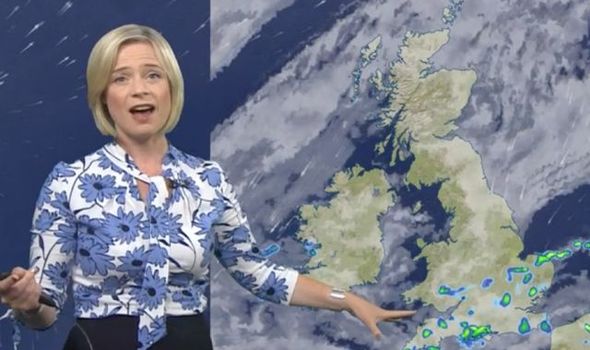 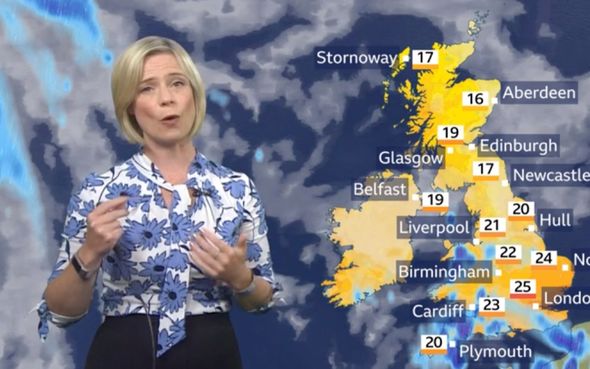 Heatwave conditions have shrouded the country in an intense haze for the last week, causing the mercury to shoot into the mid-30C range and above.

Although many will have hailed the return of a long-term sunny spell, it came with uncomfortable high humidity and still air.

Thunderstorms will have cleared humidity from many regions around the UK, but the question remains as to whether the conditions will return.

Forecasts predict the mercury will continue to decline over the next few days, with maximums of 23C by next Monday.

Met Office forecasters have storm warnings in place from now until then, with rain, hail and bluster descending over most of the south.

But the sudden change in weather will only last so long, as long-range forecasts from the agency believe the warm weather will make a comeback.

In their latest long-range prediction for the UK, which covers August 18 to 27, they signalled the return of “rather warm” temperatures.

They added only a “slight” cooling could come by the end of the period.

The Met Office said: “The beginning of this period is likely to be generally unsettled, with showers and longer spells of rain at times.

“There is also a low chance that there could be some further thundery weather, although this would most likely be confined towards the southeast of the UK. 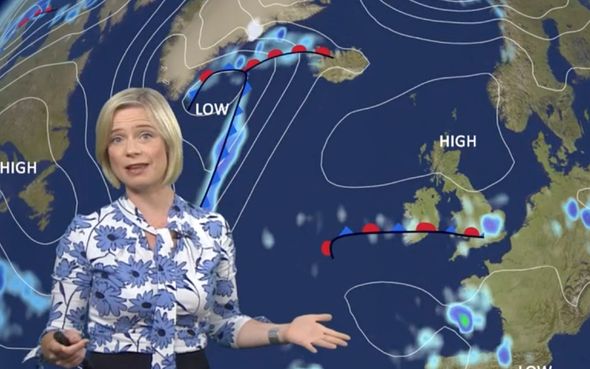 “It is likely to be windier than of late, especially in the west where there is also a risk of gales.

“Temperatures should start rather warm for many, despite the spells of unsettled weather.”

“However, temperatures may cool slightly by the end of this period as the low-pressure system, which was situated over the west of the UK, pushes towards the east and allows for a freshening breeze to develop from the northwest.”

A second Met Office forecast, which covers August 28 to September 11 this year, expanded on how the weather would change come next month.

They said chances of “very warm” temperatures will continue, but the distant period the secondary forecast covers offers less certainty.

The next forecast reads: “Although confidence is low for this period, it is likely that conditions will become more changeable with settled days interspersed with periods of rain and strengthening winds, especially in the northwest.”