BBC meteorologist Matt Taylor warned unsettled weather will be plaguing the UK for most of the weekend as persistent showers and heavy rain continue to barrel into the country. Mr Taylor noted temperatures will be lower compared to earlier in the week, with coastal areas along the North Sea taking the brunt of the change. The forecaster said: “Plenty of cloud across eastern areas. Best of any sunshine in the west but, as we see temperatures rise in those sunny conditions, showers get going again.

“Parts of southwest England, Wales towards Northern Ireland are those prone to the heaviest of those showers. Here we can see temperatures of 15C, maybe 16C in the sunnier moments.

“A lot more cloud further east and cool down the North Sea coast, only around 9C. A big change on what some of you saw yesterday.

“As we’re going through this evening and overnight, we’ll still see more showers dotted around, and then an area of more persistent rain arise into Wales and southwest England and pushing into other parts of southern England.

“Not quite as heavy as the rain we saw through yesterday but still unwelcome.” 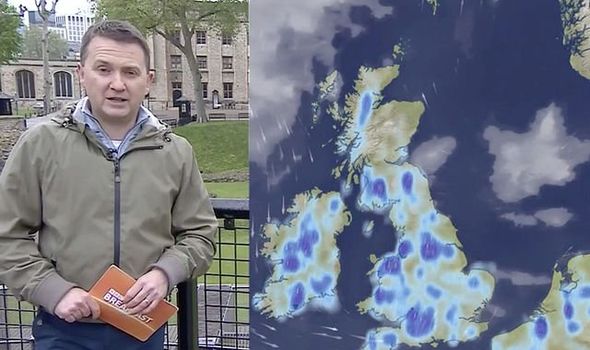 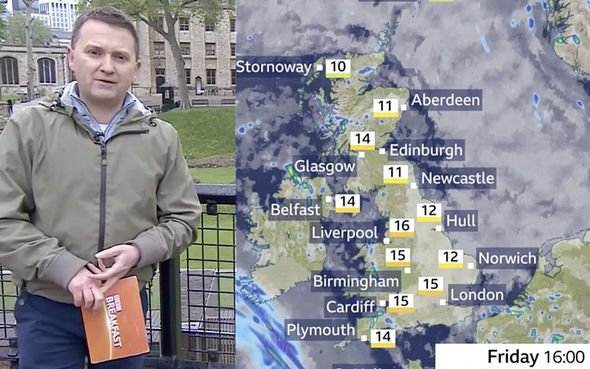 The BBC Weather forecaster continued: “Without added cloud around, means it’s not going to be a particularly cold night tonight – temperatures staying above frost levels for all parts of the UK.

“Going into the weekend on a fairly cloudy note, there’ll be some spots of rain, a drizzle of rain for the northern half of the country but wettest conditions begin with Wales, Midlands, southern England.

“Rain eases off temporarily, the sunshine comes out and then some heavy and thundery showers head through Wales, Midlands, southern England most prone to those.

“Further north fewer showers around. Into Sunday it’s more of a case of back to square one.”

The unsettled weather set to blight the UK this week is the result of a broad area of low pressure currently stuck over the country and most of the continent.

Low pressure is expected to remain in charge for most of May keeping temperatures cooler and generating unsettled weather.

Persistent afternoon showers will be intermixed with some sunshine, with the potential of warmer southerly winds developing as we head into June. 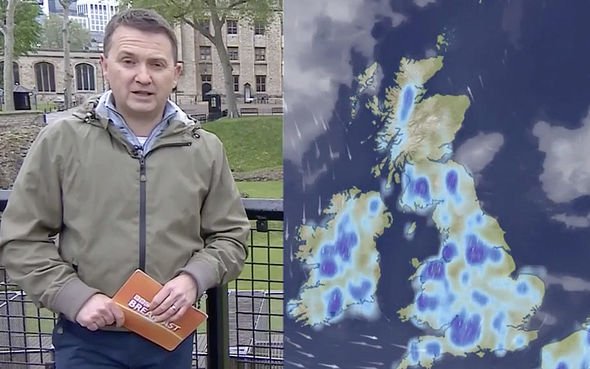 BBC Weather’s long-range forecast for the final week of May read: “Low pressure will remain in place and keep things unsettled and showery for the UK.

“In addition, the jet stream, a ribbon of fast-moving air in the upper atmosphere that drives weather systems, will be displaced slightly to the south of us.

“This is the main reason for the below-average temperatures, as cooler air that is normally near Iceland is now over us instead.

“Around the middle of next week, there is potential for a deeper low-pressure system to send some weather fronts into the UK from the west.”