BBC weather forecaster Carol Kirkwood said the UK “is not going to see any rain in the next five days” as a new heatwave is expected to develop across the UK, especially in southeast areas of the country. As we head into Tuesday and Wednesday, Ms Kirkwood forecast a weather front coming from the west will introduce “some ticker clouds” resulting in a temperature rise across the whole country that could leave areas experiencing 36C degrees.

Ms Kirkwood said: “This morning is quite a mild start to the day, but as we go through the next few days we are looking at a heatwave developing especially across England and Wales but there’s potential too for southern parts of Scotland and southern parts of Northern Ireland.

“High pressure is firmly in charge of our weather for the next few days and also nights, and eventually as we head towards the end of the week we start to draw in more of a southeasterly wind and that is going to pull in the warmer air from the new continent.

“A weather front coming from the far north of Scotland and the west will introduce rain at times.

“It has been very dry during July and the early parts of August but we desperately need that rain, we’re not really seeing it in the next five days at all.” 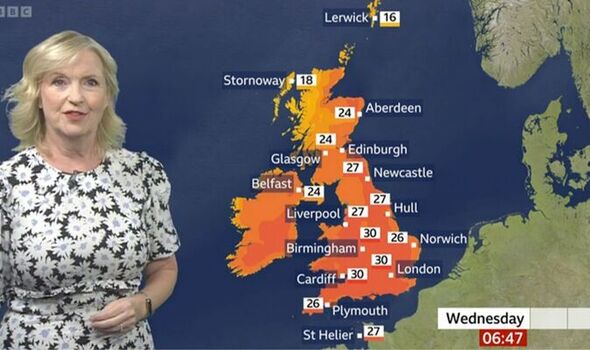 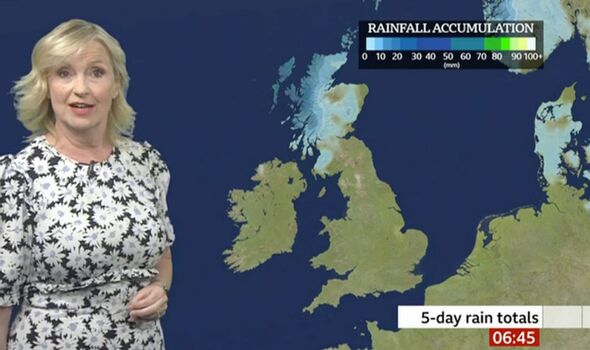 “A little bit of mist first thing this morning which will lift rapidly, a lot of dry weather and sunshine.

“The weather front in the northwest introducing thicker cloud and rain, which will be heavy at times, and here as well it will be breezy.

“Shrouding the coastal hills, you will have a low cloud and misty conditions with temperates up to 29C or 30C degrees in the south-east.”

Referring to this evening and overnight, she said: “Clear skies, it will be patchy mist forming in parts of England, Wales and Northern Ireland, we could see some in Scotland.

“We have a weather front producing some spots of rain here, the wind will waste for a time, and then it will pick up again across the far north and west.”

As we move into tomorrow morning, she forecasted: “Mist that formed overnight will disperse and once again dry and sunny conditions.

“Dry across north-west Scotland, away from the Northern Isles, but later rain returning here.

“Gusty winds as well, 40 or 45 miles an hour with temperatures possibly hitting 31C degrees in part of Southern England.” 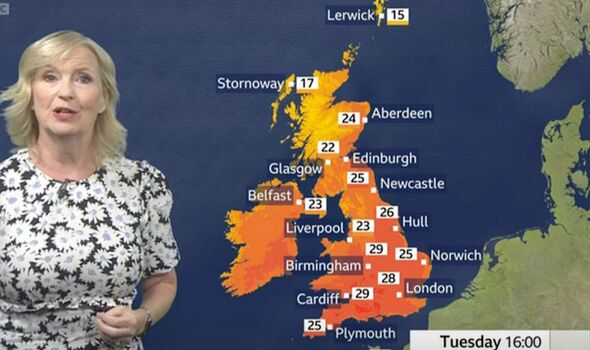 Into Wednesday, she said: “Still a lot of dry weather around.

“Cloud in the north-west, here as well it is going to be pretty breezy, but later on we will see this weather front introducing thicker cloud with temperatures rising to 30C and 31C degrees as we push into southern England and south Wales.