The BBC Weather meteorologist predicted increasing amounts of sunshine as the temperatures begin to rise this weekend towards the high 30s this weekend. Temperatures have been predicted to reach a range between 30 to 40 degrees across the country, and there may be a new record in the UK. Matt Taylor warned Britons that the extreme heat could impact health and travel.

Mr Taylor said: “That creep up in temperatures continues into Sunday we’ll see some overnight showers.

“One or two across northern parts of the UK to begin with.

“They will ease away into the afternoon, increasing amounts of sunshine.

“By this stage, temperatures starting to get back up around 30 degrees.

JUST IN: ‘Desperate’ Putin authorises over 100 new laws in a day including Hitler-esque youth group 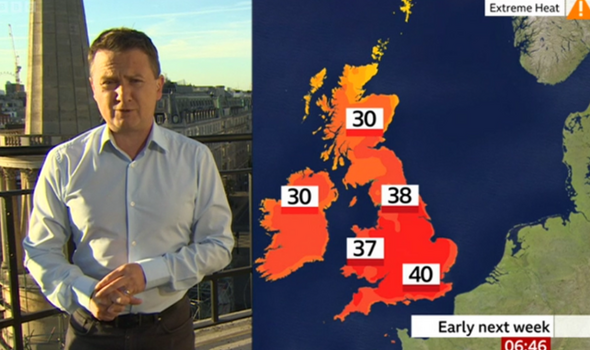 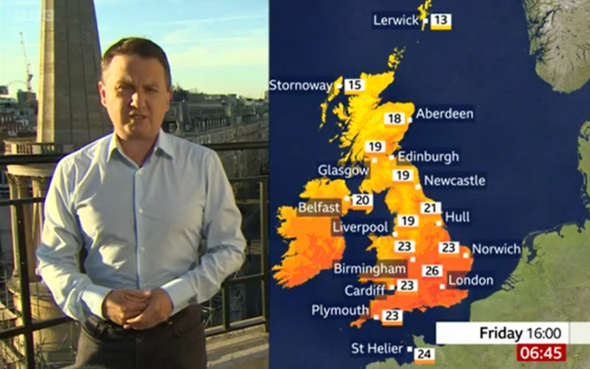 Mr Taylor added: “All parts of the country starting to feel warmer, and that’s just the start.

“As we go through Sunday and into the start of next week.

“We’re expecting to see exceptional heat build across the country.

“It looks like not only are we going to break the record for the temperature set here in the UK.

Mr Taylor said: “But look at that probably the first 40-degree day, we’ve ever seen here in the UK.

“This is significant, this is a situation that could have massive impacts to health and to travel as well.

“And also to potential power as we go into the start of next week.

“Much like you would do with a big storm system coming our way. 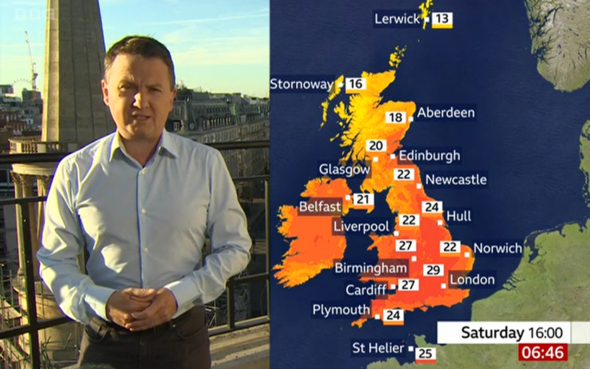 Mr Taylor added: “It’s probably best to make some plans now because there will be some impacts next week and health could be a major one.

“Not only will we see those temperatures at record-breaking levels by day.

“But there is a potential to see some record nighttime temperatures with some not dropping much bellow around 24 or 25 degrees.

The Met Office has issued an amber alert for the weather in the UK due to the ongoing heatwave.