BBC Weather: UK sweltering as mercury soars for the weekend

Scorching sunshine is set to bring a sweltering end to the week as temperatures across the country rise towards 30 degrees celsius.The working week will begin with significant cloud cover and some areas of light rain, particularly in north and western areas of the UK. As the cloud steadily moves southwards, the drizzle will clear and strong, settled sunshine will begin to dominate conditions for the remainder of the week. Speaking on BBC Breakfast, weather presenter Carol Kirkwood said: “For many of us, we are looking at sunny spells and fewer showers than we saw over the weekend.”

The weather report began by outlining a reserved start to the week with warm temperatures but a light breeze present, making the day feel much cooler.

“As we head on through the evening and overnight, there will be some clear skies for a time and then we’ve got all this cloud romping in across Northern Ireland, north west England and Wales – it’s thick enough for some rain and some drizzle.

“So tomorrow, we’ve still got this cloud with the rain, fairly light and patchy it has to be said, it’s moving southwards and eastwards.

“Across parts of Scotland and north east England, we will see some sunshine before more rain arrives.” 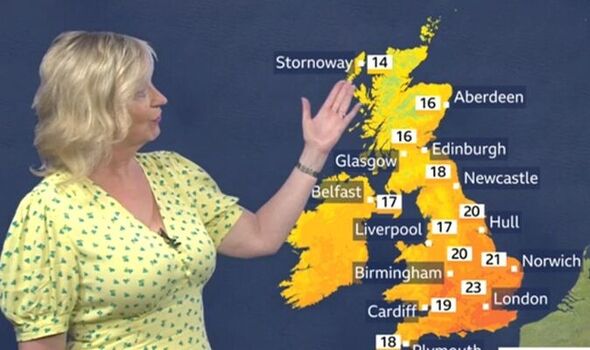 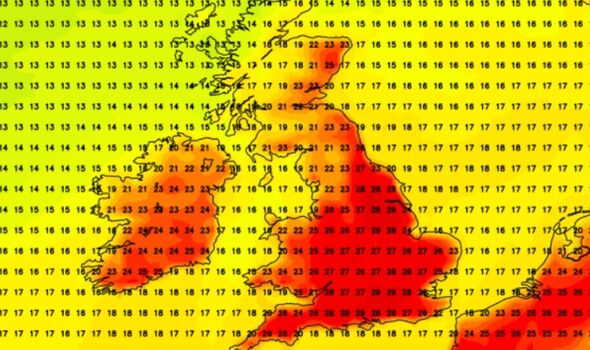 The weather presenter gave more favourable predictions for the end of the working week as she explained the cloud would pass and temperatures would rocket in time for the weekend.

Ms Kirkwood said: “If you like your weather that bit warmer, it looks like that’s going to happen this week.

“Particularly towards the end of the week, we will all be a bit warmer.

“The highest temperatures will be in the south east, where we have highs up into the high twenties.” 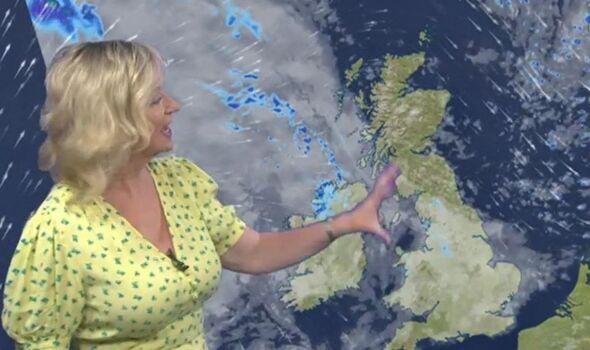 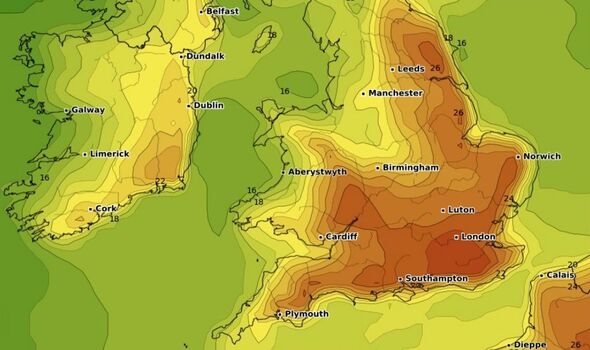 Temperatures in the south east are expected to reach up to 29 degrees celsius, with the majority of the UK set to experience a much warmer weekend.

Fellow weather presenter Elizabeth Rizzini in a later report added: “With high pressure building in from the south west as we head towards the rest of the week and firmly establishing itself, it does look like it will be dry and settled.

“Temperatures will climb again towards the end of the working week, up to the high twenties in celsius.” 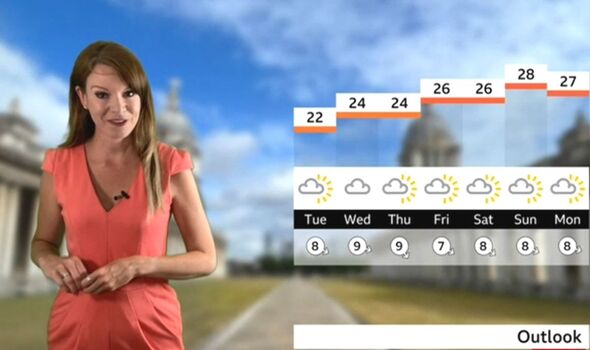 The sunshine will follow a period of drizzly, unsettled conditions across much of the UK, offering a glimpse of the summer ahead.

Looking forward to the beginning of next week, the Met Office has suggested the sunshine will remain long past this weekend, with particularly warm weather expected for the south of the nation.

While the long range report did highlight a risk of “changeable weather”, the Met Office confirmed that the area of high pressure which prompted warmer conditions will build over the week.

READ NEXT:
Brain tumour survivor explains lasting struggle with the hot weather
Key times you should NOT cut your grass – prevent ‘serious’ lawn harm
The phenomenon known to cause vision loss in hot weather
Cat warning: Urgent suncream alert issued as Britain set to bake
Brits to bask in weekend sunshine relief after days of thunderstorms