BBC Weather forecaster Darren Bett said western Europe will experience some hot weather over the coming days. From Spain to central Europe, temperatures will largely be around 25C and could get as high as 34C in some other areas. In eastern Europe however, they will see some spots of rain and cooler temperatures. The BBC showed the extent of the hot weather with an image showing Madrid and Bordeaux reaching 34C.

Mr Bett said: “We are seeing some big temperature differences across Europe at the moment.

“It is a little cooler than normal for some eastern and southeastern parts of the continent for the time of year.

“Out towards the west, with high-pressure building, the heat is going to be building.

“This band of cloud in central Europe will head down to eastern Europe and bring with it rain and drag in some cooler air. 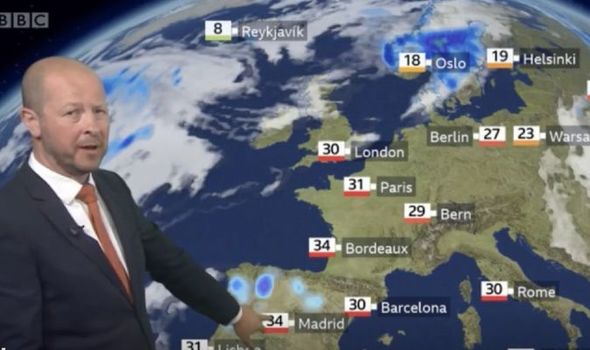 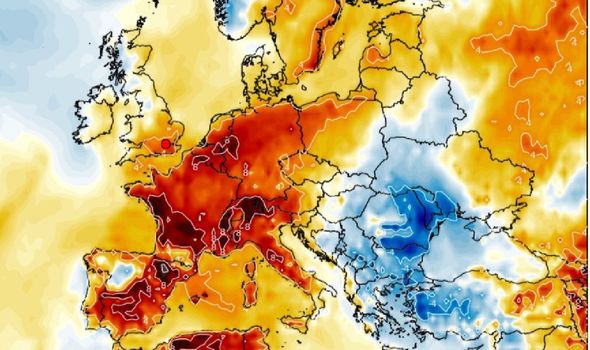 “We have got some sunshine in the west mind you.”

The BBC Weather forecaster went into greater detail of the wet weather some countries in southeastern Europe can expect.

He said: “Still largely dry on the eastern side of the Med.

“Some sunshine and the odd shower, not normally as warm as it is for the time of year. 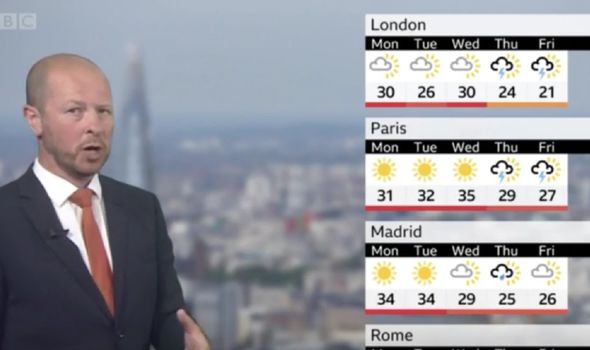 BBC Weather: Highs of 25 degrees forecast for parts of UK

“We are going to find a spell of wet weather pushing its way across Romania and perhaps into northern parts of Greece.

“There will also be some storms kicking off in the north of Portugal as well.”

The BBC weather forecaster reiterated the extent of the heat in western Europe.

Mr Bett noted that it would likely continue into the new week.

He said: “The heat is building its way northwards and going into parts of France and England.

“We have also got temperatures at 30C in London for the first time this year.

“It has cooled off a bit in Scandinavia and we are going to find the weather systems coming in from the Atlantic bringing more rain.