A wet and gusty weather front will dominate the picture on Thursday, particularly for the south-west of England and Wales as gales of up to 42mph. BBC Weather forecaster Sarah Keith-Lucas warned heavy thunderstorms will continue throughout the day for those parts of the country, slowly moving eastwards. She said: “It’s going to be a day of some heavy showers and some thunderstorms around but equally, a little bit of brighter and drier weather between those showers.

“But low pressure very much still with us, it brought the rain yesterday and the same area of low pressure bringing us more weather fronts and more heavy downpours at times during the course of today.

“So we start the morning with a bit of patchy rain across southern Scotland, Northern Ireland, north-east England.

“So rumbles of thunder and some strong gusty winds across parts of southern England and South Wales too. 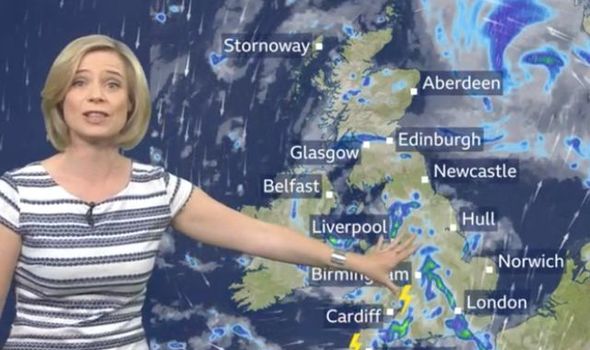 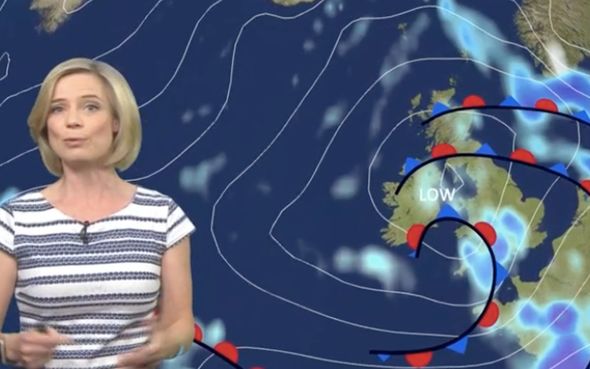 April has been a scorcher so far, but this week temperatures have dipped and rain has made its way across the country.

Heavy rain, mist, low cloud and even thunder are forecast for the rest of this week, with a dreary start to May on the cards.

Temperatures have tumbled by more than 10C in some areas, a drastic difference from the highs of 25C seen recently.

April has been so warm, the month is provisionally the sunniest on record for the UK, with 215.8 hours of sunshine recorded, 46 percent above the average for April.

Brian Gaze, of The Weather Outlook, said: “April is going from awesome to awful, with a wet end to the month and start to May.”

The Met Office forecasts bands of rain across much of England and Wales this week, with heavy bursts in the south heaving northeastwards on Wednesday.

Some sunny patches are forecast for Thursday, but elsewhere showers with heavy thunder are likely.

On Saturday, again long spells of rain are forecast for parts of the UK, but temperatures are predicted to warm up slightly in the south on Saturday. 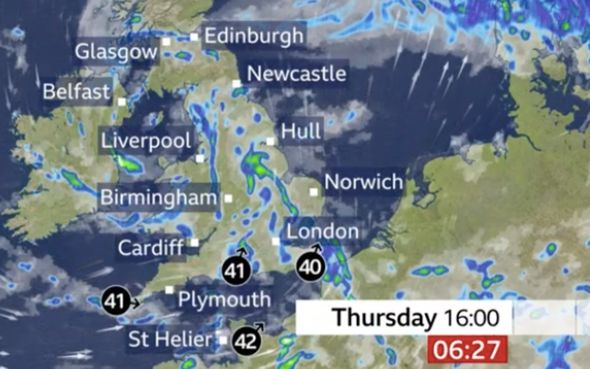 Forecaster Marco Petagna said colder days are ahead, especially in the south.

He said: “In central and southern England, tomorrow will be a cloudy, wet day, with showers getting quite heavy at times. It’ll be pretty chilly too.

“Some areas will struggle to get above 8C. These areas will have been more than 10C higher in the past few days, so it’s a big change.”

However, all is not lost as Mr Petagna said drier and warmer weather could be on the way on Friday.

He said: “It’ll possibly be drier on Friday.

“Into the weekend, temperatures could pick up to the high teens again.”