BBC Breakfast’s Carole Kirkwood said scattered showers will continue for much of the UK but more sunny spells are arriving for the UK as we carry on through the week. Mid week will see temperatures remain in the mid-teens but Friday will see temperatures soar to 20 degrees in parts of the south. May has been one of the wettest months on record for many Brits. With Wales recording its wettest May since records began 159 years ago in 1862. Bala in North Wales has had an astonishing 310% of the May average rainfall which is more than three times the usual rain for May.

Kirkwood said: “What we have today – sunny spells, some scattered heavy showers, some of those will be thundery with hail but they won’t be as frequent as they were yesterday (Monday).

“Cloudy start to the day, the cloud will thin and break, we will see some sunny spells develop and then some showers develop.”

The weather presenter added how some of those showers will be “heavy and thundery” with some hail through parts of Scotland and northern and eastern areas of England.

But she said: “For Northern Ireland, much of Wales, much of the Midlands and into the South East might catch the odd shower but generally speaking it will be dry with some sunshine and the same can be said across North East Scotland.” 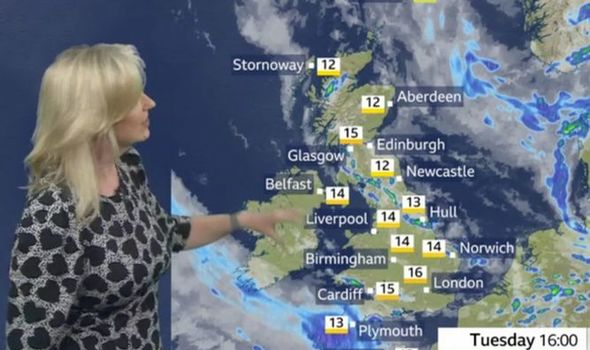 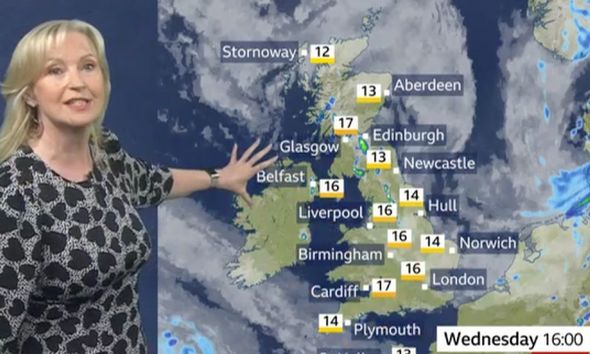 She added “temperatures still a bit below average for this time of year”.

Tuesday will see highs of 16 degrees in London, 15 in Edinburgh, 14 in Birmingham, 13 in Plymouth and 12 in Aberdeen.

Through Tuesday evening and overnight we also lose the rain from the south west.

Ms Kirkwood said: “It is not going to be a particularly cold night, we should not have any issues with frost.” 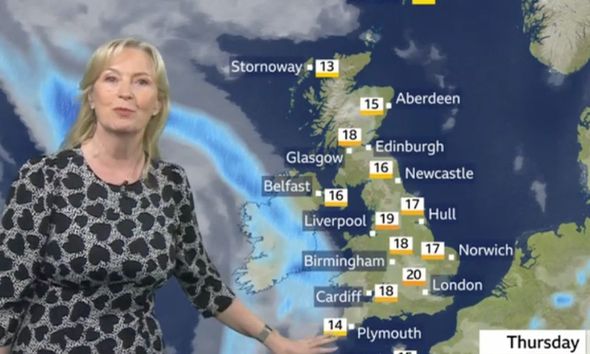 Wednesday will see “a lot of dry weather out towards the south and the west and a fair bit of sunshine” with “more cloud on Wednesday across the far north east of Scotland”.

But she said: “Temperatures are slowly starting to climb.”

Moving into Thursday the country will “see a ridge of high pressure as things settle down.” 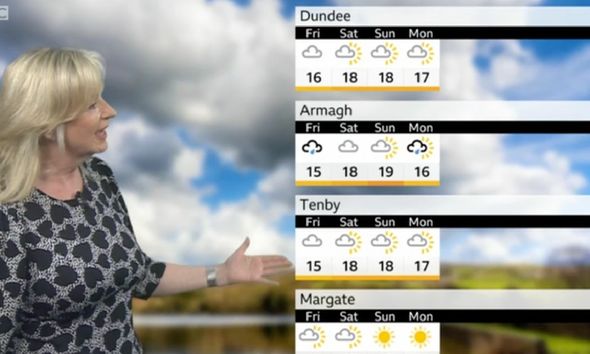 And temperatures will soar to 20 degrees in London, 19 in Liverpool, 18 in Edinburgh, 18 Birmingham and 17 in Hull.

Looking ahead to Friday, Kirkwood said: “High pressure still very much with us and it will remain with us as we head through the weekend as well” adding this will keep the weather “fairly settled.”

But she warned of a weather front arriving on Monday which could see more rain arrive for the UK after one of the wettest May’s on record.