Home » World News » BBC Weather: Temperatures to ‘fall away’ as wall of rain to hit UK with persistent showers

The BBC Weather meteorologist said conditions will remain stable through Monday, with a bright start for many but some areas experiencing low cloud and some rain. Temperatures will slowly start to “fall away” as low-pressure comes in overnight. Carol Kirkwood said: “A wet start across parts of Scotland, Northern Ireland, northern England and north Wales.

“A cold and frosty start as we push further south but here there will be some sunshine, fair amounts of cloud. At the moment in Bournemouth is -4C whereas in Edinburgh it’s plus 7C.

“We’re looking at some sunshine developing as this rain slips further south through the course of the day. A fair bit of sunshine in south Wales, and southwest England although temperatures range roughly 8 to 10 degrees.

“Through this evening and overnight, there’s a weak front travelling a bit further east and we’ve got the next one coming in from the Atlantic. In between, there’ll be a fair bit of cloud, clear skies once again in southern areas. Means temperatures will fall away.”

Ms Kirkwood continued: “In rural areas, it will be below freezing and there will be some frost around as well. As we head on into Tuesday, there’s our first weak front moving not very quickly and then we’ve also got this next area of low pressure starting to show its hand coming in from the Atlantic. 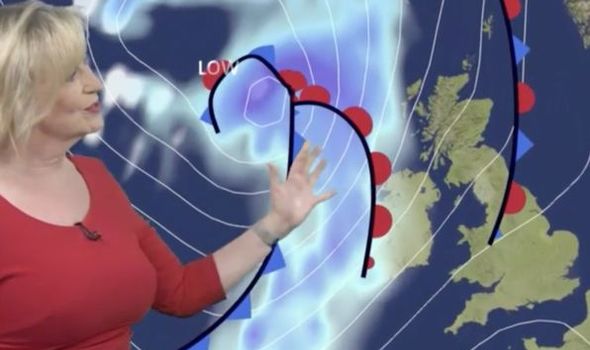 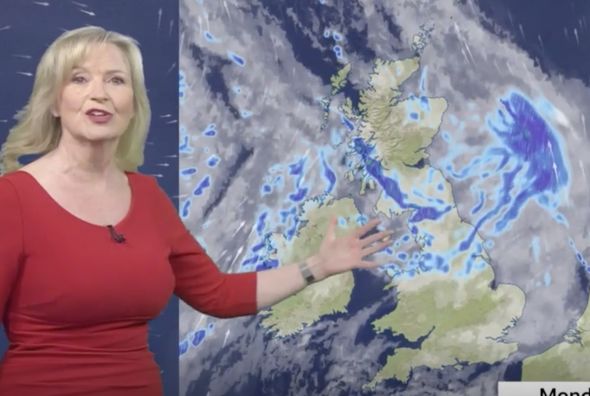 “We’ve got our first weak front producing some patchy rain, that will tend to fizzle. Some dry weather, there will be some sunshine, some brightness and then the low-pressure starts to show it’s hand later in the day, bringing in more persistent rain and also stronger winds.

“But if you’re in the dry conditions, then some sunshine, temperatures getting up between 10C and 12C.

“As we head into Wednesday, we do have a strong jetstream and the undulations of the jetstream is where we trap areas of low pressure.”

Weather models show powerful winds from the Atlantic gathering strength to hit speeds of 120km/h on Wednesday as they crash into the UK.

BBC Weather: Temperatures to fall below freezing in parts of UK 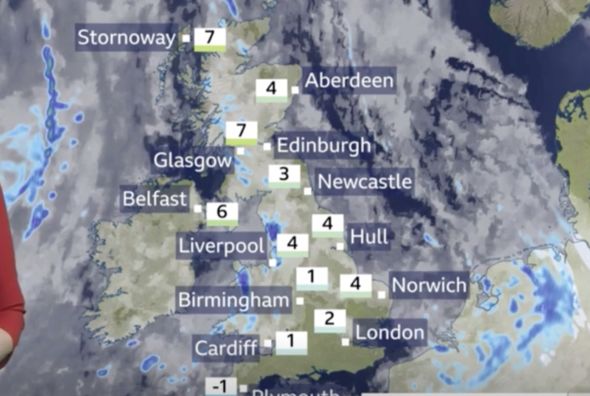 Western coastal regions stand to fare worse from the onslaught although gusts will widely reach gale-force through the middle of the week.

While the main threat will be from violent winds, parts of the country are also braced for torrential downpours as the weather turns autumnal. 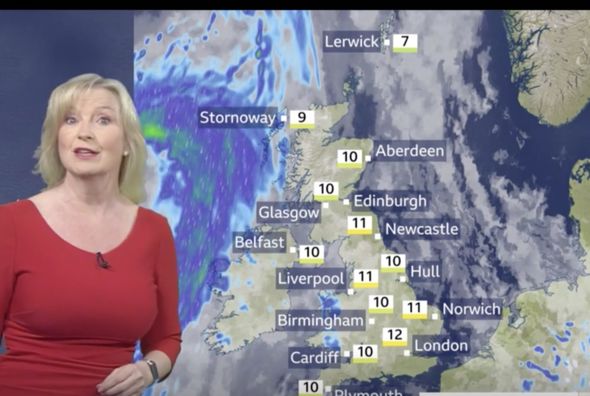 The Environment Agency (EA) has issued 19 flood alerts and one more serious flood warning across southern and parts of eastern Britain.

Officials have warned to be on alert for flooding from rivers with travel disruption and damage to properties possible.

An EA spokesman said: “Local flooding is possible from rivers and surface water, in parts of Wales and the north of England on Wednesday and Thursday.

“Land, roads and some properties may flood and there may be travel disruption.”