Home » World News » BBC Weather: UK on track to be hotter than Barcelona as temperatures rise after icy blast

BBC Weather’s Carol Kirkwood noted temperatures will continue to rise through the week but rain and strong winds will continue to plague the UK. The progressive increase is expected to leave the UK experiencing temperatures of up to 17C by the time the weekend comes around, higher than the forecast 16C for Barcelona, Spain. A cloudy start for many across the UK on Monday, quite a bit of mist and fog for southern Scotland, England and Wales.

Ms Kirkwood said: “This week will be much milder. At the moment, widely temperatures are between 4C and 7C, in the east they are a little bit lower at 2C to 3C.

“We’re going to be largely frost-free this week. There will be rain at times and often, it’s going to be windy.

“But today not as windy as yesterday as you can see from the spacing in the isobars. We’ve got a weather front in the southeast that will produce some rain and some drizzle and we’re going to have showers coming in across Ireland moving northeastward through the day.

“The very fact we’ve got all this yellow across the map of the UK shows it’s going to be a mild day. Last week, we were absolutely covered in the blue, indicating cold air.” 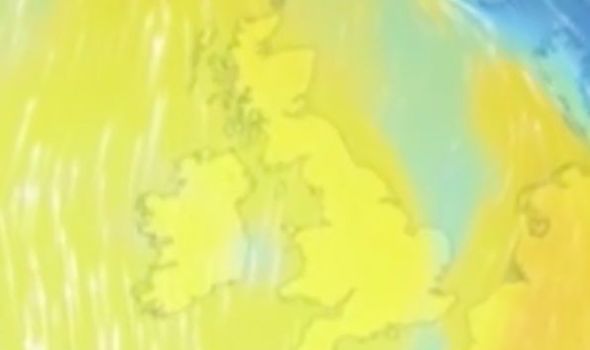 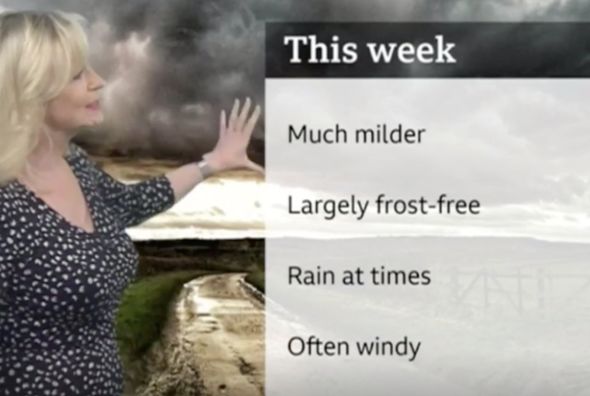 The BBC Weather forecaster continued: “A lot of low cloud, some mist and fog across southern Scotland, England and Wales – that will gradually lift.

“The rain eventually eases away and it will brighten up but we will have showers coming in across Northern Ireland, northwest Wales, northern England and Scotland.

“Temperatures today between 7C and 14C. Through this evening and overnight, we’ll start off on a dry note, the wind will strengthen, rain coming up from the south and in from the west.

“By the end of the night, we’ll have gusts of 55mph around the outer Hebrides. Temperatures between 6C and 10C, in complete contrast to what we had last week.” 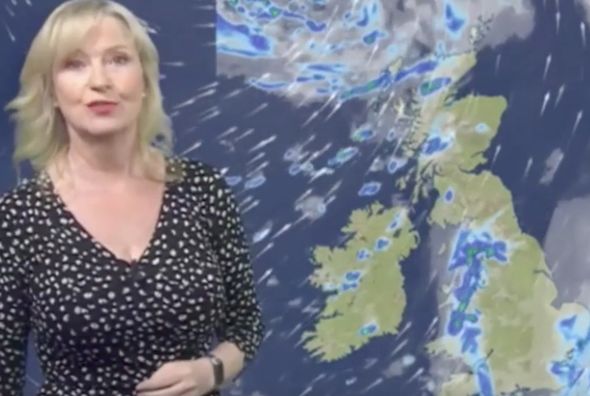 Met Office chief meteorologist Neil Armstrong said the UK will experience a “warmer air mass, with daytime temperatures reaching 11-12C in the south, replacing days which never got above freezing the week before.”

Despite the rising temperatures, winter hazards remain possible in the comings days as freezing rain and downpours continue to affect wide areas of the country.

Mr Armstrong said: “There are still some wintry hazards to get through over the next few days, with low temperatures, strong winds and further snow especially in Northern Ireland.” 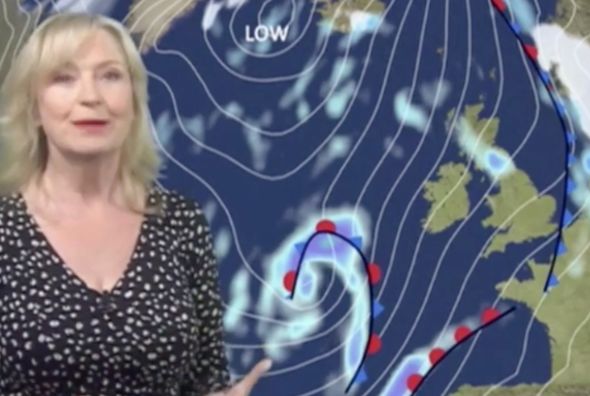 Brian Gaze, the founder of The Weather Outlook, has predicted temperatures could rise to as high as 21C by the end of the month.

In 2019, the UK recorded its warmest-ever February day, as the mercury hit 20.6C (69F) at Trawsgoed, Wales on February A new English record was also set, with 20.1°C recorded in Hampton Water Works, southwest London.

Because of the ongoing risk of heavy rain, the Environment Agency has issued 6 flood warnings and 66 flood alerts.

The warnings are active for the B1040 Thorney to Whittlesey Road to the South of the River Nene; low lying properties in the Upper Hull catchment; the north Bank Road alongside the River Nene, east of Peterborough and west of Dog-in-a-Doublet Sluice; the River Hull at Hull Bridge and Beverley; Roam Drain and River Hull at Hempholme, the River Burn from South Creake to Burnham Thorpe.