Zombie forest fires are on the rise.

According to a study published Wednesday in the journal Nature, fires in far northern forests that smolder throughout the wet, cold winters and pop up again in the spring could become more common because of climate change. That presents challenges — but also opportunities — for fire management, and for minimizing the release of greenhouse gases, the researchers say.

Most of us think of forest fires as being contained within a single year. And for the most part, they are. But in the Arctic-boreal forests of Alaska, Siberia, Canada’s Northwest Territories and similar landscapes, fires can burn deep into the carbon-rich soil where they linger and lurk, often undetected.

“When you think about a forest fire, most people think about trees burning,” said Sander Veraverbeke, a researcher at VU Amsterdam and an author of the paper.

The phenomenon has remained somewhat mysterious. Rebecca C. Scholten, a researcher at VU Amsterdam and lead author of the paper, said that when she first set out to study what are also known by the less catchy term “overwintering” fires, “I was doubtful I was researching a phenomenon that exists.” Now, she said, she has ample evidence, and knows that “they are connected to climate change and they are happening more often.”

The new study sets out to find how common the fires are, where they are and how to detect them. “What is cool about this paper is it is the first time that it’s been quantified,” said Merritt R. Turetsky, director of the Institute of Arctic and Alpine Research at the University of Colorado Boulder and an expert on peatlands and wildfire science. Dr. Turetsky did not take part in the new paper.

Working from a list of 54 overwintering fires identified by firefighters, the researchers developed an algorithm to identify additional zombie fires from sources including satellite and sensor data. Overwintering fires tend to be relatively rare, and so far make up a small percentage of overall fires. Still, a 2008 blaze in Alaska burned nearly 34,000 acres, “amounting to 38 percent of the annual burned area” in Alaska that year, the researchers said. 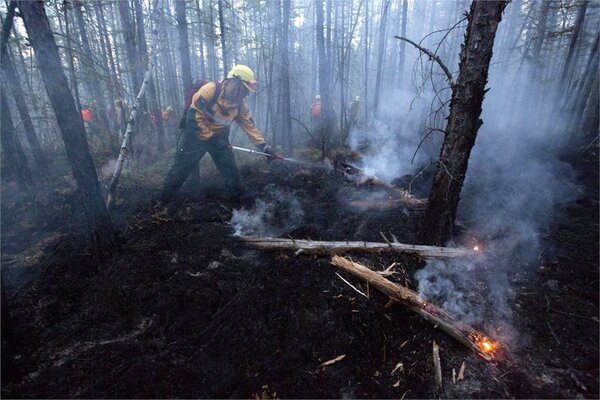 Most forest fires are caused by human activity or lightning. While overwintering fires are not common now, planetary warming is likely to change that, the researchers wrote. The Arctic is warming far faster than the rest of the planet, and warming is associated with summer temperature extremes, with fires covering large areas, and with deep burning.

Those factors interconnect: High temperatures lead to longer fire seasons and larger burn areas as well as drier soils that are friendly to fire. And because the fires occur in peat and peat-like soils high in carbon content, their burning can emit disproportionately large amounts of carbon dioxide and methane that contribute to global warming.

With the likeliest places where overwintering fires might occur outlined in the paper, the authors suggest, it could be possible for firefighters to focus on anticipating where re-emerging may occur and be ready to suppress them, saving firefighting resources and reducing emissions.

While the fires are not a strong influence from season to season currently, “that could happen,” said Dr. Turetsky. The worry is that “they will actually be a force shaping subsequent fire seasons,” she said.

J. Michael Waddington, Canada research chair at McMaster University in ecohydrology, the study of how water interacts with an environment, called the new research, which he did not participate in, “very elegant and excellent.” Dr. Waddington said that fires that burn deeper into the soil will become more common as the Earth warms. Because the new study shows the conditions that promote zombie fires, he said, “it does give fire suppression, fire managers, a little head start to anticipate whether the next year is going to be a problem.”

“Zombie” fires is the kind of phrase that some scientists disparage as sensationalistic, but the idea of a seemingly dead thing sputtering back to life is a powerful image that captures the imagination Dr. Veraverbeke acknowledged. “That’s part of our job, right? To communicate science.” Besides, he said, “It’s a great analogy.”

Dr. Turetsky suggested a different metaphor for the fires: ghosts. “It’s the past coming back to haunt the future,” she said.