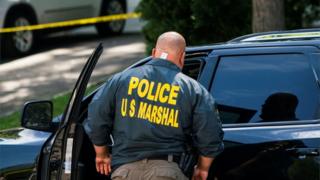 US police are investigating whether a body found after an attack on a federal judge’s family is that of the gunman.

Sources told US media the person had died of a self-inflicted gunshot wound but this has not been confirmed. The reports also said the man was a lawyer.

The son of Judge Esther Salas was killed in the attack in New Jersey on Sunday and her husband was badly injured.

A man dressed as a FedEx delivery man opened fire at their home, police said.

The suspect in the attack has not been officially identified, although he has been named by some US media.

A package addressed to Judge Salas was found inside his car, sources said.

The FBI is investigating and has appealed for help from the public.

The suspect’s body was discovered in Liberty in New York’s Sullivan County, about 130 miles (210km) from the crime scene, according to CBS News.

The motive for the attack was unclear. A local mayor and family friend said Judge Salas had received threats in the past.

Friends of the family told US media that Judge Salas’s 20-year-old son Daniel Anderl, a student, opened the door at the family home in North Brunswick at about 17:00 local time (21:00 GMT) on Sunday and was fatally shot.

The judge’s husband, Mark Anderl, 63, was then shot several times. Mr Anderl, who works as a criminal defence lawyer, was taken to hospital and was in a critical but stable condition in hospital, family said.

North Brunswick Mayor Francis Womack, who is a friend of the family, told ABC News that “as a judge, she had threats from time to time but everyone is saying that recently there had not been any”.

Judge Salas serves on the federal bench in New Jersey. She is the first Hispanic woman to serve as a federal judge in New Jersey.

Daniel Anderl, the couple’s only son, was due to resume university at the Catholic University of America in Washington in the autumn.

In a 2018 profile in New Jersey Monthly, Judge Salas said she thought her son would someday pursue a career in law, like his parents. “I don’t want to dissuade him, but I was pulling for a doctor,” she told the magazine.

“He’s been arguing with us since he could talk – practising his advocacy skills.”