Forecasters are already warning the rest of May will be chilly, rainy and windy. And bookmaker Coral has now cut the probability of it being the wettest in history from 5-1 to just 2-1. The record was set 109 years ago in 1912 when the nation had a 15.1in (384mm) dousing. Coral’s Harry Aitkenhead said: “This soaking wet May is not giving us much hope for a dry summer, so much so that we have now slashed the odds on this summer being the UK’s wettest ever. This month is already firmly odds-on to enter the record books as the wettest May we have ever had.”

The Met Office says we face thundery showers and below-average temperatures. It has also got a yellow warning – meaning everyday life could be disrupted – for persistent heavy rain in the South-west.

The agency’s spokesman Oli Claydon said: “Essentially the set-up in weather that we’ve got at the moment is set to remain for the foreseeable future.”

Oli admitted: “We’ve had some heavy rain in certain parts of the UK that may have contributed to that total significantly, so to assess how that’s going to play out across the rest of the month is quite tricky.” 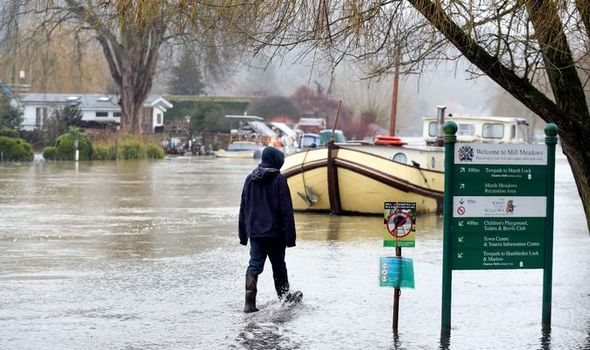 The Met Office long-range forecast from next Monday to May 26 reports it will “most likely be remaining unsettled throughout the period”.

It adds: “The North will perhaps see the best of any more settled weather, with the South most likely to see the bulk of showers and thunderstorms and any longer spells of more persistent rain.

“It’s likely to be breezy at times, especially around coastal areas in the South and West of the country.

“Temperatures will be near to or slightly below average, with the best of any warmer spells in the South-east, and with overnight frosts becoming less likely.”