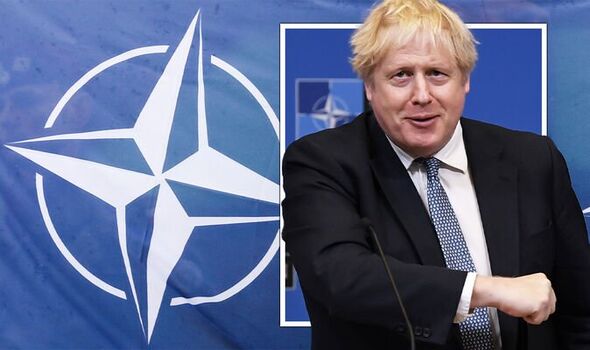 Ukrainian MP Oleksii Goncharenko is at the forefront of calls for Mr Johnson to take up the post when present Secretary General Jens Stoltenberg steps down next year – and senior figures in Tory ranks believe Mr Johnson has the experience, energy and convictions the position demands.

Mr Johnson has been made an honorary citizen of Odessa in recognition of his support for Ukraine, and President Volodymyr Zelensky expressed “sadness” at the PM’s resignation as Tory leader and described him as a “hero”.

Pressing for Mr Johnson to gain the Nato role, Mr Goncharenko said: “Boris Johnson’s leadership during this war has ensured vital military, economic and humanitarian supplies have been provided to Ukraine. The UK has been one of our most important supporters and has imposed meaningful sanctions on Russia.

“He would be the right person to take over from Jens Stoltenberg as he understands the challenges that Nato and the West faces. He will always support Ukraine in our fight against the 21st century’s Hitler and will support Nato members and Nato goals with the same level of unstinting support.”

A Government minister said: “On the world stage, Boris Johnson has been a fighter for freedom. He has shown his love of liberty at home and around the globe.

“His understanding of European politics, his relationships with our allies on the continent, and his defiant defence of the sovereignty of Ukraine marks him out as a statesman able to lead the continent through this period of challenge, conflict, and change.”

Another Government minister said: “As we all know, despite the hammering the PM has had in the UK, he is a very well respected politician abroad. I am sure there is much more to come from him.

“If he has the support of colleagues in Nato, it could be a perfect future role for him.”

He said: “Boris has actually led the western response to Putin. It was Boris who went to Sweden and Finland and urged the leaders of both countries to make applications for Nato membership which of course they did.”

The Clwyd West MP said he had met with a Ukrainian refugee who said the PM had “done more than any western leader to support Ukraine”.

Former armed forces minister Mark Francois praised Mr Johnson’s record on Ukraine, saying: “People will probably argue over Boris Johnson’s legacy for years – but one think which is clearly inarguable is his absolutely staunch support for Ukraine in the face of Russian barbarity. If he were to apply to become the Secretary General of Nato I suspect he could rely on President Zelensky for a reference.”

He said: “The countries who are on the frontline of an increasingly belligerent Russia, they are undoubtedly looking to Britain for leadership on our continent – more so than from Germany and France, who have cosied up to Russia… And so, I think the time has come for a British Secretary General of Nato and who better than somebody as recognisable as our former Prime Minister?”