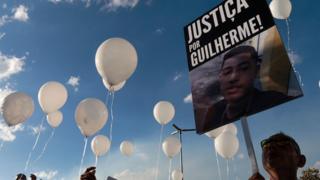 A week before the death of George Floyd in the US city of Minneapolis in May, Brazilians were mourning one of their own.

Fourteen-year-old João Pedro Mattos Pinto was killed while playing with friends during a botched police operation in a favela in Rio de Janeiro.

The two deaths happened thousands of kilometres apart, yet millions of people were united in grief and anger. “Black lives matter here, too,” Brazilians chanted in the weeks following the deaths.

But history keeps repeating itself.

Only last week, a police officer in São Paulo stepped on the neck of a black woman in her fifties. The video that surfaced showing the incident caused outrage. She survived, but so many do not.

There is much that connects Brazil to the US – guns, violence and these days their politics, too. But in the São Paulo favela of Americanópolis, people are hardly living the American dream.

Joyce da Silva dos Santos shows me a video of her son Guilherme celebrating his birthday with a big cake and candles. He was a 15-year-old with his whole life ahead of him. He had dreams of following his grandfather into the bricklaying business, of one day buying a motorcycle, too. But his dreams were cut short.

A few weeks ago, he disappeared outside his family’s house. His body was found dumped on the outskirts of the city. One policeman has since been arrested. Another, an ex-policeman, is still on the run.

“Guilherme was so loving, he cared for everyone,” Ms dos Santos tells me, hardly able to speak through her tears. She fears for her other children now. “We don’t know if when we leave home, we will come back – I don’t have the will to live anymore.”

In the street, the neighbours are enjoying a sunny Saturday afternoon, swigging beer and chatting. People here have come together since Guilherme’s death, but so much has changed.

“The police should be protecting us,” says a neighbour, also called Joyce, whose daughter was friends with Guilherme. “They don’t though, because of the colour of our skin.”

Last year police here killed nearly six times as many people as in the US and most of them were black.

“Police violence goes back to this complex way of accepting that some lives matter less than others,” says Ilona Szabo, executive director of the Igarapé Institute, a security think tank based in Rio.

“The stereotype of the criminals, in general, is that they are black men. So when you are in a very violent society like Brazil, being faced with a black criminal, it might lead to the excessive use of force by the police, because that’s the portrayal we accept. But I would say there is a part of society that supports this openly.”

No such thing as racism?

Brazil has a long legacy of racism. It was the last country in the Americas to abolish slavery in 1888. More than four million people were brought over from Africa, more than to any other country in the world and that has left deep scars.

“The Brazilian state didn’t create any kind of public policy to integrate black people in society,” says author and activist Djamila Ribeiro. “Although we didn’t have a legal apartheid like the US or South Africa, society is very segregated – institutionally and structurally.”

For a long time though, racism was not really talked about here. Brazilians were taught to believe that they lived in a racial democracy – where everybody got along without being discriminated against because of their colour. But, say activists, it is a myth. 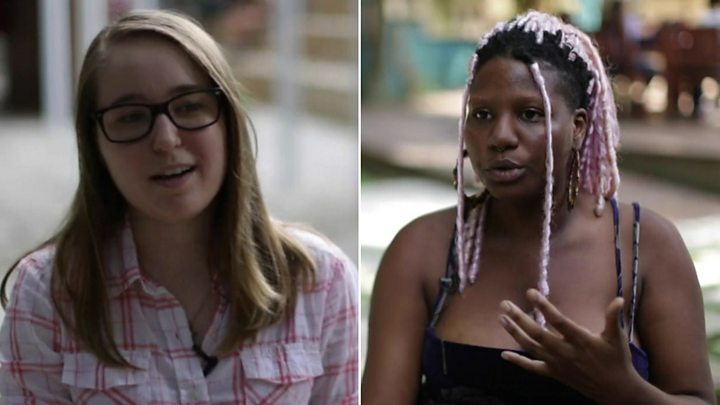 “They love samba, love black culture and carnival, but they don’t go on demonstrations against the genocide of black people,” says Ms Ribeiro. “They say it’s not a racial issue, it’s a class issue in Brazil.”

It is what President Jair Bolsonaro still believes.

“Due to this myth that everyone is mixed, even black people in Brazil sometimes have difficulty seeing themselves as black,” Ms Ribeiro explains. “Here, it’s not only about where you came from, it’s the way you look – so if you look white, you will be treated as white, even if your parents are black.”

It is, however, slowly changing.

“There’s been an increase in awareness nationally,” says Milton Barbosa, who founded the Unified Black Movement (MNU) in 1978 during Brazil’s military rule. “We still have to fight, but there have been important changes.”

One of the movement’s new generation of activists is 27-year-old Simone Nascimento. She was the first in her family to go to university and admits she is an example of progress. But the struggle continues and the pandemic complicates progress.

“Black people are dying from gunshots, from hunger and now from Covid,” says Ms Nascimento. She says police feel emboldened, a feeling which is further strengthened by Jair Bolsonaro’s talk of getting tough on crime and backing shoot-to-kill policies.

“As long as there’s racism, there’s no democracy – and fighting for democracy is fighting against the Bolsonaro government,” she says. “These are hard times.”