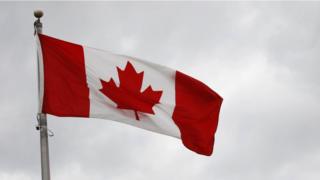 A human rights group has criticised Canada for failing to repatriate dozens of citizens with alleged ties to the Islamic State (IS) back from Syria.

Human Rights Watch, an international organisation, says 47 Canadians – including 26 children – have been detained for over a year.

Included in the list is Jack Letts, an Anglo-Canadian man who lost UK citizenship in 2019.

The dual UK-Canadian national was jailed after being captured by Kurdish YPG forces while trying to flee to Turkey in May 2017.

The Canadian government said the UK had “off-loaded” its responsibilities.

The report, published by Human Rights Watch, accused Canada of abandoning its international obligations and failing to provide consular assistance because of the Canadians’ alleged ties to IS.

“If Canada can bring home tens of thousands of citizens from around the world in a matter of weeks, surely it can find a way to repatriate fewer than 50 others trapped in horrific conditions in northeast Syria,” said Letta Tayler, senior crisis and conflict researcher at Human Rights Watch.

“The lives of Canadians are on the line, and the time to bring them home is now.”

During his daily press conference on Monday, Prime Minister Justin Trudeau defended the government, and said it is difficult to offer diplomatic assistance because of safety concerns in the region. Canada does not have a diplomatic presence in Syria.

“We have a responsibility as a government to ensure that Canadian citizens, particularly employees, are not put into danger, are not exposed to grave situations,” Mr Trudeau said.

“Syria is an area where we do not have any diplomats or any Canadians on the ground and therefore we work through intermediaries to try and provide consular assistance as best we can.”

Human Rights Watch is not the first international organisation to criticise Canada’s response.

In May, a panel of UN human rights experts urged the country to bring home 5-year-old Amira, who was being held in the al-Hol refugee camp, which houses thousands of family members of IS.

The girl was orphaned when her Canadian parents and brother died in a battle, the UN panel says.

Her uncle, who lives in Canada, has been trying to bring her to live with him, and has visited her in the camp, according to CTV News.

Prime Minister Justin Trudeau said the government is trying to bring her to Canada, but has to go through the “proper processes”.