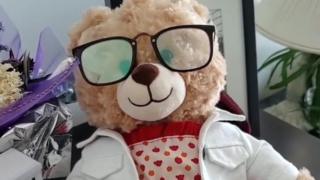 These were among the final and only words that Mara Soriano’s mother, Marilyn, recorded for her daughter.

Fitted inside a custom-made teddy bear, the voice recording was given to Ms Soriano as a Christmas present in 2017.

At the touch of the bear’s paw, Ms Soriano, who lives in Vancouver, Canada, could hear her mum’s comforting voice whenever she pleased.

But on Friday last week, Ms Soriano, 28, says those words were snatched from her.

She says the bear was stolen while she and her fiancé were moving to a new flat.

Desperate to recover the precious bear, Ms Soriano launched an online appeal, which has now attracted the support of high-profile celebrities such as Ryan Reynolds, George Stroumboulopoulos and Zach Braff.

Ms Soriano said she and her fiancé were unloading their U-Haul van when she received a phone call from a friend who had been in a biking accident.

Before rushing to her friend’s aid, she put the bag – a Herschel backpack – down next to the van, but forgot to tell her fiancé where she had left it.

In the few minutes she left the bag unattended, it had vanished.

She later checked security footage, which showed a man making off with the bag.

Ms Soriano told the BBC she was “absolutely crushed” when she discovered the bag had gone missing.

“I couldn’t believe I was so dumb to have let such a thing happen,” she said. “The backpack contained so much of our important documents and an iPad, a Nintendo Switch, my mum’s red Mickey Mouse wallet and, most importantly, her teddy bear.

“I’ve just been kicking myself since the theft, I know it’s silly, but it feels like I lost my mum all over again.”

‘The last reminder of the mum I knew’

Ms Soriano said her mum was diagnosed with cancer in 2010, when she was aged 18.

For seven years, her condition appeared to be stable, but in 2018, “she just kept getting sicker and sicker”, Ms Soriano said.

Her mum gave her the bear as a gift in December 2017 after she moved to Vancouver from Toronto.

For Ms Soriano, who came to Canada from the Philippines as a child, “the bear was the last reminder of the mum I grew up with, before she became my mum with cancer”.

Ms Soriano dressed the bear in her mum’s signature clothes – a red and white dress with a white jean jacket – and kept it on her desk.

Ryan Reynolds, the Canadian-American actor who stars in Deadpool, has offered a $5,000 (£3,881) reward for the return of the bear.

“I NEED THIS BEAR TO COME HOME!!!!!!” tweeted Zach Braff, who played JD in the US comedy series Scrubs.

Ms Soriano has distributed missing posters near her home and Vancouver Police has issued an appeal on Twitter.

But as of Monday, Ms Soriano said she was yet to find the bear, despite coming across a few leads.

For now, the excruciating wait goes on. “I’m hearing dumpster trucks outside and my heart is just sinking,” Ms Soriano said.