Wang was among more than 200 lawyers and legal activists swept up in 2015 signaling President Xi’s tougher approach. 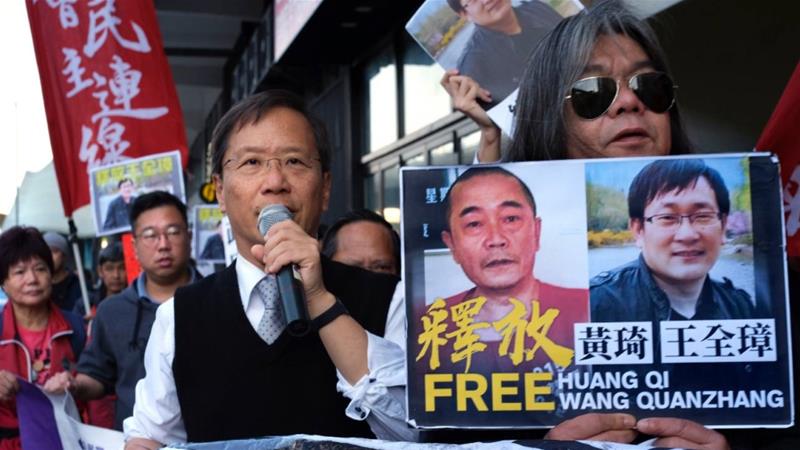 Wang Quanzhang, a well-known Chinese rights lawyer, has been been reunited with his family in Beijing after being released from prison following almost five years in jail.

Wang was also heard in the video saying, “Thank you very much,” as he hugged his frail wife, who reportedly had just returned from hospital after suffering from acute appendicitis.

“I feel like I’m dreaming really,” Li said in Mandarin between sobs. “How many times have I imagined this moment, this scene?”

In an interview with the South China Morning Post newspaper, Wang said he felt “a little dazed.”

“In the last five years, I’ve been completely disconnected from the outside world. I will try my best to get back to the world.”

A brief verbal exchange between Wang’s family and police officials was also captured on video and posted online, in which authorities were shown trying to enter their residence and were told that they were not welcome inside.

Wang was among more than 200 lawyers and legal activists swept up in 2015 in what became known as the 709 Crackdown for the date, July 9, when most of them were detained.

Wang, who was picked up in August 2015, had pursued land rights cases for poor villagers and represented members of the banned Falun Gong movement. He was sentenced in January 2019 for subverting state power.

In an earlier social media post, his wife Li, said Wang had been released on Sunday and taken to his house in Jinan, a city in the eastern Shandong Province.

It’s really so touching. After all these years!😭 Finally, #WangQuanzhang reunites with @709liwenzu and their son Quan Quan. https://t.co/fzJ3SI97e4

Rights groups outside mainland China said Chinese police have put other released lawyers under house arrest to isolate them from colleagues, friends and supporters.

While authorities had intimidated and harassed lawyers previously, the round-up signalled President Xi Jinping’s much tougher approach to quashing any possible threats to Communist Party rule.

A statement issued by six human rights groups before his release urged China to refrain from putting Wang under house arrest or surveillance and allow him to return to Beijing.

In a social media post, Yaqiu Wang, researcher of Human Rights Watch for China, wrote: “May this union be permanent. May they recover from all the torment inflicted by the Chinese Communist Party.”

She said Wang’s family “is a powerful reminder of why we do the work we do, why we must do it and why it is so worth it.”