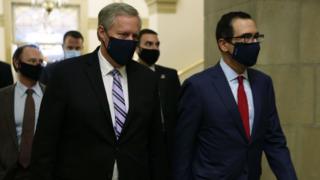 Last-ditch negotiations at the US Congress to forge another stimulus package for the coronavirus-ravaged economy have collapsed in stalemate.

Democrats and Republicans remain at odds over everything from unemployment benefits to financial aid for schools to cash injections for states’ coffers.

The US unemployment rate stands at 10.2%, above any level during the 2008 financial crisis.

Jobless benefits have expired, as did a federal moratorium on evictions.

Mrs Pelosi said in a news conference that she was willing to offer a compromise.

“We’ll go down one trillion, you go up one trillion,” she told reporters as she staked out her position, adding: “We have a moral responsibility to find common ground.”

In May, her Democratic-controlled chamber passed a $3.5tr (£2.7tr) stimulus bill. But it was rejected by President Donald Trump and his fellow Republicans who hold sway in the Senate.

As he entered Mrs Pelosi’s office on Friday, Mr Mnuchin called her proposal “a non-starter”.

Republicans prefer a package closer to $1tr total and want any deal to include legal protections for employers against virus-related health claims from workers.

They are also pushing to reduce the $600 unemployment benefits, which expired last month, and want far less aid to local governments than Democrats are seeking.

In a surprise press conference on Friday evening from his golf club in Bedminster, New Jersey, where he is spending the weekend, President Trump blamed Democratic congressional leaders for the impasse.

“Nancy Pelosi and Chuck Schumer continue to insist on radical left-wing policies that have nothing to do with the China virus,” he said.

He added: “If Democrats continue to hold this critical relief hostage I will act under my authority as president to get Americans the relief they need.”

Mr Trump said he may seek to defer the payroll tax, unemployment benefits and defer student loan interest until the end of the year, as well as extend the eviction moratorium.

The White House has previously suggested the president would take unilateral action through executive order. But it is unclear how much he can change by fiat, given that Congress controls federal spending.

After weeks of negotiations, during which federal unemployment support for millions of Americans ended and economic numbers indicate the recovery was stalling, congressional Democrats and administration officials were able to offer the nation… nothing.

Both sides agreed that something has to be done to help the unemployed, provide some support to schools that are struggling to cope with the pandemic and protect those facing eviction. The challenge was there was still at least a trillion dollars in daylight between their two plans, and neither side seemed willing to budge.

That suggests that both sides are willing to endure the political and economic fallout of a continued impasse.

Democrats may believe that Americans will blame the president or recalcitrant Senate Republicans who have shown little interest in more deficit spending. The White House may hope that whatever unilateral actions Donald Trump can take will offer him some political protections.

The bottom line, however, is that millions of Americans will teeter closer to the edge of the financial abyss – and with Congress leaving town for summer recess, there’s little sign of substantive help from Washington anytime soon.

The US unemployment rate continued to fall in July in the US, but it was a much lower decrease than in May and June, denting hopes of an economic revival.

Negotiations have been going on for the past two weeks, as the US death toll from the coronavirus pandemic surpasses 160,000.

The US has far more Covid-19 cases by volume than any other country – more than 4.9 million – and its rate of infection has risen steadily throughout the summer.

Congress has already allocated some $3bn for pandemic relief so far.

Some Republicans in Congress do not wish to spend any more. Nearly half of Republican senators say they would oppose any new relief bill at all.

“We’re asking them again to be fair, to meet us in the middle, not to have a ‘my way or the highway attitude,’ which they seem to have.”