The US is restricting travel from Brazil after the South American nation became the country with the second-highest number of coronavirus cases in the world.

The restrictions are a blow to Brazil’s right-wing president, Jair Bolsonaro, who like Donald Trump has promoted unproven medicines and resisted calls for greater social distancing measures.

The US Embassy in Brasilia said the new restrictions will come into force on 28 May. 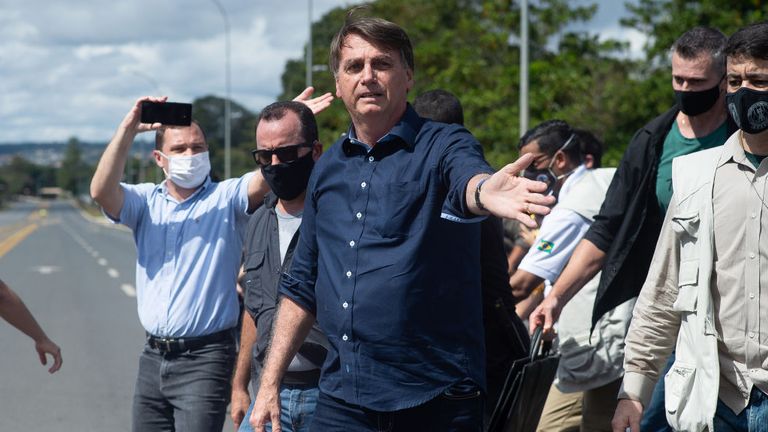 Under the restrictions, most non-American citizens will be prohibited from travelling to the US if they have been in Brazil in the last two weeks.

Those holding green cards, those who are close relatives of US citizens and flight crew members are among a select few who would be exempt.

The embassy said: “The US maintains a strong partnership with Brazil and we work closely to mitigate the socioeconomic and health impacts of COVID-19 in Brazil.”

Brazil’s foreign ministry said the decision should be seen in the context of “important bilateral collaboration” to fight the coronavirus outbreak, and highlighted the fact that the US had donated $6.5m and promised 1,000 respirators.

Mr Trump hasn’t commented personally, but members of his administration have played down the move.

Kayleigh McEnany, the White House’s press secretary, said the new restrictions would help ensure foreign nationals do not bring additional infections to the US, but would not impact the flow of commerce between the two countries.

National security adviser Robert O’Brien told CBS’ Face the Nation: “We hope that’ll be temporary, but because of the situation in Brazil, we’re going to take every step necessary to protect the American people.”

It comes as the row over Mr Trump’s support for an anti-malarial drug with unproven ability to treat COVID-19 continues.

An adviser to Brazil’s president, Filipe Martins, wrote that Mr Trump had “opened a direct line for the exchange of information about the protocol for using hydroxychloroquine and other treatments for the virus”.

The US Food and Drug Administration warned last month about using the drug to treat coronavirus, citing “reports of serious heart rhythm problems” in patients who use the medicine.

Mr Bolsonaro has been insisting the drug has potential and defying of state isolation orders.

It has led to two health ministers quitting in a month, both of whom were trained doctors.

The acting head of the health ministry, an army general, issued advice this week that use of hydroxychloroquine in coronavirus cases should be expanded.

More than 22,000 people have officially died in Brazil so far, and Sky News reported last month about hundreds of people being buried in graves outside the city of Manaus.