Spanish troops brought in to help tackle the spread of the coronavirus outbreak have discovered elderly people “dead and abandoned” at their retirement homes, according to the country’s defence minister.

Some elderly residents were “completely left to fend for themselves, or even dead, in their beds”, Margarita Robles told Spanish TV channel Telecinco when discussing the COVID-19 crisis.

She did not say what had caused the deaths, how many people the soldiers found or where they were discovered, but she said authorities would use the full force of the law to punish those responsible. 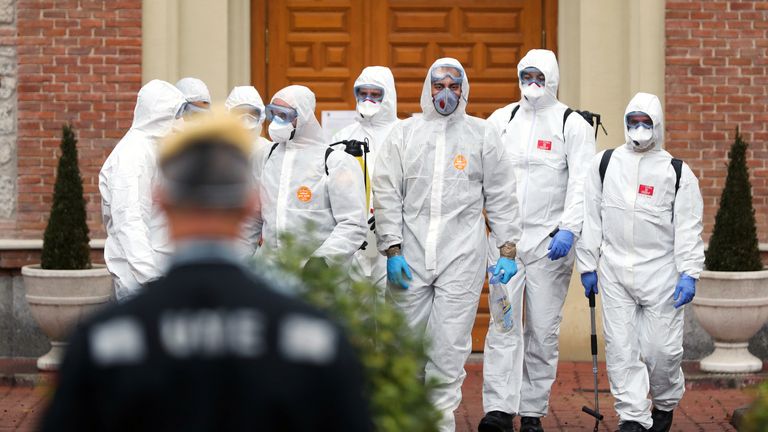 The Defensor del Paciente, a privately-funded patients’ ombudsman group, said it has filed complaints of negligence with the public prosecutor and asked for in-depth investigations into the management of three homes nationwide.

The number of coronavirus-related deaths in Spain has risen by 514 to 2,696, with more than 6,000 new cases reported.

There are about 5,500 care homes across Spain and all of them – of which two-thirds are privately run – are locked down, with their almost 400,000 elderly residents cut off from their families.

Many homes are being asked by the country’s overwhelmed hospitals to look after the seriously ill, but they lack ventilators and must compete with hospitals for scarce medical equipment and virus testing kits, according to industry representatives.

Nurses, doctors and other health workers have echoed the complaints of their fellow colleagues in other countries, saying they do not have enough equipment, like masks.

Spain’s national health service is “demonstrating a great capacity to respond in an exceptional situation”, said the country’s health minister Salvador Illa, who warned the next week would be difficult, and that the epidemic could reach its peak in Spain in the coming days.

In some homes, staff said they were rationing masks or making their own out of cloth, or wearing disposable gowns for many of their shifts.

Some workers have reportedly said they are too scared to go to work, while others had fallen sick, leaving homes short-staffed during a time of unprecedented need.