Home » World News » Coronavirus: Italy is traumatised and normality is only a distant dream

Europe watched Italy’s human catastrophe unfold and was warned about what was to come.

For Italians it was too late to prepare – they had to learn the horrors of this pandemic as they lived them.

When Italy’s government announced the first lockdown in Europe, few could have predicted how long it would last.

Even as Italy moves to “phase 2” from Monday, the country is lifting measures more slowly and more cautiously than most others.

Perhaps little wonder when you see the trauma this country has endured in little over two months.

Even in the early days of lockdown, you could feel the country was in a state of high anxiety. As Italians saw the health emergency escalate, they also had to process the shock of being the first country in Europe ordered to stay home.

One conversation remains etched in my memory more than many others.

On day two of lockdown I met Aurelio Fragapanni waiting outside a pharmacy to collect his sister’s medication. He displayed the charisma and warmth shown by so many Italians.

As a senior citizen he was in the virus’s high risk category so I asked if he was scared. “I get emotional, but not for me,” he replied. “People aren’t prepared.” Few could have been prepared for what the next two months would hold.

There was no frame of reference to predict the events of this pandemic.

The first to show its hospitals overrun with the sick.

The first to call in the army to transport the dead.

The first to launch a criminal investigation into care home deaths.

What we were seeing and hearing was shocking.

In exactly 10 weeks Italy lost more than 28,000 of its citizens to COVID-19. That doesn’t include most of those who have died in residential homes.

More than 180 doctors and nurses have also lost their lives to the coronavirus – another two have taken their own lives.

The head of infectious diseases at Spedali Civili Hospital in Brescia, Lombardy, described the trauma of working with the fear of dying. More than 300 of his colleagues have tested positive for the virus.

“We were asking each other who will be the next and that, of course, is psychologically demanding. Also because, apart from being colleagues, we are friends.

“We are also isolated, each of us at home, because we fear also to maybe transfer the contagion to our beloved ones.

“So if you put all that together, the workload, the fatigue, the tiredness, that is fairly psychologically demanding.”

In the early weeks of Italy’s outbreak there was a sense of hope and optimism.

Italians gathered in their windows and balconies to sing together and say “Andrà tutto bene” – everything will be alright.

But as the number of dying continued to escalate, hope faded. 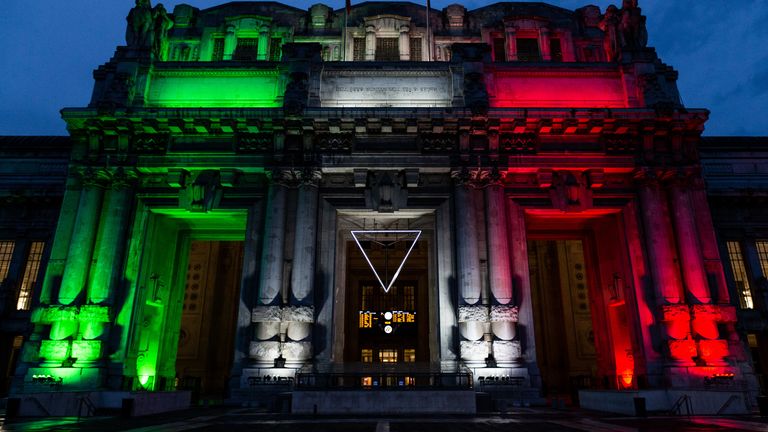 The lockdown was tightened further. Even exercise was restricted to the close vicinity of where you lived. The number of police checkpoints seemed to increase. We saw fewer and fewer people outside.

Almost everyone we spoke to was dealing with their own personal struggle.

“For a single old man staying at home alone it’s difficult,” said a pensioner sitting alone in one of Rome’s squares. “I have no relations. It’s sad. But you know, better than being infected.”

Stefano Capelli’s taxi earnings had dropped to €30 (£26) a day. I asked how long he could last financially. “Maybe one month. Maybe,” he replied.

If his predictions were correct, he will have run out of money around three weeks ago.

The lockdown, border closures, and travel restrictions have hurt Italy’s economy. Despite pressure to lift measures sooner in the south of the country, where the infection is lower but poverty is far higher, the government appears to be taking no risks.

Italians realise that normality as they knew it will not resume anytime soon. This is all the more apparent when you see the detailed conditions being set by the government for lifting measures.

The price of facemasks has been fixed too but there’s ongoing debate about whether to make them mandatory outside. It is already compulsory to wear them on public transport, in shops, and in work places.

Italy has seen how the virus spreads at frightening speed and the slow painful fight needed to bring it under control.

The characteristic warmth of Italians has been replaced by an obsession with personal space. Even the physical act of wearing a mask seems to have silenced people’s spirits.

This would have seemed inconceivable a couple of months ago.

But it’s hard to imagine life as before.

The national trauma of the first outbreak perhaps still too raw.