India has the third-highest number of cases after US and Brazil; its 56,706 fatalities are fourth-highest in the world. 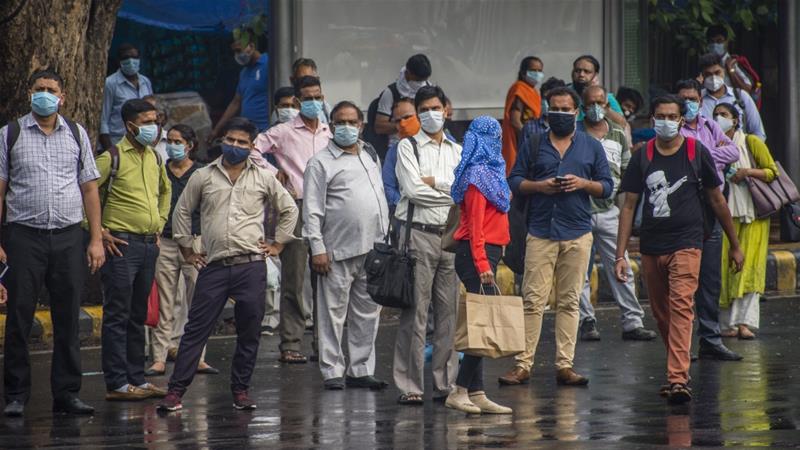 India’s reported coronavirus cases have gone past three million, with the country leading the world in new infections as the disease moves through impoverished rural areas in the north and the wealthier but older populations of the south.

The new infections reported on Sunday marked a sharp decline from the previous 18 days when India had reported more than 60,000 cases daily.

Cases have levelled off in India’s two largest cities, with serological surveys showing widespread prevalence among the residents of the capital, New Delhi, and financial centre Mumbai.

New hotspots continue to spring up in rural areas of the Uttar Pradesh and Bihar states in India’s north, and in the southern states of Telangana, Karnataka, Tamil Nadu and Andhra Pradesh.

“We are seeing that the virus moved from the metropolitan areas like Mumbai, New Delhi and Chennai to more rural areas and that is the concern. As it moves from cities that have the best healthcare infrastructure in the country to parts of the country that have very poor healthcare systems,” said Al Jazeera’s Elizabeth Puranam, reporting from the Indian capital.

“The Indian government is always positive. On Saturday, the health minister said India has the best recovery rate in the world. But the problem here is that the serological survey shows a different picture.”

India has the third-highest caseload after the United States and Brazil, and its 56,706 fatalities are the fourth-highest in the world.

The western state of Maharashtra, which has India’s financial hub Mumbai as its regional capital, is the worst-hit in India with 671,942 cases and 21,995 deaths.

“Infrastructure resources need to be augmented a lot more to make testing available, to instil greater confidence in the public health system so that people come forward even with relatively minor symptoms and get tested,” Rajib Dasgupta, who heads the Centre of Social Medicine and Community Health at New Delhi’s Jawaharlal Nehru University, told Al Jazeera.

“And the other thing that is crucial for containing the virus is the extend of which people practice and certainly enhance preventative behaviour such as wearing masks and social distancing.”

India’s first cases were reported in the southern state of Kerala in late January.

They were three university students who had been studying in the initial coronavirus epicentre of Wuhan, China.

But community transmission took hold in cities thousands of kilometres to the north as the financial centre of Mumbai reported huge spikes in early May followed by New Delhi, the capital.

Nearly 600 million Indians live in rural areas, and with the virus spreading fast across India’s vast hinterlands, health experts worry that hospitals could be overwhelmed, with a low rate of testing making it all the more difficult for the authorities to track and contain the disease.