Spain has become the third country to confirm more cases of coronavirus than China – as its number of deaths rose by 812 in a day to reach a total of 7,340.

Confirmed COVID-19 cases have increased by 6,398 since Sunday to reach 85,195 in total, Spain‘s health ministry said.

The country has now joined the United States and Italy in having more coronavirus cases than China, which had confirmed 82,156 cases as of Monday. 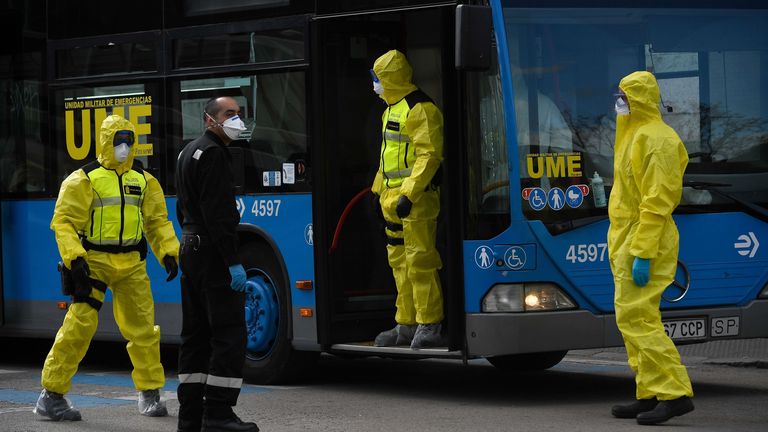 At midday on Monday, a minute’s silence was held in Madrid, Spain’s hardest hit city, for those who have died as an adagio was heard in one of the capital’s best known squares, Puerta del Sol.

Monday’s figures for those who have died in Spain were slightly less than Sunday, when 838 people died – the highest number yet for the country.

Authorities stepped up the country’s 15 day lockdown on Monday, with a new two week period of “hibernation” to alleviate pressure on the healthcare system, a Spanish Cabinet member said.

Only workers in hospitals, pharmacies, the food supply chain and other essential industries are allowed to work until the end of Easter, in mid-April, while everyone else has been asked to stay at home and scale back their work.

Spain’s government has ordered that flags be flown at half-mast and a minute’s silence be observed every day to pay respects to those who have died.

With a population of 47 million compared to China’s 1.14bn, Spain’s healthcare system is struggling to cope with the number of seriously ill patients at once, with hotels converted into makeshift hospitals and a Madrid ice rink turned into a temporary morgue. 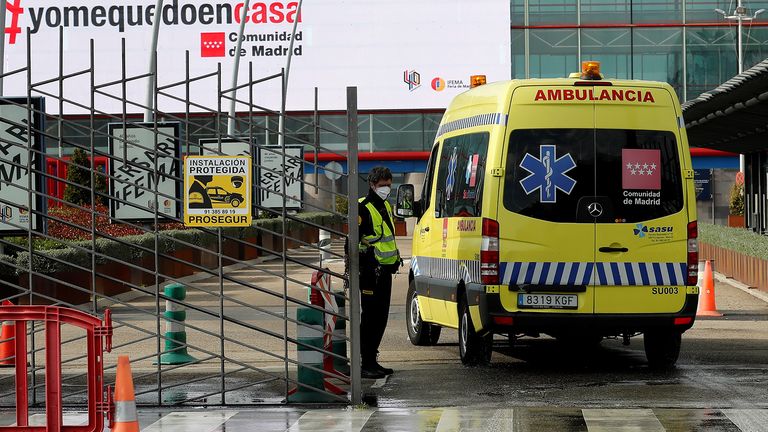 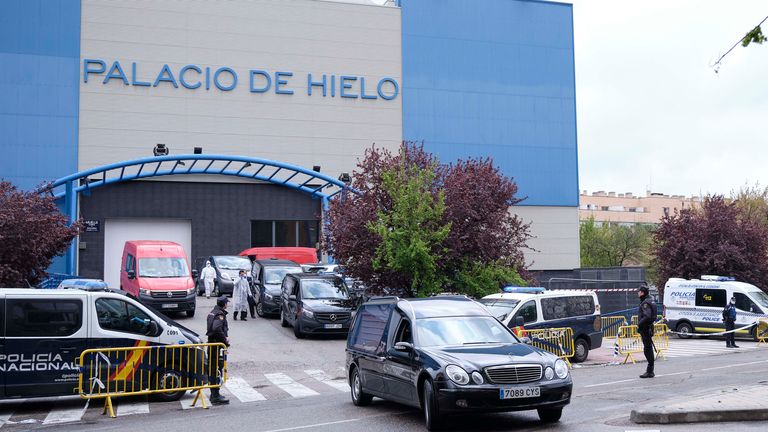 At least six of Spain’s 17 regions have reached their limit of ICU beds, with three more close as Madrid started using a convention centre as a hospital and field hospitals continue to be frantically built.

Also on Monday, a health official said Spain’s health emergency chief, Fernando Simon, had tested positive for COVID-19. He is leading the country’s coronavirus response and is in regular contact with Prime Minister Pedro Sanchez.

Health official Maria Jose Sierra, who replaced Mr Simon at a daily news conference, said Spain’s trend in daily infections had changed since a lockdown was imposed on 14 March, with new infections now rising at about 12% a day over the past five days instead of the previous 20%.

She also announced 12,298 health workers in Spain have tested positive for coronavirus – about 14% of the country’s cases, roughly the same proportion as last week.

Spain and nearby Italy account for more than half the world’s 34,000 coronavirus deaths, with Italian officials cheering when they reported only 756 deaths in one day on Sunday.

Italy has reported 97,689 infections and 10,779 deaths so far, but on Sunday said the number of confirmed cases had increased by only 5.4% in the past 24 hours and deaths had decreased by about 10% a day since Friday.

The school shooting is fake. Can it prepare an officer for a real one?