Indonesia has recorded another record amount of COVID-19 cases, as the government admits it is facing a “long-term” crisis.

The country is facing one of the worst outbreaks in Asia. 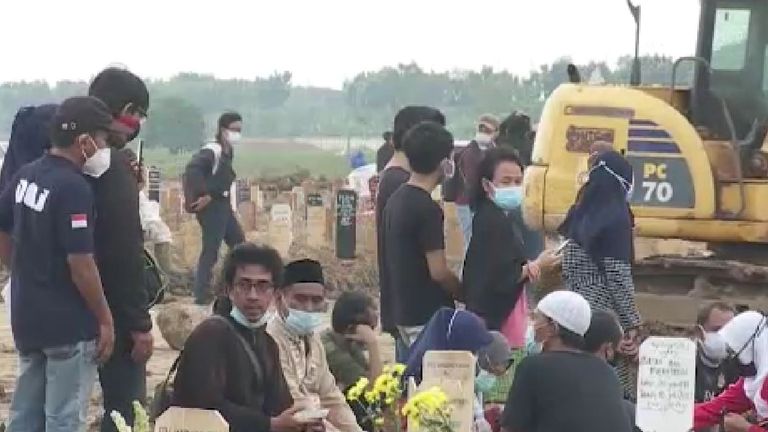 In an interview with Sky News, Professor Wiku Adisasmito, the spokesperson for the Indonesian COVID-19 taskforce, blamed the huge rise in cases on people travelling during the Eid holidays, the emergence of the Delta variant and communities which “have grown careless in maintaining health protocols”.

He said that medical workers, who have mainly received two doses of China’s Sinovac vaccine, will receive a booster shot.

The country’s healthcare system has appeared close to collapse on the main island of Java.

Some hospitals are full and are turning patients away.

Others have used tents to create makeshift wards in the street. 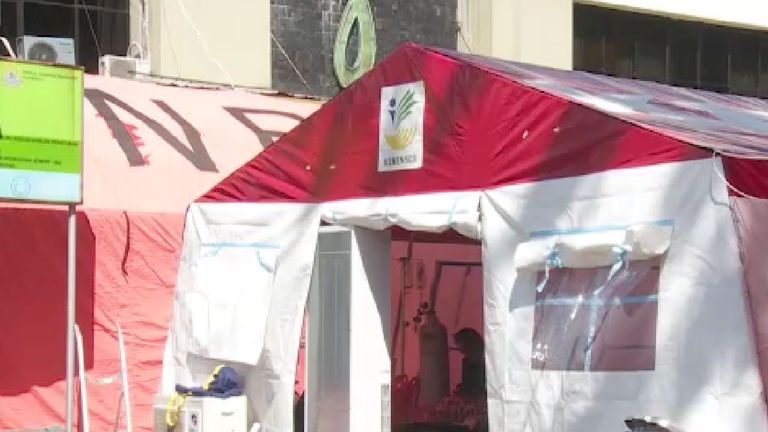 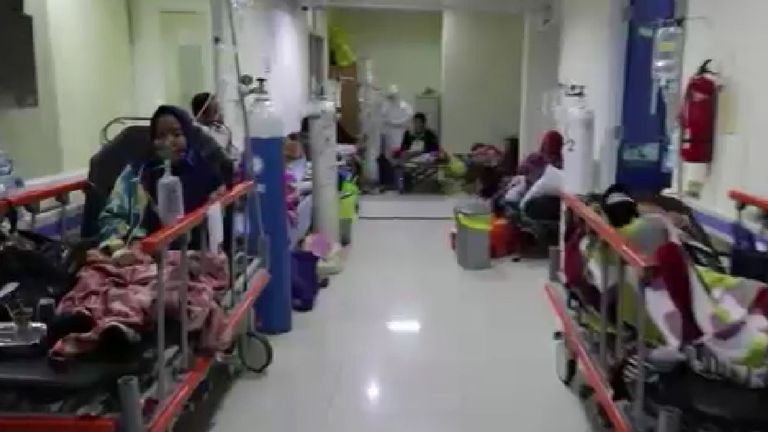 Oxygen supplies have been running low, with relatives of patients buying their own oxygen.

Agus Sudarmardi was caring for his wife, who tested positive for COVID 19, in a tent outside a hospital in Bekasi, near Jakarta.

He said: “We brought everything we needed including our own oxygen, so, we do not increase the burden of the hospital since the oxygen stock in the hospital is empty.

“People who already have oxygen are getting treatment, but the hospital doesn’t know where to put patients without oxygen, so often the patient will get short of breath and die.”

People are also buying medicine themselves, in a bid to get treatment that hospitals are struggling to provide. 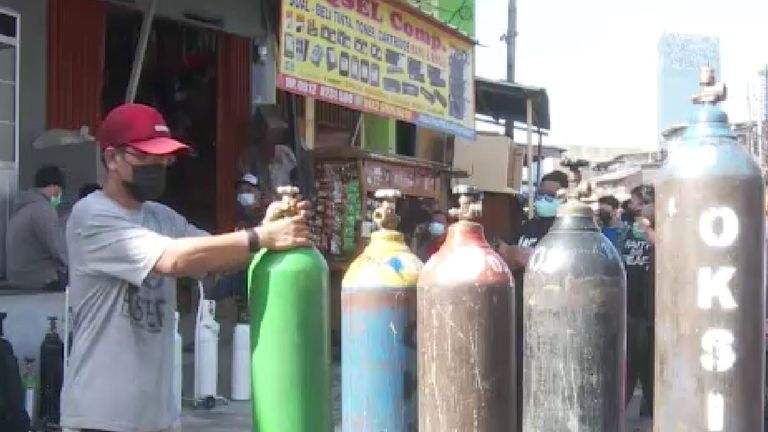 The Pramuka street market in Jakarta was full with relatives seeking to buy over-the-counter medicine for their loved ones.

“We know that now many people are infected but they are not handling it effectively,” she said.

“Meanwhile we need to treat them immediately and after I found out that my son got infected, and we already know the list of COVID drugs sold in the market, so I decided to search these drugs so I don’t have to wait for Puskesmas [government health clinics].”

Others are buying unproven, potentially dangerous treatments, such as Ivermectin, a deworming medicine usually used on animals.

The US Food and Drugs Administration (FDA) has said people should not use it to treat COVID-19 and that the medicine can cause “serious harm” when taken in large doses.

Yoyon, a stall owner at Pramuka, said his stock of Ivermectin sold out in three days early in July. 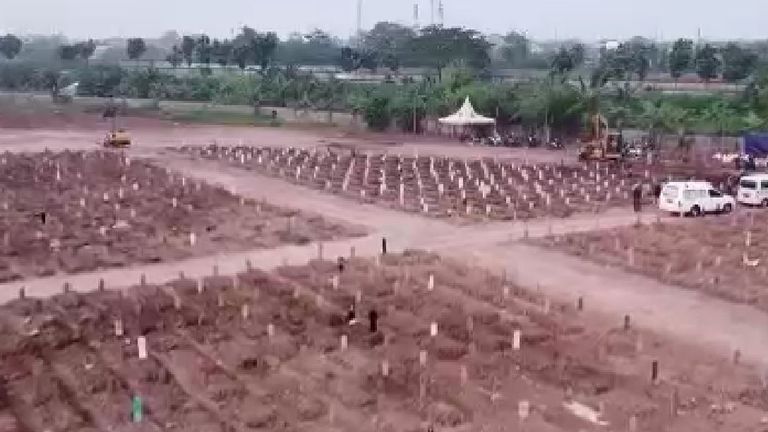 “We already explained to them that these medicines are empty but since many people would like to purchase these medicine so, they are still trying to find them.”

Professor Wiku defended the government’s approach when asked if lockdown restrictions should have been applied sooner.

He said: “We have already had restrictions since the past Christmas break last year, and also the New Year.

“We found the Delta variant at the time too. And the cases reduced a lot until mid-May.

“But because of the Eid holidays, people still travelled to some areas and that caused the problem with the rise in increase right now. And finally [now] we have stronger restrictions.”

The government, he said, was working to ensure greater oxygen supplies, both produced domestically and sourced abroad, and was modifying its vaccine strategy to give frontline medical workers a third, booster shot. 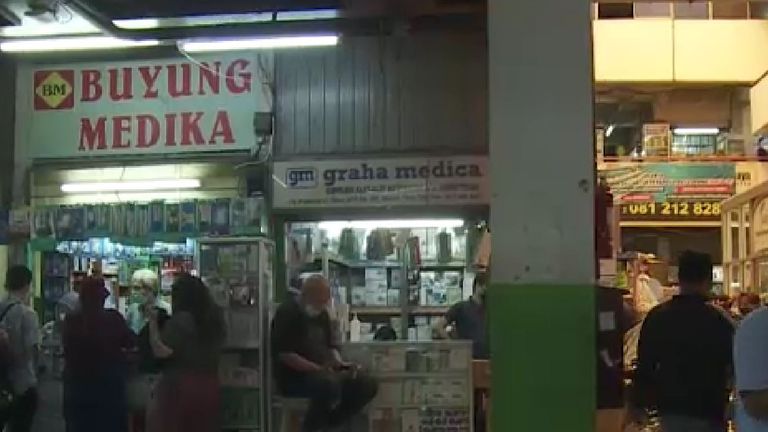 Hundreds of medical workers have been infected, despite being inoculated with China’s Sinovac vaccine.

There have been fears over its efficacy against the Delta variant.

Thailand has also announced it will give booster shots to those who have had the Sinovac vaccine.

Professor Wiku said the government had no issues with Chinese vaccines.

“We started with a vaccine from China because that’s available for us. And then we want to make sure it offers protection to people.”

“If it’s not, then it has to be boosted. And it will apply to any vaccine,” he said.

But the country’s vaccine rollout to the general population has been sluggish, with only around 5.5% of the population fully vaccinated. 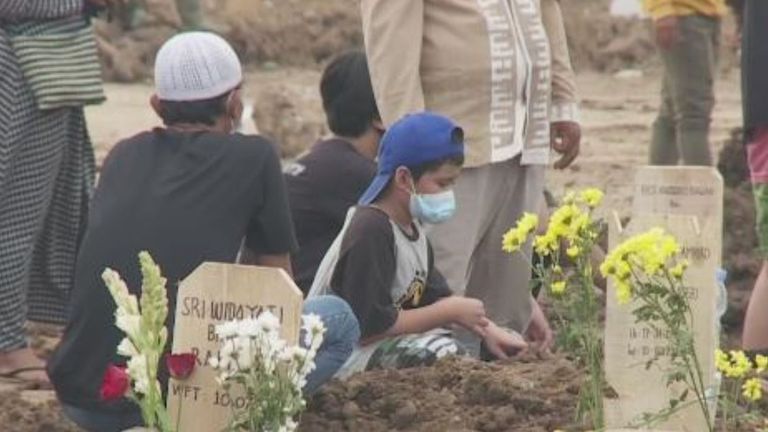 As a result the death toll is much higher than in countries with similar daily case numbers but greater vaccination.

The horrifying death toll is most visible at the Rorotan cemetery in Jakarta.

Families there were sitting on the earth mourning their relatives, as diggers still worked behind them to excavate fresh graves.

Ten coffins arrived each hour, shrink wrapped in plastic and carried by people in hazmat suits.

Agus Salim, who previously worked tidying the graveyard, said they were now digging 100 graves each day.

“We feel afraid, particularly we’re afraid to get infected and bring it to our families but this is our duty and there is nothing we can do.”