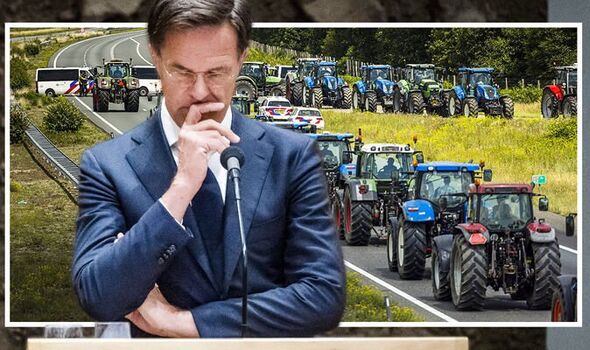 They are fuming at plans to slash pollutants – such as nitrogen oxide and ammonia – by 50 percent by 2030. The Netherlands’ farmers claim the move unfairly targets them and shows little regard for their future and the future of the agricultural sector, which is vital to the economy.

It could even lead to a reduction in livestock and the buying up of farms whose animals produce massive amounts of ammonia.

On Saturday, protesters demonstrated in front of several public buildings with manure and slurry after politicians voted on proposals to slash emissions of damaging pollutants, a plan which could force farmers to cut their livestock herds or stop working altogether.

Prime Minister Mark Rutte’s Government says the emissions of nitrogen oxide and ammonia, which livestock produce, must be drastically cut back close to nature areas, which are part of a network of protected habitats for endangered plants and wildlife stretching across the EU.

Monday’s protests prompted Amsterdam’s aviation hub, Schiphol Airport, to urge travellers to only use public transport to reach its terminals as fears emerged the blockades would target airports.

Fishermen, meanwhile, acting out of solidarity with the farmers, blockaded a number of Dutch harbours.

Police looked on but did not immediately take action as some 25 tractors parked outside a distribution centre for supermarket chain Albert Heijn in the town of Zaandam, just north of Amsterdam.

Placards and banners on the tractors included messages such as “our farmers, our future”.

As tractors gathered outside the parliament building last month, prime minister Mark Rutte said farmers had the right to protest but not to break the law.

“Freedom of speech and the right to demonstrate are a vital part of our democratic society, and I will always defend them,” Mr Rutte said.

The umbrella organisation for supermarkets called on police to take action and warned of possible shortages on supermarket shelves.

“Blockades of distribution centres hurt the citizens of the Netherlands.

Supermarkets do everything they can to keep the stores stocked, but if blockades continue, it could lead to people not being able to do their daily shopping,” the Central Bureau for Food Trade said in a statement.

Traffic authorities warned motorists to prepare for delays and possible slow-moving tractors on the nation’s motorways, but said there were few problems early on Monday for commuters, possibly because many people opted to work from home rather than get stuck in traffic.

According to LTO, there are nearly 54,000 agricultural businesses in the Netherlands with exports totalling 94.5 billion euros (£81.3 billion) in 2019.