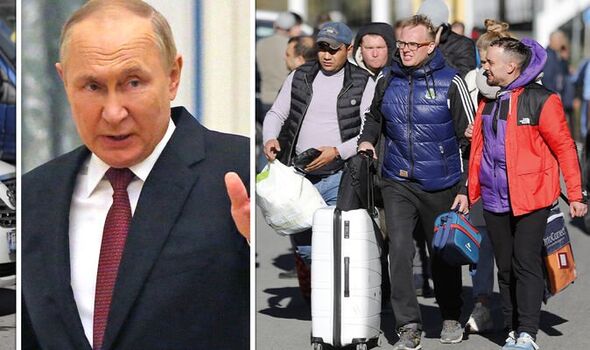 The Institute for The Study of War said Vladimir Putin’s regime faced a “daunting task in trying to calm” people who fear they will be called up to fight in Ukraine.

Russian conscripts are deserting their barracks after being made to sleep on the floor because there are no beds.

And the Kremlin is failing to convince the Russian population “who can perceive the real mistakes all around them.”

The UK Ministry of Defence said the Russians are increasingly aware of their military losses.

Vladimir Putin is drafting 300,000 “reservists” in a bid to regain a foothold in the war after losing huge swathes of land.

Georgia and Kazakhstan said that tens of thousands of Russians had flooded into their countries from neighbouring Russia as military-aged men flee the Ukraine military call-up.

The Black Sea nation of Georgia said the number of Russians arriving daily has nearly doubled.

“Four to five days ago 5,000-6,000 Russians were arriving in Georgia daily. The number has grown to some 10,000 per day,” Interior Minister Vakhtang Gomelauri told journalists.

“Most of them are forced to leave because of the hopeless situation. We must take care of them and ensure their safety.”

The Institute for The Study of War said Vladimir Putin’s regime faced a “daunting task in trying to calm” what it described as “a distraught and panicking population” while still mobilizing sufficient troops.

On its latest update on the conflict, the ISW said: “The Kremlin is attempting to message its way out of the reality of major problems in the execution of its ‘partial mobilization’ but its narratives are unlikely to placate Russians who can perceive the real mistakes all around them.”

The Kremlin has attempted to blame “individual errors of local authorities” for the “mistakes” in who is being called up, the ISW said, but added “The violations are clearly too common to be merely the result of individual errors, however, and Russian citizens can see them all too clearly.”

Opposition to the mobilisation has seen more than 2,000 people detained at protests across Russia, while thousands of people have reportedly fled the country.

the UK’s Ministry of Defence warned President Putin could use speeches to both houses of the Russian Parliament on Friday “to formally announce the accession of the occupied regions of Ukraine to the Russian Federation”.

It said: “Russia’s leaders almost certainly hope that any accession announcement will be seen as a vindication of the ‘special military operation’ and will consolidate patriotic support for the conflict.

This aspiration will likely be undermined by the increasing domestic awareness of Russia’s recent battlefield sets-backs and significant unease about the partial mobilisation announced last week.”