Home » World News » Drought in U.S. Is Expected to Persist, and Spread, Through the Spring

Winter precipitation amounts were not enough to significantly improve conditions in much of the country, government scientists said. 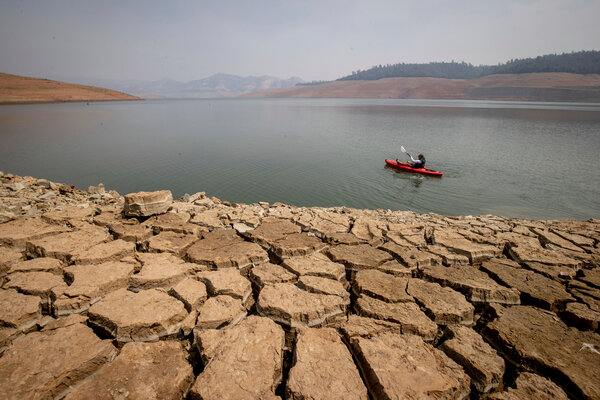 Drought conditions are likely to continue across more than half of the continental United States through at least June, straining water supplies and increasing the risk of wildfires, the National Oceanic and Atmospheric Administration said on Thursday.

Nearly 60 percent of the continental United States is experiencing drought, which is the largest part since 2013, NOAA said in issuing its spring outlook, a broad climatic forecast for April, May and June. While these conditions are not new, the agency expects them to worsen and spread in the coming months because of above-average temperatures and below-average precipitation.

That is a turn back in the wrong direction after a winter in which some drought-stricken Western states had seen improvement. And while those states remain in better shape than they were last summer, some states in the Southern Plains are in significantly worse shape.

Jon Gottschalck, the operational branch chief at NOAA’s Climate Prediction Center, said during a call with reporters on Thursday that the few patches of the Southwest and the Southern Plains not already experiencing drought — namely parts of Arizona, Kansas and Texas — were expected to start.

Lake Powell, one of two huge reservoirs on the Colorado River, fell this week to its lowest level since it was created more than 50 years ago with the construction of Glen Canyon Dam. It is getting closer to a threshold that would shut down hydropower production at the dam.

The forecast is also bleak in California, with a majority of the state returning to “severe” or “extreme” drought.

“The snowpack is below average for much of California, and there’s really very little time now to make up any precipitation deficits,” said Brad Pugh, the operational drought lead at the Climate Prediction Center. Coupled with the likelihood of above-normal temperatures, he said, “that would certainly be a favorable situation, unfortunately, for severe drought there in Northern and Central California through the summer.”

In the Central Valley, the three-year precipitation total is likely to be the lowest since modern record-keeping began in 1922, said Brett Whitin, a hydrologist at NOAA’s California Nevada River Forecast Center.

Global setbacks. The war in Ukraine and political considerations are complicating the efforts of the United States and Europe, the two biggest polluters in history, to slow down global warming — just as scientists warn of intensifying hazards.

Air pollution and redlining. A new study shows how urban neighborhoods that were redlined by federal officials in the 1930s tended to have higher levels of harmful air pollution eight decades later, revealing how the racist policy contributed to enduring inequalities across the United States.

An Amazon tipping point. The Amazon is losing its ability to recover from droughts and land-use changes, a study found, adding to concern that the rainforest is nearing a point where much of it will be replaced by grassland, with vast consequences for biodiversity and climate change.

Struggling to adapt. The dangers of climate change are mounting so rapidly that they could soon overwhelm the ability of both nature and humanity to adapt, according to a major U.N. report. The lack of prompt action is pushing some scientists to go on strike.

All of this increases the risk of wildfires, which have become larger and more frequent in recent years. In the United States, a study published this week by researchers at the University of Colorado Boulder found that from 2005 to 2018, fires occurred twice as often in Western states and four times as often in Great Plains states compared with the previous two decades. And globally, the most devastating fires will occur with more regularity as climate change worsens, according to a recent United Nations report.

An underlying factor in the conditions that NOAA expects is La Niña, a climate pattern that developed in 2021 for the second year in a row and is expected to remain in place through the spring. The phenomenon involves changes in sea surface temperatures and air pressure in the equatorial Pacific Ocean, which can affect weather patterns around the world and has specifically contributed to California’s drought.

La Niña and its counterpart, El Niño, are part of a naturally occurring cycle, but climate change may increase their frequency and intensity.

NOAA also issued a spring flooding outlook on Thursday, identifying the highest risk in areas along the Red River, which divides Minnesota and North Dakota. (The forecast identifies only regions that are at risk based on underlying factors like saturated soil from sustained, heavy precipitation; any area can experience sudden flooding from a severe storm.)