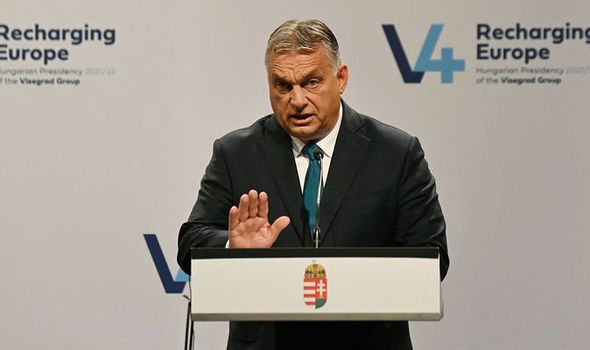 The ruling puts the country at odds with the European Commission, which has been in a years-long battle with Hungary over migration. It follows a ruling last month by Poland’s Constitutional Tribunal, which said that the Polish constitution has primacy over some EU law.

The European Parliament is now suing the European Commission to trigger a mechanism against Poland and Hungary intended as a response to democratic backsliding.

However, the European Commission said it was awaiting a European Court of Justice (ECJ) ruling on the legality of the tool, which would withhold funds from member states it targets.

A requirement of membership to the EU is that its law supersedes that of individual member states.

In 2018, the Hungarian government passed a bill which it dubbed the “Stop Soros” law – a reference to the Hungarian-born, American Jewish billionaire who is a frequent government target.

The law prevented people from applying for asylum in Hungary if they came from a country where their life and freedoms were not at risk.

It also made illegal individuals and organisations from helping illegal migrants claim asylum in the country.

Following the passing of the law, the Mr Soros’s Open Societies Foundation moved its international operations from Budapest to Berlin.

Today, the ECJ found that by passing the law, Hungary had “failed to fulfil its obligations” under EU law.

The ECJ ruled Hungary could not dismiss asylum applications on the grounds it had stated in the 2018 law.

It did so as the EU already had an “exhaustive” list of reasons to reject such applications, but the ones Hungary had produced were not among them.

It stated: “The ground for inadmissibility introduced by the Hungarian legislation corresponds to none of those situations.”

The ECJ also said that Hungary could not criminalise assisting asylum seekers, as that restricted the right of an individual to communicate with asylum seekers and for migrants to seek legal counsel.

After Hungary passed the law, the European Commission sent a letter of formal notice to Budapest for violating the EU’s

Zoltan Kovacs, a spokesperson for Viktor Orban’s government, wrote in a statement: “we reserve the right to take action against the activities of foreign-funded NGOs, including those funded by George Soros, seeking to gain political influence and interference or even to promote migration.

“Hungary’s position on migration remains unchanged: Help should be taken where the problem is, instead of bringing the problem here. In other words, migration to Europe must be stopped and Europe’s future must be based on families.

He added that the law “and its objective has been repeatedly supported by the Hungarian people”.

“As long as there is a national government in Hungary, it will enforce the will of the Hungarian people and prevent Hungary from becoming an immigrant country.”

At the beginning of October, the Polish tribunal ruled that some parts of EU treaties are incompatible with the Polish constitution, thereby challenging a pillar of European integration.

The decision was welcomed by Jaroslaw Kaczynski, the leader of the largest party in Poland’s governing coalition.

He said that any different ruling would effectively mean that “Poland is not a sovereign state”, and insisted that the EU had no right to interfere in the country’s administration of justice.