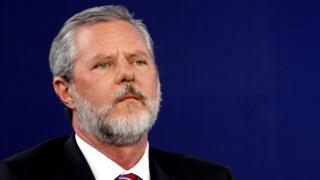 The influential head of a major US evangelical college has resigned after allegations about his private life.

Jerry Falwell Jr took a leave of absence earlier this month after posting a photo of himself with trousers unzipped on Instagram.

Further scandals have since emerged, including someone who claimed to have had a sexual relationship involving Mr Falwell Jr and his wife.

No official reason has yet been given for his departure.

A prominent supporter of US President Donald Trump, he took over at the college after the death of his father, Jerry Falwell.

Mr Falwell Sr founded the university in the 1970s as well as the conservative Moral Majority movement.

What are the allegations?

Mr Falwell Jr was already under scrutiny for a photograph he posted online earlier this month. He appeared in the image with his trousers unzipped and his arm around a woman.

The image provoked outrage and charges of hypocrisy from the political right and left, and calls for Mr Falwell to resign.

But further allegations have emerged. Giancarlo Granda, a business partner of Falwell Jr’s, told Reuters news agency on Monday that he had a six-year sexual relationship with the evangelical leader and his wife, Becki Falwell.

“Becki and I developed an intimate relationship and Jerry enjoyed watching from the corner of the room,” Mr Granda reportedly said in an interview.

Mr Falwell Jr has not commented on the allegation. On Sunday he released a statement to the Washington Examiner saying his wife had had an affair and that the man involved had threatened to “deliberately embarrass my wife, family, and Liberty University”.

He also spoke of the “emotional toll” the affair had had on him.