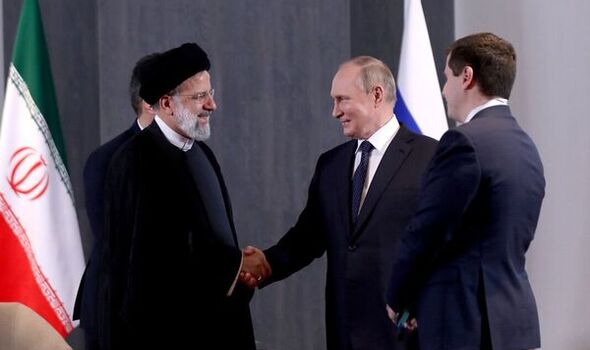 The stark warnings come as  US and UK intelligence reveal both countries plan to launch joint production of “killer” drones in Russia, while the Islamic Republic supplies Vladimir Putin with ballistic missiles to fill up Russia’s now severely-depleted stockpiles.

“A large number fo Iranian ballistic missiles will (enable Russia to) continue to expand its of campaigns os strikes against Ukrainian infrastructure.”

Former Nato planner Philip Ingram said: “It is clear that the real concern is that Russia will help Iran develop nuclear weapons.”

There is precedence for this, in the support Russia has given to North Korea’s nuclear programme.

“Since then, North Korea’s missile programme went from being unsuccessful for short range missiles without a working nuclear warhead, to now being successful with Inter Continental Ballistic Missiles. I guarantee that the people working on it don’t speak Korean,” he said.

But, while Moscow may dangle the nuclear carrot and even help Iran restore  its centrifuges in return for munitions, it may stop short of giving Iran the bomb, said Keir Giles, author of ‘Russia’s War on Everybody’.

“Russia and Iran make natural partners in crime. They both want to be able to carry out aggression abroad and repression of their own people at home without any obstruction from the interfering West,” he said.

“But, for Moscow, possession of nuclear weapons is one of the key badges of being a “great power“ in the way Russia defines it – and that’s not a status that Russia is keen to see undermined by sharing it around.”

Yesterday former PM Boris Johnson urged western countries to “look urgently” at what more they can do to support Ukraine to end the war against Russia next year.

Writing in the Wall Street Journal, Mr Johnson – who, as PM,  led the European response to aid Ukraine following Russia’s February 24 invasion –  said that while the significant financial commitment to Ukraine is “painful” during a period of budgetary constraints, “time is money, and the longer this goes on the more we will all end up paying in military support”.

He added: “There is no land-for-peace deal to be done, even if Mr Putin were offering it and even if he were to be trusted, which he is not.”

“Since the war can end only one way, the question is how fast we get to the inevitable conclusion.”