U.S. President Donald Trump is spending Election Night behind an extra layer of security at the White House, where authorities have temporarily erected a fence to protect him from potential protesters for a second time this year.

New anti-climb fencing went up around the White House on Monday, sparking tongue-in-cheek accusations that Trump had finally built the “wall” he’s been working to finish throughout his first term.

“Trump built a wall around the White House and we’re paying for it, not Mexico,” Bloomberg columnist Timothy L. O’Brien wrote in a widely-shared tweet.

The fence surrounds the White House Complex, Lafayette Square and the southern lawn known as the Ellipse, NBC News reports. Approximately 250 National Guardsmen have also been put on standby in anticipation of unrest.

Protesters had already started to gather outside the White House around 6 p.m. 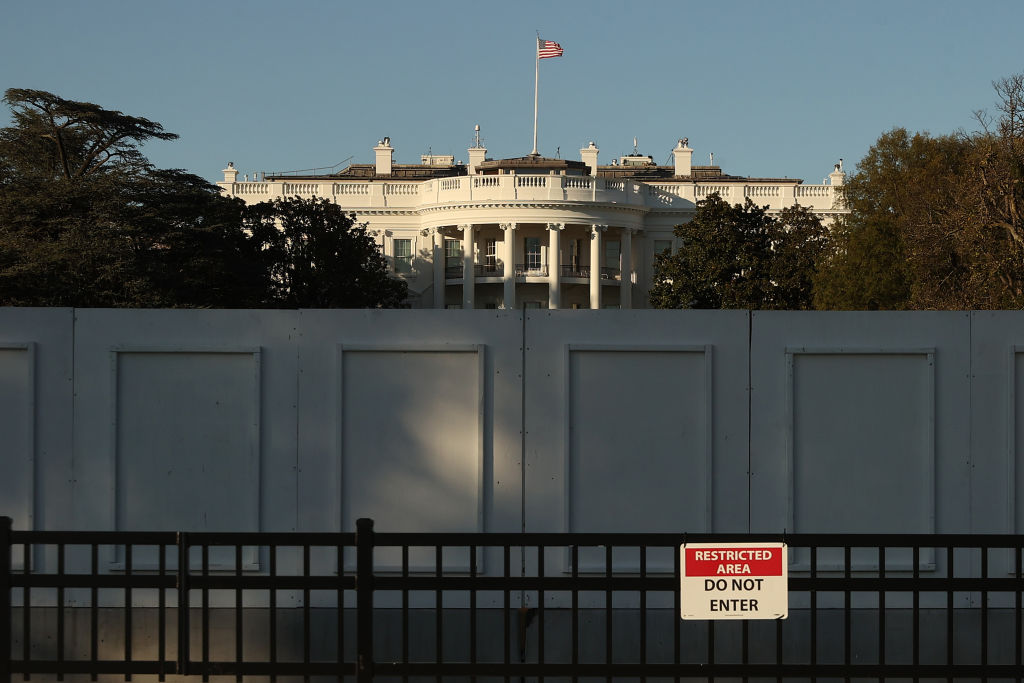 The White House barriers are reportedly identical to the ones put up around the White House earlier this year, when protests against police brutality and anti-Black racism swept through Washington, D.C.

Trump spent one particularly violent night of protests inside the White House, where he bragged about his Secret Service detail and tried to discredit the demonstrators on Twitter.

The New York Times later reported that Trump had spent up to four hours of that night inside the White House’s secure bunker, prompting critics to mock the president as “Bunker Boy.”

Trump’s staff ordered the National Guard to break up a peaceful protest outside the White House after the report emerged. Tear gas was deployed and the protesters were driven away, then Trump walked out of the White House with his cabinet for a photo op at a nearby church.

The White House fencing went up shortly after that incident.

The “Bunker Boy” nickname resurfaced on Twitter Tuesday, as thousands of people revived the hashtag in response to the fence around the White House.

“Never before in United States history has a president felt the need to wall themselves off from the public on an election day,” one popular user wrote, adding the hashtag #BunkerBoy on Twitter.

“Trump couldn’t get his wall up at the U.S.-Mexican border in 4 years, but he got the wall up around the White House in 4 hours,” comedian Dana Goldberg tweeted.

The White House has been planning a more permanent, anti-climb fence to surround the grounds since July 2016, when Obama was still in office.

The temporary election barriers went up amid widespread concern over violence in the U.S. this week.

Tiffany, Target and Saks Fifth Avenue were among the largest chains to board up their windows Tuesday.

Many businesses were also boarded up across the U.S., including major chains such as Target, Macy’s and CVS, according to NPR and CNN. Gun and ammunition sales have also reportedly surged in recent days, as they often do around a contentious election.

Trump has not been shy about using the seat of presidential power as a backdrop for his re-election campaign. He accepted the Republican nomination for president on the White House lawn earlier this summer, and is once again using the taxpayer-funded and protected building for the election night.

Barack Obama spent Election Day in Chicago when he won a second term in office in 2012.

Trump’s Democratic opponent this time, Joe Biden, will watch the results from his home in Wilmington, Del.

—With files from The Associated Press