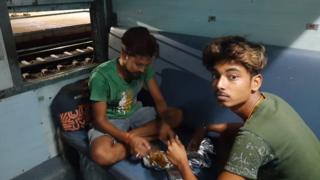 The first train carrying migrant workers stranded by a nationwide lockdown in India has left the southern state of Telangana.

Earlier this week, India said millions of people stranded by the lockdown can return to their home states.

The country has been in lockdown to curb the spread of coronavirus since 24 March.

However, the movement of people will be only possible through state government facilitation, which means people cannot attempt to cross state borders on their own.

This train is a “one-off special train” to transport the workers on the request of the Telangana state government, Rakesh Ch, the chief public relations officer of South-Central Railways, told the BBC.

The train left Lingampally, a suburb of the southern city of Hyderabad, early on Friday and is expected to reach Hatia in Jharkhand on Saturday.

Mr Rakesh said that adequate social distancing precautions had been taken and food was being served to the passengers.

He said each carriage was carrying 54 passengers instead of its 72-seat capacity.

“The middle berth is not being used in the sleeper coaches and only two people are sitting in the general coaches,” Mr Rakesh said.

Before the train pulled out of the station, all the passengers were screened for fever and other symptoms.

They had all been employed at a construction site at the Indian Institute of Technology, a top engineering school, in Hyderabad city.

The workers had earlier protested at the site against the non-payment of wages by their contractor.

Senior official M Hanumantha Rao said the contractor was asked to pay their salaries and arrangement made to send them back home.

“We screened them at the labour camp itself and transported them to the railway station in buses,” he said.

Most of the country’s estimated 100 million migrant workers live in squalid conditions.

When industries shut down overnight, many of them feared they would starve.

For days, they walked – sometimes hundreds of kilometres – to reach their villages because bus and train services were shut down overnight. Several died trying to make the journey.

Some state governments tried to facilitate buses, but these were quickly overrun. Thousands of others have been placed in quarantine centres and relief camps.