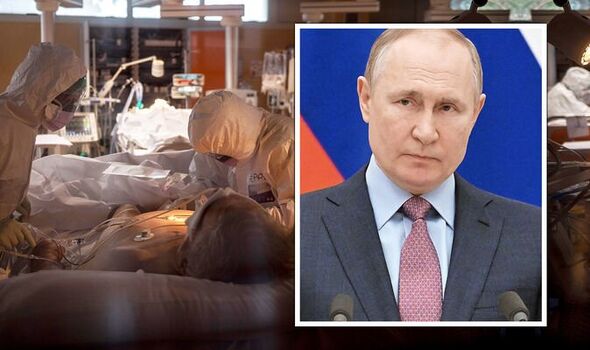 Putin, who has controlled Russia with a rod of iron for more than two decades, engineered a change in the constitution last year allowing him to remain in office for life. But the 69-year-old has been mired by rumours of ill-health, prompting some to suggest this may be a hugely motivating factor in the timing of his botched invasion of Ukraine.

And one – or even both – of these factors may spell his political demise.

“I think he’ll be gone by 2023 – but probably into the sanatorium, from which he will not emerge as the leader of Russia.

Former spy Christopher Steele, who once operated in Russia as an MI6 agent, said there was “no political leadership” coming from Putin. He told LBC: “Our understanding is that there’s increasing disarray in the Kremlin and chaos. In military terms, the structures of command and so on are not functioning as they should.”

Putin, a former KGB colonel, was once famed for his staged bare-chested poses but speculation over his health has been intensifying over the past six weeks.

In March, the Sunday Express revealed Pentagon analysts had concluded he had developed cancer after conducting “forensic” examinations of photographs and broadcasts spanning five years.

A Russian oligarch purporting to have close links with the Kremlin then revealed Putin was “very ill with blood cancer”.

And last week the head of Ukraine’s military intelligence, Major General Kyrylo Budanov, claimed a coup was under way.

Sir Richard’s view was echoed by former Nato supreme allied commander for Europe, Admiral James Stavridis, who told the podcast: “If you want to steer the ship of Russia, you’ve got to do it with the hands of Putin on the wheel. Putin’s health may be the most determinative path to the change in the course of the Russian ship.”

While the claims have not been confirmed officially, they represent a problem for the Kremlin, said Professor Mark Galeotti, author of We Need to Talk About Putin.

“It’s clear there is something wrong with Putin. Those I’ve spoken with don’t think it will lead to an imminent incapacitation or death but it will become more of an issue,” he said.

“He may become less credible to the elite. It makes people think about transition, and this begins to make him something of a lameduck president.”

Prof Galeotti, of the RUSI think tank, added: “My theory is that part of Putin’s motivation for Ukraine was to achieve what he considered to be a crowning legacy before retiring as some elder statesman with permanent lifetime immunity from prosecution.

“Given the state of his health and Russia’s economy, he is unlikely to relish the painful prospect of running a campaign in 2024.”

The state of Russia’s military campaign – which Putin is now believed to be directing personally – may be a contributing factor.

However, Oscar-winning director Oliver Stone claims Putin has suffered from cancer in the past – but had overcome it.TheAmerican filmmaker was granted unprecedented access to the Kremlin leader over a two year period and made the claim in a new podcast.

Last week, retired Russian colonel Mikhail Khodarenok launched a remarkable critique on Russian TV, saying: “The biggest problem with our military and political situation is that we are in total political isolation and the whole world is against us, even if we don’t want to admit it.We need to resolve this.

The situation cannot be considered normal when, against us, there is a coalition of 42 countries and when our resources… are limited.”

Prof Galeotti added: “Putin might reach a point where his range of options is limited and his choice becomes: would you like a sanatorium or a mortuary?

“Three months ago Putin’s natural successor was defence minister Sergei Shoigu. The most dangerous thing is to be publicly discussed as a Putin successor. But Shoigu is younger, and there’s no way he cannot in some way be thinking of his future.”

Viktorija Starych-Samuoliene, of the Council on Geostrategy, said: “The political and military elite is trying to send the message that they are dissatisfied and are preparing the Russian public for the fact that Russia is in trouble.”