Hannah Selinger’s long essay for Eater about her time working for David Chang was published just before Christmas, at the end of a punishing, turbulent year for chefs and food media.

While restaurants were forced to close and then reopen under highly challenging conditions, food stars major and minor had been booed off the stage by a restive audience. Revelations that in another time might have been put to rest by a well-turned apology brought the curtains down on several acts.

With that recent past as prologue, it was hard to read Ms. Selinger’s essay without wondering if Mr. Chang was finally in for it this time. The curious thing about the piece, though, was that we knew most of it already, because Mr. Chang told us.

He has been talking for years about his explosive behavior, what Ms. Selinger calls “the wall-punching, desk breaking, violent threats and screaming” she witnessed, and was sometimes the victim of, after she took a job as corporate beverage manager for the Momofuku restaurant group in 2008.

She describes, in scorching detail, the time a young line cook was “brought to tears by Dave’s rage for cooking what was deemed a subpar family meal: ‘I will scalp you,’ Dave screamed.” This is one of the few Chang quotations in her essay that this newspaper can publish in full, which sets it apart from what he said he would do to the line cook’s family, or the lashing Ms. Selinger says he gave her in front of her staff for buying a sparkling Moscato to go with one course on Momofuku Ko’s tasting menu. 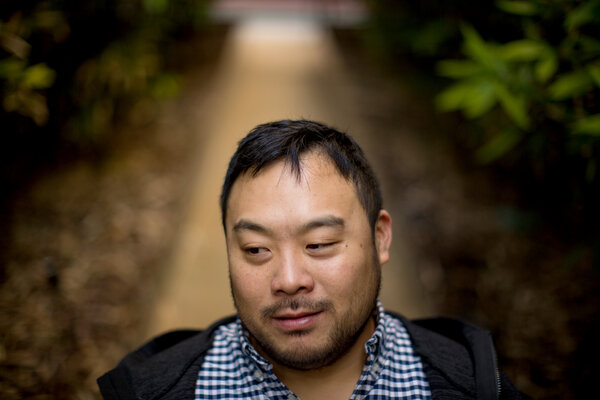 Whether these episodes have been brought to light before is hard to verify, simply because the literature of David Chang losing his cool is so vast. From the moment reporters first took an interest in his cooking, Mr. Chang has been talking about his failings as a cook, a manager and a human. His built a bonfire of his own shortcomings, feeding it almost every time he opened his mouth with new kindling and fresh profanities.

His memoir, “Eat a Peach,” published in September, is a catalog of his anger-management problems alongside a history of his mental-health issues, which include depression and bipolar disorder. If Ms. Selinger’s account of working for Mr. Chang doesn’t cause the public’s view of him to plummet, the explanation may be simple: To put it in Wall Street terms, the information was already priced into the market.

Still, the essay is hard to shake off. Ms. Selinger may not tell us much we didn’t already know about Mr. Chang himself, but she paints a vivid picture of what it was like to be around him and the people he put in charge. It is one of the most detailed accounts ever written about the effects on restaurant workers of being routinely used for target practice by a chef or manager. There is the breath held while waiting for the next tantrum, the contagious disrespect that infects other supposed leaders and, perhaps worst of all, the slow rotting away of self-esteem.

Until recently, when we heard stories like this, they were told by chefs. Screaming and pot-throwing were things they endured in their younger days, part of the dues they paid. Some of them also copped to having bullied their line cooks and dishwashers early on, when they first got their own kitchens and followed the bad examples of their own abusive mentors. Breaking the chain is both a personal achievement and a step toward more modern and humane management practices.

Such stories rarely linger on the victims the chef has left on the floor in a finely shredded chiffonade. In their lives, abuse may not be a station on the path to fame. It may not be redeemed by later success. It may not give them the opportunity to do better when their turn comes. It is just abuse.

We are hearing these stories now, though. At first they came from female restaurant workers who spoke out about sexual harassment. People listened. They were outraged, rightly. Things changed. This encouraged restaurant workers to talk about other kinds of mistreatment. Many of these accusations, sometimes divulged to reporters but more and more often spilled on Instagram posts and comments, fall on a spectrum from scalding tirades like those Ms. Selinger describes to less nightmarish bad-boss behavior, like playing favorites and taking credit for an employee’s work.

Some allegations seem intended to force bad actors to self-defenestrate, but others have a much more basic message: Hello. I’m here. And I’m sick of this.

If you’ve ever been treated poorly by a boss or other authority figure, you can’t help identifying with some of these voices. Restaurant workers have traditionally labored in silence — the chef or the owner was the only one who got to talk. Now the microphone can be commandeered by almost anybody, for a few minutes at least, and it’s changing the way we look at restaurants.

We always knew they were group efforts. Now we can see the individuals in the group. And if they’re suffering, we can feel their pain.

Empathy is in short supply lately. Every few days, Covid kills more Americans than died on 9/11, and the nation can’t even come together to grieve for them, let alone to march in the streets. Instead, we fight about masks.

Just before Christmas, a customer at the Grand Prize Bar in Houston who was angry because he’d been asked to wear a mask broke a glass over the head of Joshua Vaughan, a bar back. The wound required 10 stitches.

Lindsay Beale, who manages the bar, told a local reporter that the mask policy was put in place because “we just want to do right by everybody, and we want those who want a safe place to go to have one.”

Every day, hospitality workers put their safety on the line for us. It is deeply depressing that some customers refuse to recognize the risks they take just by showing up to work — refuse to consider their safety, refuse to see them as fellow humans who are trying to live to the end of this plague.

Of course, most people are not sociopaths. They may not mask up when a server comes to the table, but they tend to comply when asked. And many restaurant customers have responded to the crisis with kindness. Almost everyone I know is tipping more than usual, in some cases as much as 50 percent. They’re tipping on pickup orders and the groceries that restaurants sell, too.

Our ideas about what’s acceptable workplace behavior have been changing rapidly. Mr. Chang’s circa-2008 tirades were extreme, but less florid versions were routine in many kitchens. (And not just in kitchens; young reporters and editorial assistants were screamed at and demeaned, too, although the screamers didn’t usually have knives.) A culture of terror is growing into a culture of respect, and with that comes a growing recognition that workers are not just “human resources” but actual humans.

One theme of Ms. Selinger’s essay is her hope that Mr. Chang will make some kind of restitution for the way he acted back then. As a start, she suggests “releasing every former employee from any nondisclosure agreement that prevents them from talking about what they experienced at Momofuku.”

A spokesman for the company said that Momofuku, like most highly organized restaurant groups, requires its managers to sign nondisparagement clauses that keep them from bad-mouthing fellow workers and customers. These contracts do not bar employees from cooperating with investigations into sexual harassment and other crimes, but they could make somebody think twice before complaining on social media or talking to a reporter about a workplace problem that might not be illegal.

This is bad for employees, who might be waved away from bad employers if information flowed more freely, and in the long run it’s not good for restaurants, either. Restaurants can find ways to keep employees from, say, using Instagram to shame bad tippers or gossip about famous customers without muzzling them completely.

Among his talents, Mr. Chang has a gift for spinning pain into gold — both his own pain and the pain he caused other people. All his confessions have only added to his fame. He does deserve credit, though, for opening up about his mental illness. Restaurant work attracts people who have trouble fitting in elsewhere and then puts them under ferocious pressure that, in many cases, multiplies their troubles. These stories need to circulate, too.

All year, those of us who love restaurants have been talking about loving them and missing them and rooting for them to survive. While we’re doing that, maybe we can spare some empathy for the people who’ve been hurt by restaurants.