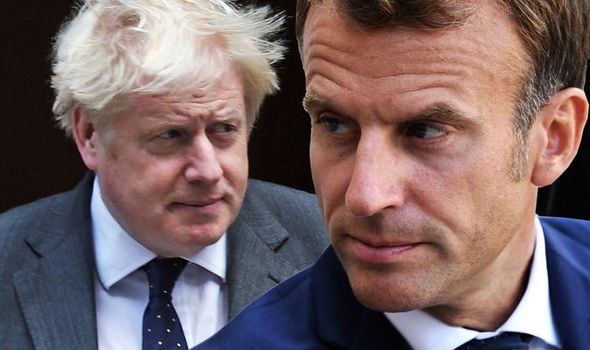 The new defence pact will see the UK, America and Australia share military and scientific resources. And Australia will be given the technology to build nuclear-powered submarines. However, Canberra has now cancelled a £47billion contract with France to build 12 diesel electric subs.

The move, described as a “stab in the back”, has left France fuming. But experts say it shows “global Britain” in action and is vital to stemming China’s power.

Last night Jean-Yves Le Drian, the Foreign Minister in Paris, on Saturday said his country had been the victim of “duplicity, contempt and lies”.

But when asked on the France 2 radio station why his Ambassador to London had not been recalled as well as the American and Australian ones, Mr Le Drian suggested there was no need.

France was familiar with Britain’s “permanent opportunism” and Boris Johnson was the “fifth wheel on the carriage anyway”, said Mr Le Drian.

He said Australian Prime Minister Scott Morrison had told him about the ripping up of the submarines contract just an hour before the new AUKUS deal was announced on live TV on Wednesday.

“That’s why I say there has been duplicity, contempt and lies and when you have an ally of the stature of France, you don’t treat them like this,” said Mr Le Drian.

France cancelled top level talks between Defence Secretary Ben Wallace and his French counterpart Florence Parly, which had been due this week.

Also scrapped is Thursday’s key Franco-British Council defence summit in London, which was to have been attended by a number of French military officers and diplomats, including French ambassador Catherine Colonna, as well as her new British counterpart, Menna Rawlings.

Jean-Pierre Maulny, deputy director of the French Institute for International and Strategic Affairs, said: “Most of the anger is being directed to the US, with Australia second and the UK third, because the perception is that it is the US which really pulled the strings. We understand why it was well received by both the UK and Australia, but we assume the US led it.”

The US was approached and agreed to the unprecedented step of sharing nuclear technology with another Five Eyes partner with an aligned policy on how to contain Chinese territorial ambitions in the South China Sea.

He added: “This is far more than just a diplomatic spat, the withdrawal of ambassadors is the tip of the iceberg.”

However, Whitehall insiders remained sanguine, revealing that while they had expected a “short-term storm” in Anglo-French relations, the importance of strong diplomatic and military ties with Paris remained “paramount”.

They noted, too, that President Emmanuel Macron, whom M Le Drian said was “burning with anger and indignation” faces elections in April.

There would be little impact on the Lancaster House Treaties ‑ the Anglo-French defence pact established in 2010 ‑ because, under Mr Macron “there has been little political will to energise it”.

Maritime strategy expert Dr Alessio Patalano, of King’s College London, said: “Under Macron a number of detailed pieces of coordination and cooperation have not been fulfilled to the same level as before.

“The difficulty isn’t with the treaty, but rather lack of political incentive at the French level to continue to move towards objectives such as creating shared intelligence platforms, information sharing, organising and coordinating operations.”

But France’s reaction also ignores the fact it is not capable of delivering what Australia considers it now needs.

The new pact, described by UK national security adviser Sir Stephen Lovegrove as “perhaps the most significant capability collaboration in the world anywhere in the past six decades”, will see Australia acquire eight nuclear powered submarines that are capable of longer-range deployment in the vast waters of the South China Sea and Pacific.

And it was Boris Johnson who ensured the pact was broadened beyond just submarines.

But France’s Europe Minister Clement Beaune branded Britain a “junior partner”, saying the UK had accepted the “vassalisation” of the US.

He said: “Our British friends explained to us they were leaving the EU to create Global Britain. We can see that this is a return into the American lap and a form of accepted vassalisation.”