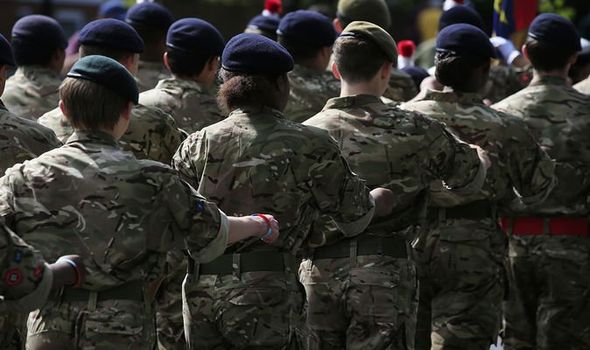 Strict regulations brokered by the Ministry of Defence mean that serving members of the armed forces must have served at least five years in order to be eligible.

So while most officers will receive the gong, an estimated 50 per cent of soldiers, sailors and aviators who have served a day less than five years will go without.

To add insult to injury, staff attached to the royal household need to have worked for only 12 months.

The current rules follow the template set down for the Queen’s Golden Jubilee Medal in 2002, to celebrate the 50th anniversary of her reign.

Even those rules were then relaxed, however, and exceptions were made to allow both Princes Harry and William – even though they had only served 11 months in uniform at the Royal Military Academy Sandhurst as part of their training and did not qualify.

The new Chief of the Defence Staff, Admiral Tony Radakin, made it clear before he was appointed that he would pursue a policy of ‘inclusion and diversity’ in all areas of the armed forces.

But the post-Iraq and Afghanistan legacy has left the armed forces – and particularly the Army – battling against a retention crisis, with many soldiers choosing to leave after they have served their minimum four years.

It also means that there are fewer opportunities to be awarded campaign medals.

Last night former senior generals called for the rules to be changed.

“Medals are always a contentious issue because they are so culturally significant in the armed forces: part CV and part a visible statement of ‘form’,” said Gen Sir Richard Barrons, who headed Joint Force Command until 2016.

“The five-year boundary will be divisive at unit level, as many who are committed and significant, such as junior NCOs and junior officers, will feel under appreciated. They will point out the different rules for the royal household.

“As medals are effectively free, issuing them in ways that annoys large numbers of people one wants to hold on to strikes me as a self-inflicted wound.

“In my view, the rules should be changed so that those who have served at least one full year are eligible.”

Former Chief of the General Staff, Gen Lord Dannatt said: “In the post-Iraq and Afghanistan era many, young soldiers will have no medals, whereas their superiors, who are ten or 15 years older, may be wearing six or seven.

“There is a gentle case to be made to ask for the five-year rule to be looked at again. Changing the qualification to three years would  scoop up more soldiers who currently don’t have a single medal to wear on their chests.”

“So many are now leaving after the minimum served of four years. I have no doubt in my mind that issuing more medals would encourage soldiers to continue to serve.

“My view is that anyone who is serving on the day the medal is issued should receive it.”