After moderating a panel on the climate crisis, Melissa Clark suggests a few recipes that are on her mind. 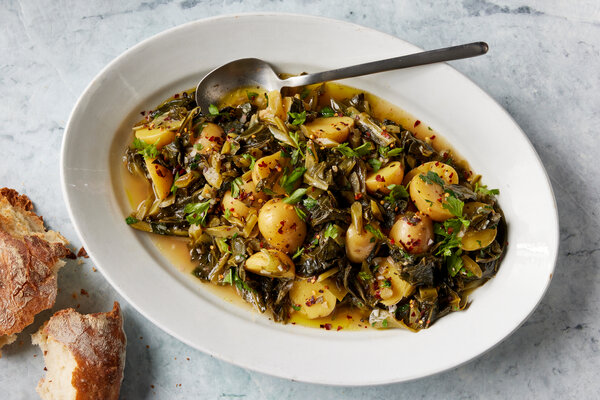 Food is linked to everything, and that includes the climate. Last week I attended “A New Climate,” a New York Times event covering the intersection of the climate crisis and technology (one of a series of live and virtual climate-focused events). I was there to moderate a panel on food, specifically looking at plant-based meats and regenerative agriculture as two ways to transform our food system.

As The Times has covered before, emissions from the meat and dairy industry account for about 14.5 percent of all global greenhouse gases, which is the same as the amount from all modes of transportation — cars, trucks, planes and ships — combined. This is a disheartening number, and the two panelists, Ethan Brown, the founder and chief executive of Beyond Meat, and Claudio Nuñez, the conservation grazing manager at the Santa Lucia Conservancy, had radically different approaches to mitigating the climate crisis. But I came away from the panel energized and excited about the goals: to help reduce factory farming, to actively rejuvenate grassland (and forests) to sequester carbon and encourage biodiversity, and to foster a diet that cuts down on meat and dairy.

And here we can aid the cause in the most delicious way possible, starting with ideas for what to make for dinner tonight. We’ve got loads of excellent meatless recipes, including Kay Chun’s garlicky braised greens and potatoes (above), a riff on a Roman classic that can be served on its own, or paired with grains or pasta for a heartier meal.

Ali Slagle’s deluxe vegetarian Bolognese, an alternative to the meaty original, is perfect to bookmark for your next festive gathering. Another party idea: Alexa Weibel’s skillet spanakopita, which is easier than most other versions, and just as chic.

For seafood lovers, shellfish like farmed mussels and oysters are highly sustainable options. They’re also very quick to cook. You could whip up this velvety stew of white beans and mussels in about 20 minutes; it tastes rich and complex, like you’ve been simmering it all day. Or for something more ambitious but very special, you can’t do better than a batch of homemade fried oysters.

Would you like a salad to round out the meal? Try David Tanis’s shredded carrot salad with cumin instead of a more quotidian green salad (unless it’s this one with grainy mustard). And for dessert, these spiced pumpkin cookies are perfect for dunking in a nice cup of herbal tea, or a tea-based toddy spiked with rum and amaro.

You do need a subscription for our recipes. Every subscription helps to support our work, so we can add to the thousands of well-tested recipes already available at New York Times Cooking. You can also find us on YouTube, TikTok and Instagram. And for more ideas for vegetarian recipes and techniques, Tejal Rao writes an informative and lyrical weekly newsletter, The Veggie, that comes out every Thursday. It’s a true highlight of my inbox, and you can subscribe here.

Art was part of “A New Climate” as well — not as an escape from the issues, but as a way to comprehend them. Painters of course have been taking a hit recently (especially van Gogh), but paintings are materially helping scientists determine the effects of a warming world. And there was music, too, excerpts from a three-part concert, “Treelogy,” that were performed over the course of the day.

So many other musicians are engaging directly with climate change as well. Brian Eno does it with deep-fake bird song in his new album, while Julia Wolfe goes the multimedia route in her upcoming “unEarth.” They’re teaching me to hear not only the changes in the landscape, but also the sound of what Eno calls “the biggest social movement in human history” — the people who want to fix it.