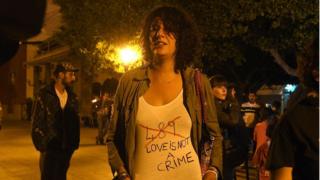 Gay men are being harassed and abused in Morocco after photos taken from gay chat apps were circulated online.

Photos spread after a social media influencer told her followers to make fake accounts on apps to see how common homosexuality is.

Homosexuality is illegal in the conservative Muslim country, which is in lockdown because of coronavirus.

The restrictions mean many men are unable to leave their homes where families abuse them, activists say.

One man, a student who returned from France during the lockdown, killed himself after being identified as gay, Moroccan media report.

Three LGBT organisations who support gay men in Morocco have told BBC News that men are being harassed and are at risk in the country after the photos spread.

Samir el Mouti runs a Facebook group called The Moroccan LGBT Community, which gives advice and support to LGBT people, many of whom conceal their sexuality.

The number of men reporting abuse and asking for help has increased since the online campaign began, says Mr Mouti, who left Morocco to study for a PhD in the UK.

“I’m in great trouble. Everyone knows now that I’m homosexual, and my neighbour sexually harassed me, so I decided to flee,” he told the group.

“I have nowhere to go – especially during lockdown.”

The outings began when transgender model and influencer Sofia Taloni used an Instagram Live to encourage women in Morocco to set up fake accounts on gay chat apps.

In doing so, she said they would discover how many men use the platforms, including potentially “their husbands and brothers”.

She said her aim was to call out hypocrisy in Moroccan society by showing people how many men are secretly gay in the country.

Many men use apps including Grindr as a way to connect in private, because LGBT organisations or meeting places are illegal in Morocco.

Now activists are encouraging men to close their accounts to protect themselves.

However, photos of men quickly started circulating on other social media platforms, resulting in their abuse and harassment.

Ms Taloni herself had received the support of the Moroccan LGBT Community Facebook group in recent months, the group says.

The LGBT community in Morocco routinely faces discrimination and violence, but this campaign coincides with lockdown and the holy month of Ramadan.

“It’s a double-edged sword. You might be in lockdown with homophobic family, and with Ramadan, people are very concerned about morality, and things might get heated,” Mr Mouti explains.

“A lot of people become a watchdog for so-called wrongdoings and they are outing people, calling on them to repent,” Mr Mouti explains.

NGOs Nassawiyat and Kif Kif are also supporting men who have been outed.

If men feel forced out of their homes because of intimidation, they have nowhere to stay because hotels are closed and special permission is required to travel between cities, the organisations told BBC News.

Those who have not managed to leave their homes are in “severe situations” with their families, Nassawiyat explained.

But victims of abuse and harassment can expect no support from the police or government, activists say.

“The law is not on their side – that makes the situation dangerous because people cannot report crimes to the police and ask for protection,” says Mr Mouti.

Human Rights Watch is calling on the Moroccan government to enforce the right to privacy and decriminalise same-sex relations.

“The Moroccan authorities should immediately step in to protect LGBT people’s privacy and repeal anti-LGBT laws that can only fuel this homophobic behaviour,” it said in a statement on Monday.

“What we’ve seen is just the tip of the iceberg – many people are suffering in silence,” Mr Mouti says.