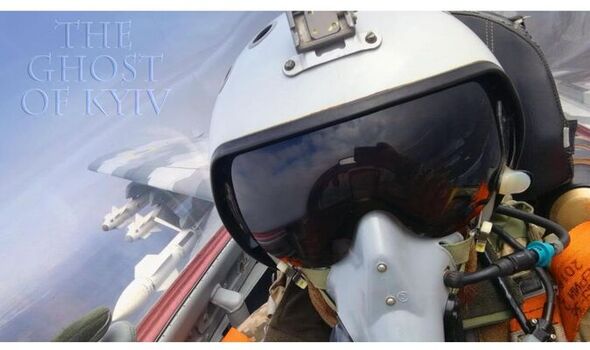 The picture, shared on the official Facebook page of the General Staff of the Armed Forces of Ukraine yesterday (Friday), shows a pilot wearing a black visor and oxygen mask in the cockpit on an MiG-29 fighter jet. His face cannot be seen, but the caption, addressed to Putin’s invading forces, reads: “Hello, Russian villain, I’m flying for your soul!” In the picture, the figure is shown gesturing to the missiles which the plane is equipped with.

Smirnova Vera adds: “Clear skies to you, our falcon, God’s help and protection! Glory to Ukraine!”

The photo is similar to one shared by Petro Poroshenko, Ukraine’s former President, on February 26, two days after Putin ordered the full-scale invasion.

Mr Poroshenko commented: “In the photo – the MiG-29 pilot. The same ‘Ghost of Kyiv’. It terrifies enemies and fills Ukrainians with pride.

“He has 6 victories over Russian pilots! With such powerful defenders, Ukraine will definitely win!”

In total, the Ukrainian military claims, the Ghost has shot down at least 10 Russian combat aircraft over the country, and has become a potent symbol of resistance in the face of Russian aggression.

Additionally, the term “Ghost of Kyiv” has also been applied to the whole of the Ukrainian air force, and as a way of symbolising the country’s fighting spirit.

Despite the publicity, there is of course no hard proof that the Ghost really exists, a fact acknowledged by Samuel Cranny-Evans, a Research Analyst at the Royal United Services Institute.

He said: “I think the main thing to note is that as part of an information campaign, it’s very effective.

“It does have precedent of course, reporting on German fighter aces for example, or Russian snipers with crazy high kill tallies in WW2 for example.”

Mr Cranny-Evans emphasised it was likewise impossible to prove the Ghost did not exist, given the vast number of rumours swirling around the country.

He added: “Typically, information Warfare should contain a kernel of truth. So, it’s possible there is a ‘ghost of Kyiv’ who has been relatively successful.”

The possibly-mythical airman is not the only such figure to gain traction in recent weeks. On February 26, claims began circulating on social media of a soldier nicknamed the Ukrainian Reaper, who had supposedly killed more than 20 Russian soldiers in combat.

At the beginning of the war, Russia was able to deploy 1,172 combat-capable aircraft, including 97 Su-35S Flankers, its latest fighter jets.

By contrast, Ukraine had 124 combat-capable aircraft, a figure which included 36 older MiG-29 Fulcrums.

However, despite its dominance, Russia has so far been unable to take control of the skies over Ukraine. The country’s military on Thursday claimed to have destroyed 49 Russian planes and 81 helicopters, as well as more 12,000 personnel, 335 tanks, 60 fuel trucks and vast amounts of other materiel.

Conversely, there are no indications of Ukrainian losses, and President Volodymyr Zelensky has pushed relentlessly for an international no-fly zone to protect his country – something so far firmly resisted by the United States and its NATO allies.

Even vehement opponents of US President Joe Biden have so far resisted the idea, with Republican Senator Marco Rubio warning it could bring about “World War III”.

No-fly zones were utilised frequently in the 1990s after the end of the Cold War – but experts say even when they have been effective, they required enormous resources to enforce, as well as for the opponent to be massively outgunned and under-protected, far from the case with Russia, which remains a military superpower.

Writing in the War on the Rocks online security platform last week, former US Air Force officers Mike Pietrucha and Mike Benitez said there was “no historical precedent to establishing and maintaining a no-fly zone against any meaningful resistance”.

Referencing 1998’s Kosovo War following the break-up of Yugoslavia, the pair noted that “despite a world-class air force’s best effort against a second-rate defence,” the United States never gained air supremacy and vital surveillance aircraft required to support the operation had to be kept out of the region to avoid being attacked.

They wrote: “Though Slobodan Milosevic did eventually capitulate, Operation Allied Force is generally viewed as an operational failure that happened to succeed – and that was over 20 years ago.”