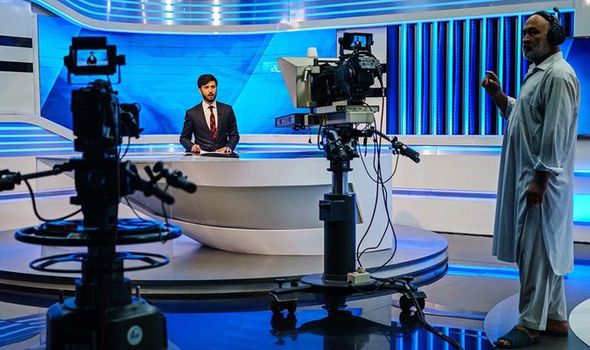 The Taliban crackdown has even forced some TV stations to provide three meals a day for fighters.

Access to official information is being curtailed and journalists are attacked if they try to cover protests.

Abdul Farid Ahmad, former deputy director of operations at Afghanistan’s TOLONEWs, told the Daily Express the Taliban only wants the media to act as a “propaganda platform”.

He described how they began hunting down journalists, threatening them, beating them and preventing them from doing their job.

Aid organisations, international media and those on the ground have warned of growing human rights abuses. And a functioning, free media is vital to exposing such abuses.

The Daily Express is this week supporting the Journalism Matters campaign which is highlighting the importance of trusted journalism to societies everywhere.

Mr Ahmad wants the rest of the world to act now.

“Some of them are under financial and political pressures and they don’t have another option for now but only to produce propaganda for Taliban.

“Some of the private stations provide Taliban soldiers with three meals a day from the TV budget. Soldiers started torturing journalists.

“They started calling and threatening journalists, showing up at their homes and asking for them, beating journalists and putting them in jail. They just learned to play the game.”

A media watchdog in Afghanistan warned that more than 30 instances of violence and threats against Afghan journalists were recorded in the last two months, with nearly 90 per cent committed by the Taliban.

More than 40 per cent of the cases recorded by the Afghanistan National Journalists Union (ANJU) were physical beatings and another 40 per cent were verbal threats of violence.

Meanwhile, more than half of the country’s population – some 23 million – are facing starvation in one of the world’s largest food shortages.

Describing the two weeks before he fled Afghanistan, Mr Ahmad said: “Their officials wouldn’t grant us permission to look into anything for investigative reports and we were kept away from facts and truths.

“I can confidently say what is being reported is only a small fraction of what is actually happening there.”