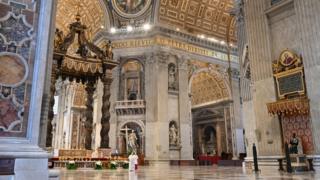 Pope Francis has called for global solidarity to fight the coronavirus crisis in his Easter message read to an empty St Peter’s Basilica.

“This is not a time for indifference. Because the whole world is suffering and needs to be united,” the pontiff said in a message broadcast online.

He warned that the EU risked collapse and urged debt relief for poor nations.

Around the world, services have been held in closed churches as millions of people have been told to stay at home. 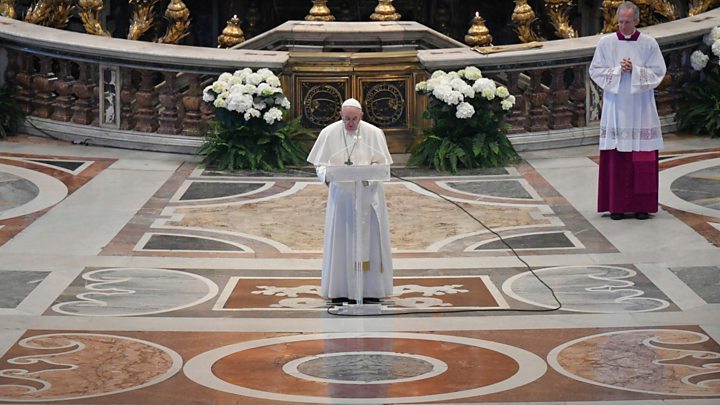 The leader of the Roman Catholic Church delivered his Urbi et Orbi (to the city and the world) message behind closed doors amid lockdown measures imposed in Italy, one of the countries hardest hit by the pandemic.

Saying this year’s “Easter of solitude” message should be a contagion of hope, he urged political leaders to work “for the common good”, to help people live through the crisis and eventually resume their normal lives.

“This isn’t a time for self-centredness because the challenge we’re facing is shared by all,” the pontiff said in a message almost entirely dominated by the effects of the outbreak, that has killed more than 109,000 people globally.

“Indifference, self-centredness, division and forgetfulness are not words we want to hear at this time. We want to ban these words forever!,” he added.

Without citing any country, the pontiff also called for the relaxation of international sanctions and praised doctors, nurses and other workers who were keeping essential services running.

The Pope, who usually delivers the message to tens of thousands of people gathered at the square outside the basilica, expressed particular concern for the future of Europe. He warned that the European Union risked collapse if it did not agree on how to help the region recover.

EU nations have been divided over how to mitigate the economic impact of the pandemic, with wealthier nations including Germany and the Netherlands blocking some demands from Spain and Italy, the region’s hardest hit so far.

The pontiff said it was “more important than ever” that rivalries that existed before World War Two did not “regain force”, adding: “The European Union is presently facing an epochal challenge, on which will depend not only its future but that of the whole world.”

At his Easter vigil service on Saturday evening, the Pope urged people not to “yield to fear” over the virus, calling on them to be “messengers of life in a time of death”.

He recalled the Biblical account of a woman finding Jesus’s tomb empty on the day Christians believe he rose from the dead.

“Then too, there was fear about the future and all that would need to be rebuilt. A painful memory, a hope cut short. For them, as for us, it was the darkest hour.”